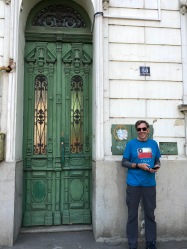 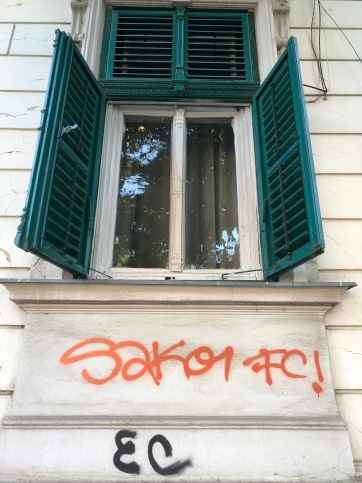 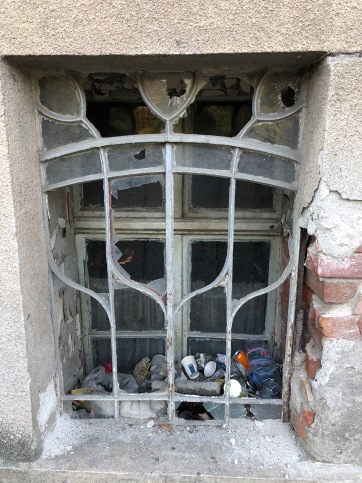 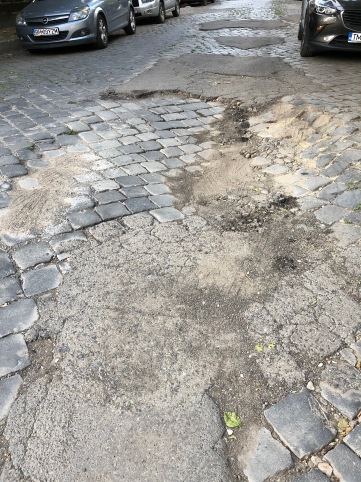 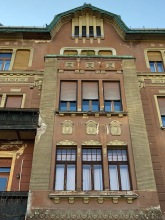 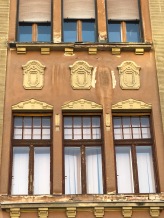 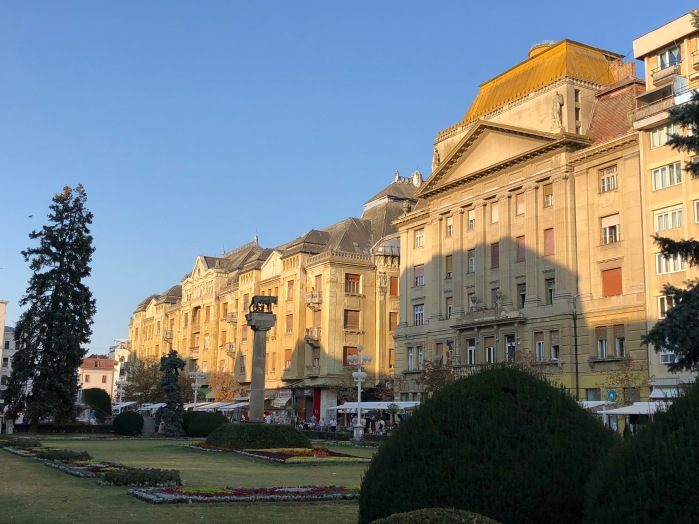 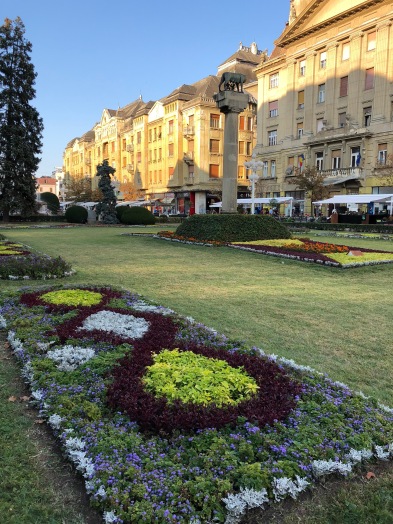 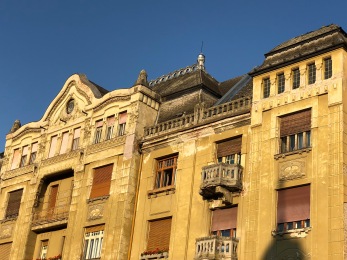 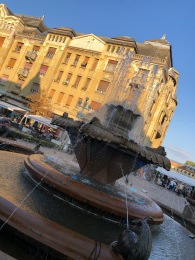 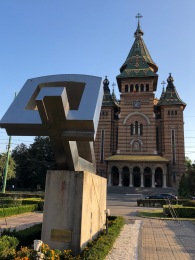 We felt considerably refreshed after our night in the hotel in Budapest. We would have happily stayed longer here, but with a dearth of local campsites, and wanting to get back on the road, we set off southwards. On our way out of Budapest, we made a detour to a camping shop that advertised Campingaz. In the end, it was only the little canisters that they sold, but we bought a couple along with a burner attachment, so that if necessary, we can boil the kettle outside, if we run out of gas in the van.

The drive was fairly tedious in the increasing heat. By 10am it was already recording 29 degrees, and it just got hotter. In some way, it was a relief to be in Oscar with the air-conditioning on. The countryside was very flat and arable. Yet again, we passed fields of sunflowers, and plenty of fields of maize. The small towns that we passed through were largely unremarkable, so whilst Howard concentrated on the driving (which did indeed require lots of concentration – the Hungarians take no prisoners!), I typed the blog.

We drove southwards towards Szeged, and then approached the Romanian border. En route, there was absolutely nothing alongside the road, just miles and miles of huge flat fields. Approaching the border, some of the lorries carrying livestock were filtered off to another route, and all the lorries had to divert over a weighbridge. We stopped at the only place that signed a toilet – a sort of large asphalt car park, full of stacked up lorries. The sign for refreshments, petrol and accommodation had been crossed off the board – and presumably what had been there previously was now raised to the ground, since the only building was a very primitive toilet, and a wooden booth selling vignettes for your vehicle. It had rather eerie feel about the place, and despite all the lorries, we didn’t see another soul.

As we came to the border, the queue of lorries backed up for at least two miles – our hearts sank. However, cars were still moving, so we continued on, and were pleasantly surprised to see only a short queue for cars. Romania, although a member of the EU, is not party to the Schengen agreement, and so passport control still exists – a sign of times to come in the UK! The border guard, though, seemed rather puzzled at our passports, and had to show them to another, more senior official. We wondered if she hadn’t heard of the UK – she certainly looked bemused. Whatever, we were waved through, and no-one took any interest in our e-vignette which we had purchased online that morning.

Driving into Romania felt like we were the only people on earth. There were hardly any heavy goods traffic (probably they were all still sat at the border!), and the cars had thinned out to a trickle. The land remained flat and featureless, with enormous arable fields on either side of the road, presumably a throw back to the days of collective farming.

Before not too long, we had arrived at our destination for the night, the city of Timisoara. We had investigated campsites, but reviews such as, and I quote, ‘don’t stay here… the toilets are bad….the electrical hookup is a deathtrap….hookups all unlocked with exposed electrical connections…the staff are basically grumpy and unhelpful…..the showers are broken, only one out of three worked… in all the sites we have stayed in throughout Europe, this is the worst.’ You get the picture! I must say, by now, Howard and I were hooting with laughter. Thankfully, for the price of a campsite throughout many places in Europe, you can bag a hotel room in Romania. So we promptly booked up a hotel online, and headed into town.

Timisoara is the third largest city in Romania. It was instrumental in the liberation of Romania from communism, being the first place in the country to show resistance to the regime. It was here, in 1989, that Father Lasz-lo Tokes stood on the steps of the Orthodox Cathedral, and condemned the Ceausescu regime, the spark that triggered the downfall of communism. Not before the police had killed 115 protesters here in Timisoara, and many more in the capital Bucharest, where the unrest spread. It is estimated that 1033 people lost their lives in one night alone in the main square in Bucharest, when Ceausescu ordered tanks to suppress the mass rally in December 1989. By noon the next day, the dictator and his wife were forced to fee the capital by helicopter, but later arrested, tried by an anonymous court, and executed on Christmas Day by firing squad. Romania was the only Soviet bloc country to fall with the death of a leader.

In 2021, Timisoara will serve as the EU’s Capital of Culture, and reading through our trusty Lonely Planet, it sounded an interesting place to visit. The aforementioned guide informed us that Romania was sprucing itself up, and that ‘fix-up fever’ had reached Timisoara, which as a result of this award, is ‘cleaning itself up at a feverish pace’. Sadly, none of this ‘tidying’ was in evidence to us.

We found the hotel, which was small, but lovely – a bit like an oasis in the middle of melee of dilapidation. We dropped off our bags, and set off on foot to explore. It was like walking in a city that time had forgot. There was certainly evidence of former elegance – leafy tree lined streets, grand baroque mansions, civic parks. But that is where the elegance stopped. Virtually every building we saw was in a state of extreme disrepair – with peeling paint, flaking masonry, rusty railings, rotting front doors. The streets were in need of a good sweep, and clearly no-one seemed to be taking any pride in the environment where they lived. It was quite sad. The only buildings that we saw that were pristine, were the churches, with fresh paint, and manicured gardens.

We walked into the town centre, with it’s large pedestrianised area. Here, at least, there was some attempt at a tidy up, with a splendid flower display taking centrepiece. The shops in the precinct were also thriving, although look up, and again, the beautiful baroque facades were crumbling.

Our conclusion is that Timisoara has a hell of a lot of work to do, to get the city up to scratch for their year as City of Culture. That being said, the people were all really friendly, and there certainly was an energy to the place.

Unusually, we chose to have supper back at our hotel. We were thrilled to find, yet again, we were being treated to live music – this time a very good female vocalist, singing songs so ancient that my dad would have loved them, as did I! For once, Howard was out-danced by the man at the table next to ours, who, much to his wife’s irritation, started ‘Dad-dancing’ every time a number came up that he recognised. His wife, periodically poked him in the ribs. I know just how she feels!!