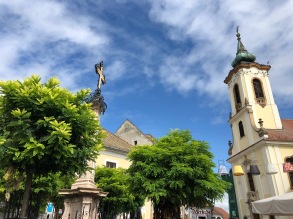 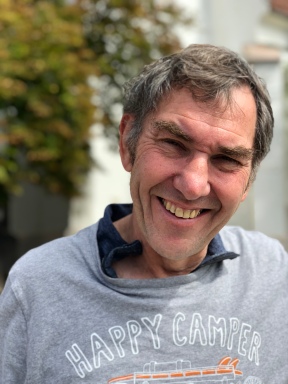 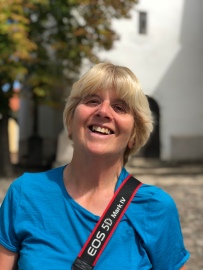 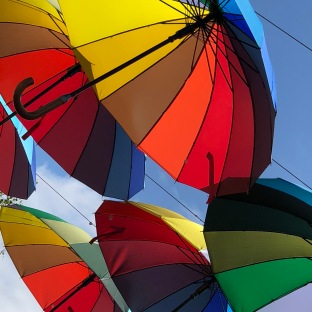 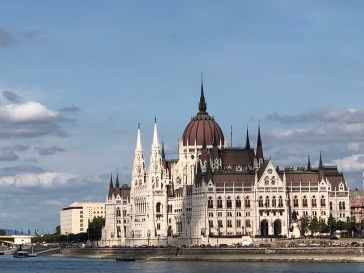 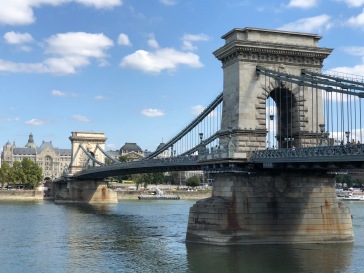 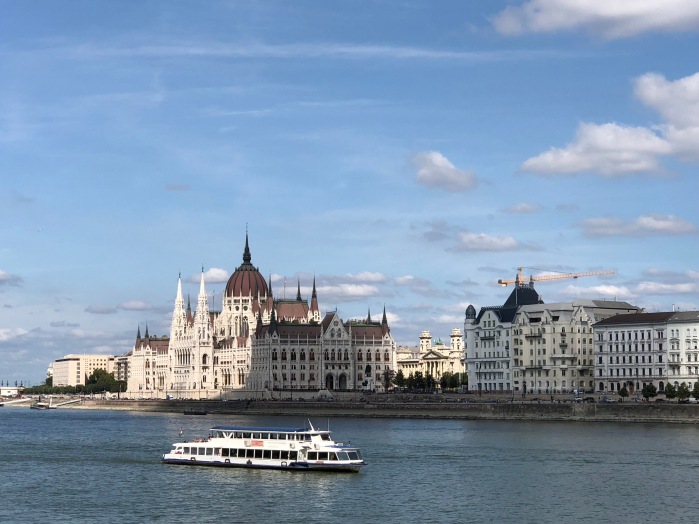 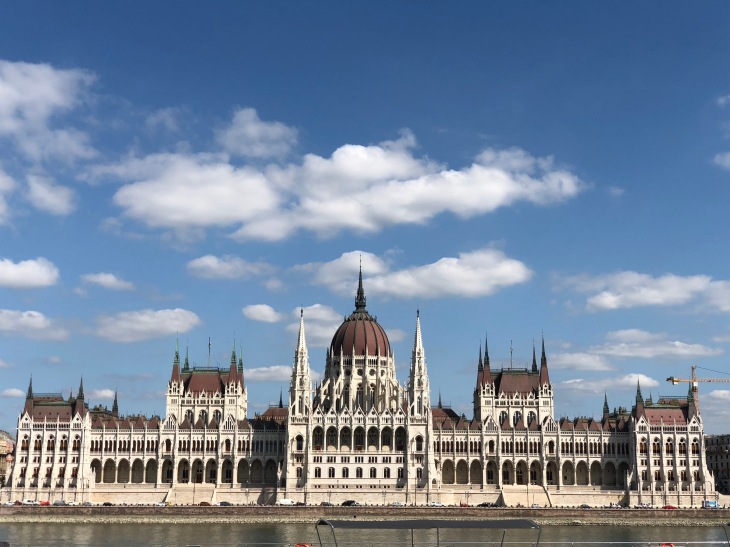 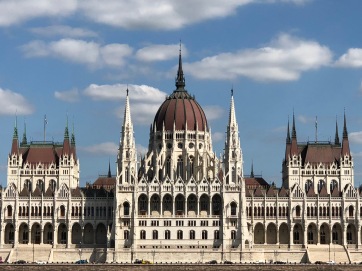 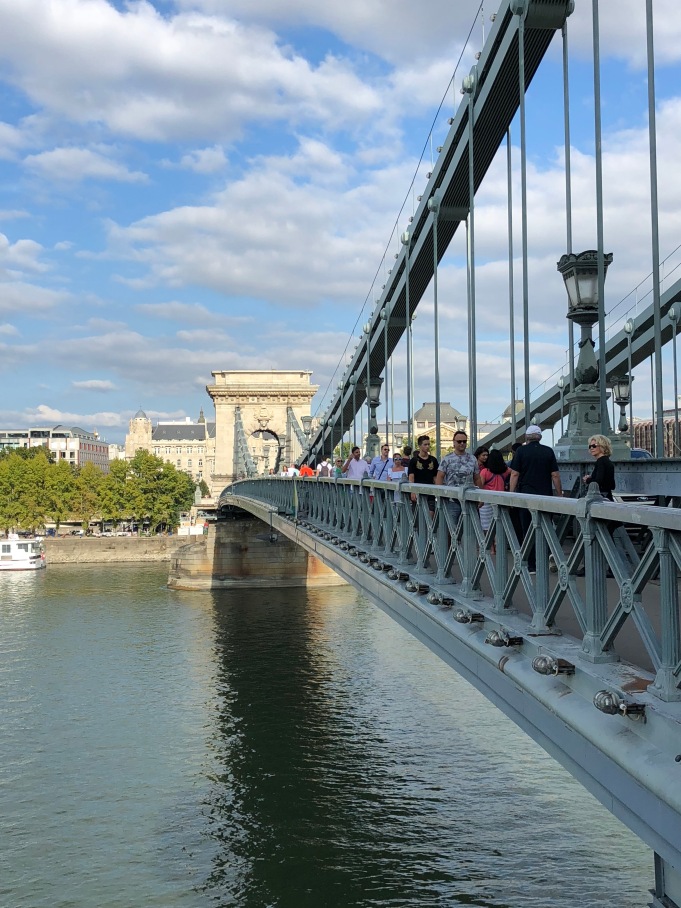 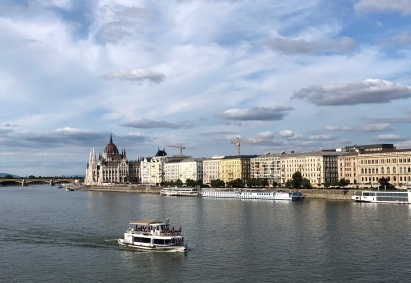 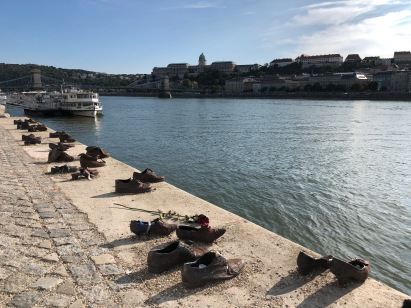 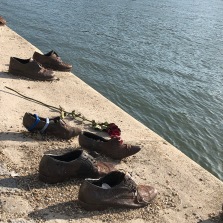 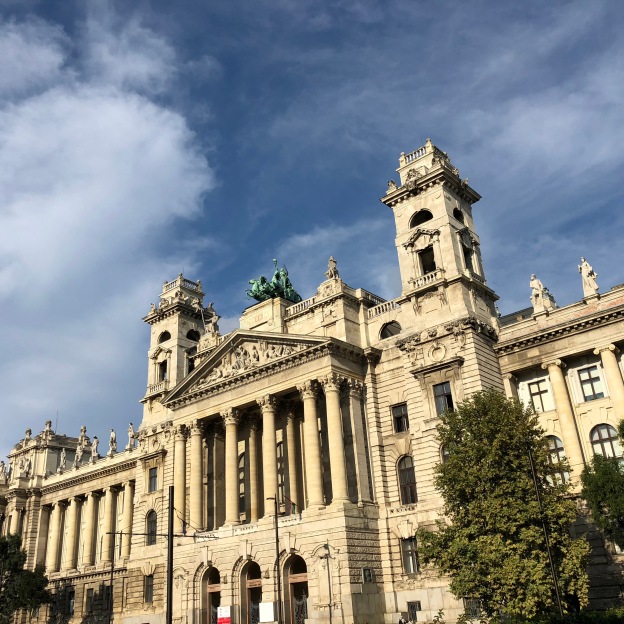 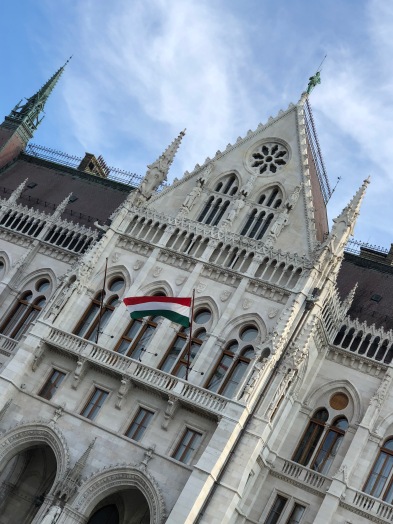 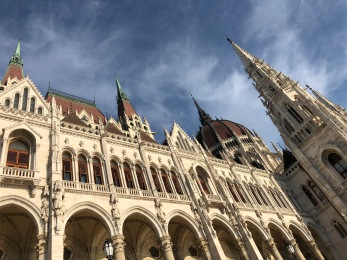 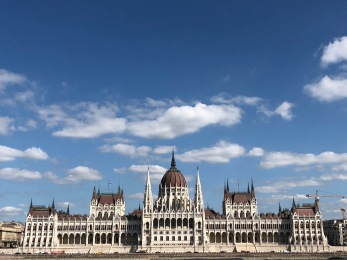 Today was a much brighter day. The incessant rain had stopped and the sun started to peek through once more. We were truly unimpressed, however, in the washing facilities at our ‘campsite’, and the promised boat ride into Budapest wasn’t possible because of the low water levels on the Danube. As a consequence, we changed our plans, and booked into a hotel in Budapest for the night.

First, though, we took ourselves back into the small riverside town of Szentendre. This morning, in the sunshine, it had taken on a completely different feel. The Danube, rather looking like the murky grey of yesterday, did have the slightest touch of blue, although I suspect that Strauss may have been on hallucinogenics when he penned ‘The Blue Danube’.

The hustle and bustle of yesterday’s festival had gone, and instead, walking round in the early morning, before the day-trippers had arrived, it seemed really pleasant. There is obviously a large artist community here, and many of the small shops reflected this. Some artists were even at work, painting various scenes around the town. We had a quick wander and snapped a few photos, with much better light than last night. Then we sat in the central square and enjoyed a coffee, served by a jolly lady who seemed to genuinely enjoy meeting people, unlike our surly waitress last night. It was excellent coffee, too.

We then followed the course of the Danube the few miles into Budapest, Hungary’s capital. A few days ago, we had contemplated giving Budapest a miss, really because the high temperatures were making city visits too exhausting. However, although sunny, the temperature was cooler following the recent storms, so we decided to put it back on our itinerary. We are so pleased that we did – Budapest is really a most splendid city!

As we drove in alongside the Danube, on the Buda side of the city, we both gasped as we spotted the magnificent white Parliament building across on the Pest side of the city. It is truly beautiful, and although apparently inspired by Britain’s Palace of Westminster, certainly dwarfs our Houses of Parliament in both size and good looks. I suspect the stonework must have had recent clean up, because the white stone just gleamed in the sunlight – a sight that I will not forget.

We made our way to the hotel, in the shadow of Castle Hill. We had our usual dose of collywobbles trying to get Oscar parked in the hotel’s underground car park, but once tucked up safe and sound, we heaved a sigh of relief. The size of our hotel room took us by surprise – it is huge, and we whooped with delight at having our own toilet and shower once more – it feels really decadent!

Once settled, we headed off to explore Budapest. The city essentially straddles the Danube, with the western shore being Buda, and the eastern shore being the Pest part of the city. Despite having been occupied by the Nazis during WW2, followed by Russia occupation post war, and then following a brief respite, a brutal re-invasion in 1956, much of Budapest’s splendour from the days of being an important force in the Austro-Hungarian empire, has remained architecturally intact. As such, it is a really beautiful city. Buda is home to the famous Castle and Royal Palace, which dominates the city, sitting aloft on Castle Hill. The Pest side is home to the Parliament and government buildings, and much of the commercial centre. First we walked along the Danube promenade on the Buda side, looking across to the Parliament building, and stopping for a light lunch en route, at one of the many riverside cafes. We then re-traced our steps, and walked across the Szechenyi Chain Suspension Bridge, constructed in 1849, and very much an icon of the city.

As we walked along to the Parliament building on the path by the Danube, we passed by the ‘Shoes on the Danube Bank’ memorial. It is a collection of sixty cast iron sculptures of shoes, period appropriate, in memorial to the 3,500 civilians, many Jews and Romanies, who were shot dead between December 1944 and January 1945 by the extreme Nazi group, the Arrow Cross party, who had control of the city at the time. They apparently rowed the people up, including women and children, ordered them to take their shoes off, and then shot them in cold blood. It was a true horrific act of genecide. The shoes sit on the riverbank, in a higgledy-piggledy fashion, many with small tea-lights or flowers, mostly dead or dried, sat besides them. People stand and contemplate for a while, before walking on.

We walked on to circumnavigate the glorious parliament building. In the large Liberty Square there is another monument, this time a simple water channel installation, in memory of the 1956 Russian invasion. At the far end is a sensor triggered  fountain, that comes on as people approach, and is a monument to anti-fascism. Children seemed to be delighting in running through the soft mist, as the afternoon temperatures rose. Also on this side of the river are the Hungarian State Opera House and Basilica of St. Stephen, the Catholic Cathedral.

We wandered back to our hotel to shower and freshen up, having given the abysmal communal showers at the campsite as miss this morning. As we walked back over the Szechenyi Bridge, a large barge of dancing party-goers was approaching on the Danube, with booming rap music blaring. True to form, Howard gave them a demonstration of his best moves from the bridge above. Much to my total embarrassment, the entire boat load of revellers let out a large cheer in appreciation – he’s such an exhibitionist!!

Batteries re-charged, we headed up the steep Castle Hill, up a series of stone steps, and then, to my dismay, down the other side again, to find our selected venue for supper. I couldn’t moan about the walk, since it had been my choice, and in fact, gave us a wonderful walk through the Caste Hill area, with its cobbled squares and alleyways. I must say, though, my choice was spot on – a charming little bistro, positioned in a square, by a lovely illuminated church. It was virtually full when we arrived, and we were lucky to bag the last free table outside. Not only was the food superb, but we were serenaded for the whole meal by a delightful pair of Hungarian folk musicians on fiddle and guitar, whose acoustic melodies were both contemporary, but with a definite Hungarian twist. I am always a succour for live music, and this just added the cherry to the top of a very enjoyable day.

We have both loved Budapest, and I suspect you could easily spend four or five days here exploring it’s many sights and museums. For us, though, it was just a taster, and maybe somewhere to which we may return someday. It stands out to us a city that takes great pride in it’s appearance, and offers a warm welcome to it’s visitors. Brilliant Budapest!

One thought on “Day 229 Szentendre to Budapest, Hungary.”