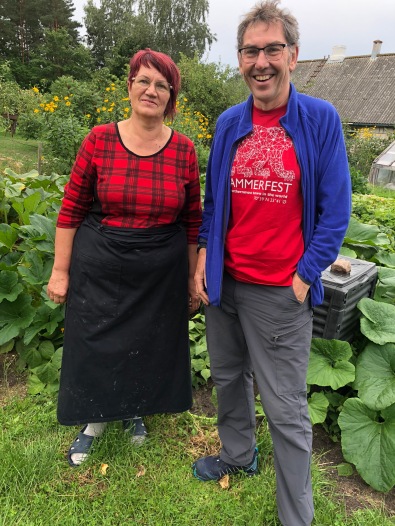 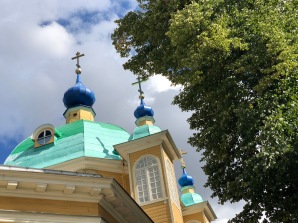 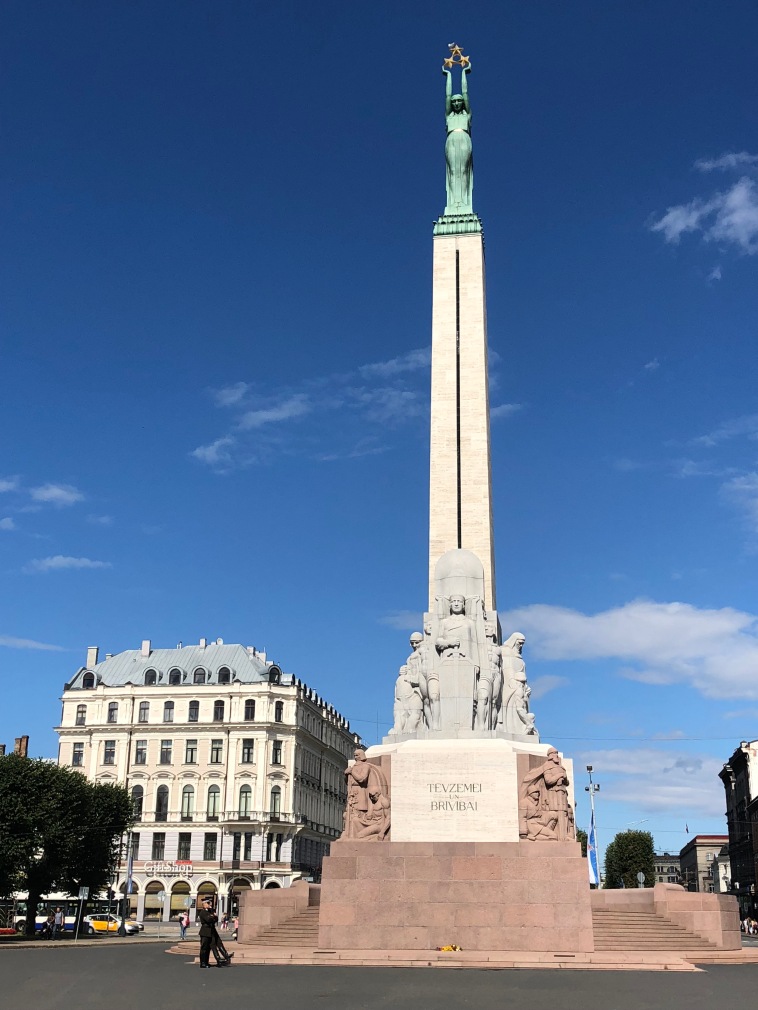 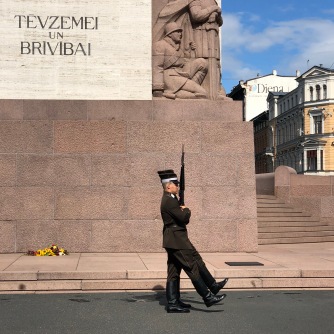 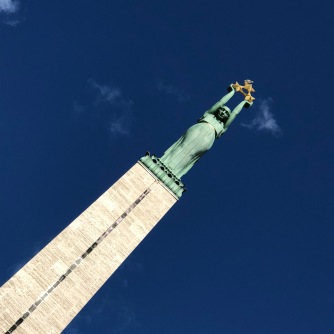 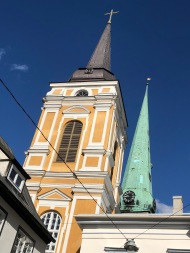 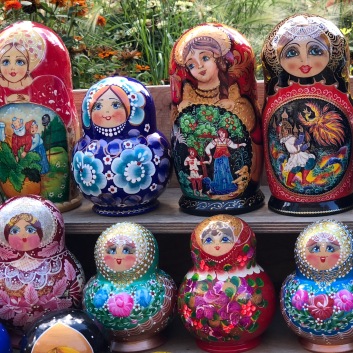 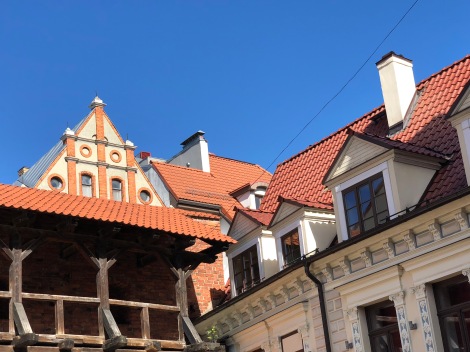 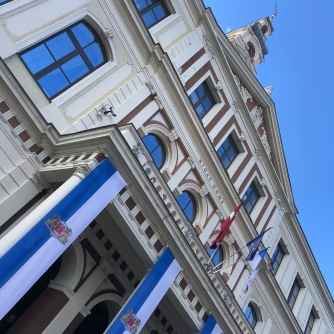 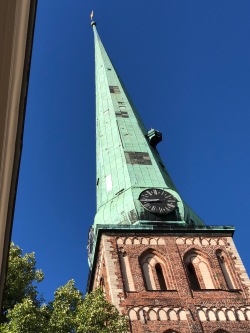 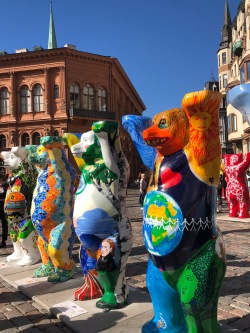 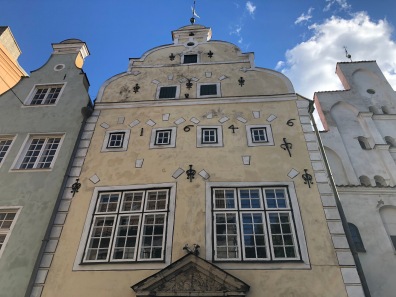 Our night in Parnu turned out to be anything but peaceful. It transpired that our bargain Guest House was a bargain for a reason – it was situated next door to a 11pm – 7am night club. The booming music started at 11pm, and continued until gone eight in the morning. We both slept fitfully, and at seven in the morning, Howard went outside to check on the van. He was expecting hoards of drunken youths to appear from the club, but in fact the music continued until gone 8am. We had started to regret not staying in the awful campsite, but the strong winds and thunderstorms would have made camping tricky.

The outskirts of Parnu were a little shabby. Howard commented that most of the wooden houses could do with a coat of paint – certainly Dulux would do well here. We also saw more evidence of the previous Soviet occupation, with stark utilitarian concrete apartment blocks, in stark contrast to the much prettier wooden buildings.

The only benefit was that we got an early start, and headed southwards towards Latvia. The road south was lined with trees, first pine forests, then a sharp transition to deciduous forests, with birch the predominant species. The land remained incredibly flat and featureless.

Before reaching Latvia, we turned off the main road in search of a coffee. We found a small village called Haadameeste, and followed a sign for a coffee shop. It turned to be a garden shed in someone’s garden, but willing to give anything a try, we walked in. It turned out it was run by a pleasant Russian lady, who as well as coffee, had a profusion of home baking on offer. Howard felt obliged to eat something, so went for her home made apple tart. Later, she showed us her garden, with a profusion of fruit trees and vegetable plot. She seemed genuinely pleased to show us her produce. It is these unexpected encounters that make our trip so interesting. It was the first time, however, that we have had any communication difficulties. Up until now, everyone we have encountered has spoken remarkably good English, which seems to be the universal language for Europe.

After taking a little look around the village at the stone built church and music school, we headed onwards. We crossed over the border into Latvia, and noticed almost immediately that there were fewer trees. In no time at all, we were on the outskirts of Riga, the capital.

Driving into Riga was a bit of a nightmare. The drivers seemed more aggressive than in Estonia, and it was with huge relief that we reached our guest house. Thankfully, we were able to park Oscar behind locked gates, which put our minds at rest, while we set off to explore the city.

Riga is the only real city in Latvia, and over the years, has been under the control of German Knights of the Sword, then the Swedes, and more recently under Soviet Control. It regained it’s independence in 1991, in the ‘Singing Revolution’. Apparently two million Latvians, Lithuanians and Estonians linked arms and sang traditional folk songs to demonstrate their wish to separate from the Soviets. A third of the population of Latvia are Russians, and in Riga, this rises to a half. It has a cosmopolitan feel, and is the largest of the Baltic capitals. Gothic spires and art nouveau architecture dominate. It has a pleasant situation on the Gulf of Riga, with the Daugava River flowing through it. The Old Town, or Vegriga, is the historic heart of the capital. It is surrounded by a picturesque thin ring of parkland, and we entered into Old Riga through Freedom Boulevard, where the copper-topped Freedom Monument sits, guarded by two motionless guards. The UNESCO listed Old Town is a labyrinth of cobbled streets and alleyways, leading to attractive squares. The city is littered with attractive church spires, and a profusion of coffee shops and cafes. St. Peter’s Church, forming the centrepiece of Riga’s skyline, is one of the oldest medieval buildings in the Baltic, and Riga Cathedral, or Doma Laukums, is the largest medieval church in the Baltic, once catholic, but now Lutheran. One of the most impressive buildings in Riga is ‘The Blackhead’s House’. This was once the Guild House for unmarried German merchants. The story goes that one Christmas Eve, following a wild party, the merchants brought a large fir tree into the Guild House and decorated it in flowers, before burning it. This is thought to be the origin of decorating fir trees at Christmas.

Another unusual house is ‘The Cat House’. A begruntled owner fell out with Great Guild opposite his home, after being rejected membership. He retaliated by positioning cats on his roof, with their backsides facing the Guild. The two cats are still there, although today, they face he right way round. In the park, we saw a statue of a couple and their pug dog. It turns out that this is the statue of a man from Yorkshire, George Armitstead, who was Mayor of Riga in 1901 -1912, and is accredited with many of the stunning art nouveau buildings in the capital.

Another unexpected highlight was the exhibition of 140 painted ‘Buddy Bears’ in one of the squares. There was a bear representing every country in the United Nations, and were a centenary gift from Germany, marking a hundred years since Latvia’s first independence in 1918.

We spent a wonderful day exploring this city. We finished off our tour with an Al Fresco supper in one of the open air restaurants, listening to an accordionist busking in the corner of the square.

We are now both exhausted, and ‘citied out’, so plan to spend tomorrow camping in the countryside to draw breath. Latvia has been a revelation – previously unknown to both of us. It has clearly has a difficult past, but now a fully fledged member of the EU, it is looking forward, and seems to be embracing the new Europe. We have enjoyed Riga immensely, and just hope that our sleep tonight is a little more peaceful than last night’s!