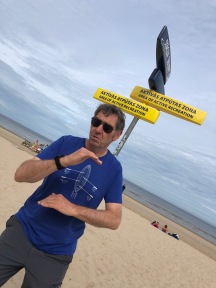 Today we bade farewell to Latvia, but not before visiting one of their premier beach resorts on the Baltic, a town called Jurmala. It is situated about 20 kilometres south of Riga, and is the Baltic’s version of Cannes or St.Tropez. It boasts a ‘Blue flag’ beach, and is a famous haunt of Russian Oligarchs. It’s broad tree-lined streets are rowed up with large elegant Prussian villas, all of slightly different shapes and designs. It is apparently the place to ‘sea’ and be seen, according to Lonely Planet.

We stopped for coffee in a pleasant pedestrianised area, and then took a walk down to the beach. The sandy beach stretched for miles, and was full of holiday-makers enjoying the August sunshine. The area we arrived at had a sign up telling us that this portion of the beach was an ‘Area of Active Recreation’, reserved for active people, rather than those lounging about sun-bathing. Of course, the whole beach was then treated to Howard’s version of ‘Big fish, Little Fish, Cardboard Box’ – some strange dance moves that the boys taught Howard about ten years or more ago, when it was in fashion!!

On our way back to the car, we spotted a stall selling inflatable loungers. As I walked past, Howard rather unkindly took a photo of me, unknowingly stood in front of a ‘Lazy Bag’ sign. His schoolboy humour is starting to wear thin! The item itself, though, was ingenious. It is like a giant stuff sack, that you inflate by running around, allowing air into it. The girl saw us looking, and proceeded to run around on the grass, demonstrating how to inflate one. After that, we couldn’t resist buying one. Within ten minutes of our ‘sun lounger’ purchase, it started teeming with rain!

We headed onwards, towards the Lithuanian border.

We couldn’t help but notice that the driving was getting worse and worse, the further south we drove. Having spend nearly two months pootling around Scandinavia, where everyone stops, and waves you on, we have been taken aback by the aggressiveness of the driving here. Estonia wasn’t too bad, but the Latvians are a nation that has to be in front. Consequently, they tail-gate and overtake at every opportunity, often on blind corners.

At the Lithuanian border, we were stopped by border police for the first time since being in the EU. They politely checked our passports and Howard’s driving licence, and then waved us on. It was then all the fun started. In what seemed just yards from the border, the driving became even more frenetic. To add to the problem, the roads suddenly became diabolical – or as Howard described them, a giant bumpy patchwork. For the next hour, we were constantly overtaken, especially by huge Latvian lorries, completely disregarding the speed limit, until they spotted a speed camera, when they rapidly applied the brakes.

The countryside, as yesterday, was incredibly flat and featureless. Most of the land is set aside for arable farming such as wheat, but further on, we saw fields planted with potatoes, and a smattering of apple orchards. In one field alone, we counted forty storks. They really are the equivalent of the British crow, here in the Lithuanian countryside.

The other thing that struck me was how dramatically the light has changed. Way back in May, when we crossed over into Denmark from Germany, we were immediately struck by the quality of light, and the wide open skies. That amazing quality of light has followed us throughout Iceland and Scandinavia. Now, heading south into mainland Europe, the light is once more dull and flat, almost monochromatic at times. I find it strangely depressing. This afternoon at 4pm, it could have been a late afternoon in October in the UK.

Before reaching our campsite, we stopped off at a Lithuanian town just off the main road, primarily for a comfort break and to pick up a drink. The town was far from attractive, with remnants of old Soviet buildings, and a very shabby utilitarian High Street. We left Oscar in search of a cafe. We saw a sign for a bakery, and spotting some tables and chairs, stepped inside. It was the most peculiar mis-match of a place. At one end was a sort of confectioners shop, as you would have seen in the sixties, with plastic containers of pick n’mix and an odd array of ghastly fluorescent coloured sugary confection. At the other end was a bakery, but with no bread left, it was just selling a bizarre collection of sugary sticky cakes, most of which looked completely inedible. The guy behind the counter was very pleasant though, and duly made us both a coffee. When I asked for the toilet, he directed me into a small cupboard affair, with an miss mash of brooms, cleaning equipment and a small toilet. It wasn’t exactly dirty, but it didn’t enthuse me with confidence, as on the wall was a poster indicating the ‘twelve stages of hand-washing’. I couldn’t be sure if his was meant for the customers, or the owner – hopefully the latter. I suspect that Bill Bryson could have written an entire chapter abut this place, if not an entire book! Although I should add that the coffee was good, and only two euros for us both!

The campsite is situated just a few miles from the border with Kalinograd, a Russian enclave hemmed in between Lithuania and Poland on the Baltic Sea. The nearby River Nemunas was an important logging route into Prussia. We arrived at our campsite in good time, but just as the heaven’s opened, with thunder and torrential rain. It only lasted half an hour, but long enough for us to get completely soaked trying to set up the van. Having cooked an early tea, we are now sat in the van, people watching.

A couple in the corner of the field were virtually ‘making out’ even before they had got their tent up. The German ‘Big Whites’ look organised and orderly, and, as ever, have bagged the best spots. A little orange VW camper has just arrived, and inexplicably has driven up onto chocks just on one side, making it strangely lop-sided. We never use the things (we don’t even possess any), and are always puzzled by the antics of people trying to level their vans. The orange van is parked right by the wash-block, and I know that it’s odd tilt is going to irritate me, just like a crooked picture on a wall.

Perhaps if I have a gin, it won’t seem so crooked? It’s worth a try!

One thought on “Day 216 Riga, Latvia to Siline, Lithuania.”