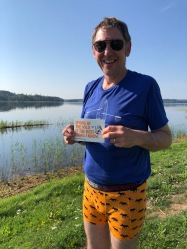 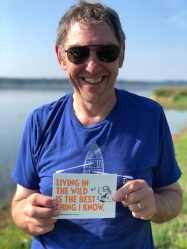 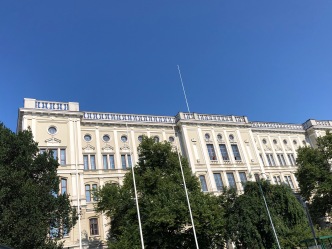 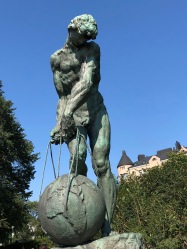 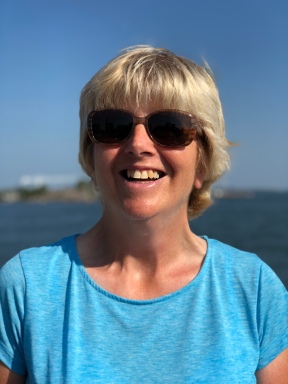 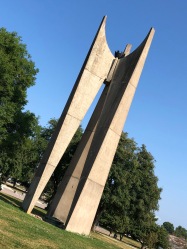 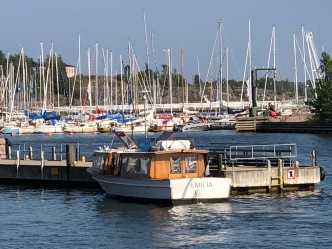 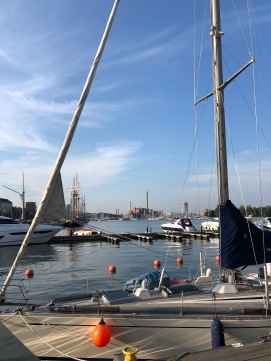 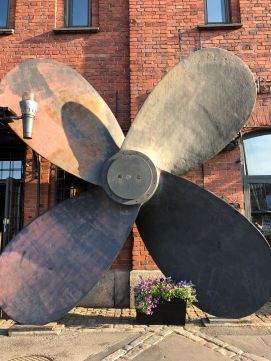 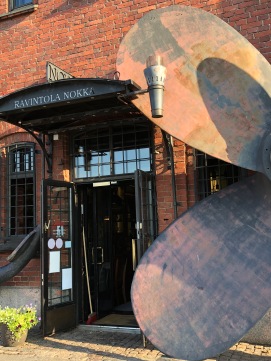 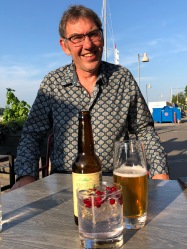 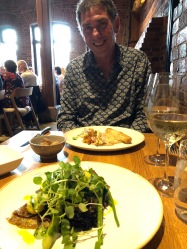 Last night was undoubtedly the hottest night we have spend in the van. The heat was unremitting. Despite having the USB fan going, and all the vents open in the pop-up, it was still unbearably hot. I slept fitfully, and when I awoke at about 4am, I looked through the pop-up window to see the most glorious sunrise over the water. The sky was a vivid shade of pink, and the reflections on the lake were just beautiful. Now, I sorely regret not getting up to take a photograph, but at the time, I couldn’t muster the energy to drag myself out of bed.

I woke early, wished Howard a Happy Birthday, and took myself off to the shower. Already the heat was starting to build. The main shower block for women seemed to be a communal affair, but I found a door through to what I thought was a private shower area. Wrong. After I had started showering, a Finnish lady appeared, de-robed, and took herself through an adjoining door. Then, as I was dressing, she appeared again, and flung herself under a bracingly cold shower, before returning once more to her little room. It turned out, of course, that she was in the sauna.

Saunas are a really big deal in Finland. It is like the national pastime. In many of the towns there are communal saunas. The commonest type involve sitting in a wood-fired hut by a lake, then running out and flinging oneself into the ice cold water, before returning to the sauna, and flagellating oneself with birch branches, thought to stimulate the circulation. Fortunately there were no birch branches involved in this mornings ritual, but certainly by the second ice cold shower, I felt that this poor lady was going above and beyond!!

When I returned to Oscar, Howard had taken himself off for his morning run. When he returned, he showered, and half an hour later, he was still dripping with sweat. It was so hot!

We breakfasted in the thinnest strip of shade by the van, still unable to use the awning. Our Finnish neighbour watched with interest. I gave Howard his birthday card, and present. I say present, but really it was just a token. Howard had insisted that we didn’t have any room in the van for anymore stuff. So his present was a pair of ‘Scandinavian Explorer’ moose underpants. For weeks we have been driving through ‘moose warning’ road signs, probably for nearly two thousand kilometres, yet have failed to see an actual moose. So I thought I would give him the next best thing.

Howard appeared thrilled with his present, so much so, that after posing for a photograph, proceeded to try them on over his other underpants. The Finnish neighbours, by now, thought he was bonkers!

We packed up, and headed back into town, on the off chance that the hairdresser had returned. We were in luck. She was open, with a sign outside saying ‘Drop In’. In truth, any hairdresser that you can just walk into, is probably a bit dodgy, but by now, I was getting desperate. So Howard went off to get a coffee, leaving me in the hands of the hairdresser. She seemed really nice, spoke fluent English, as well as Swedish and Finnish, and we were getting on like a house on fire. I explained that I needed a trim, and also wanted my roots done. No problem, she said.

All was going seemingly well until the hair washing bit. She placed me in a chair, elevated the legs, and then turned on a switch. It turned out to be a sort of massage chair. A balloon thing started vibrating and inflating in the arch of my back. Then, very abruptly (I’m guessing it was a rather cheap massage chair), it made a strange clanking sound, and deflated. The result was that it jerked me backwards into the base of the chair, so suddenly, that I let out a little shriek. Then the whole procedure started over again. I was starting to get a fit of the giggles, when my hairdresser said to me, ‘I have just put some silver shampoo on your hair. Do you know what that is?’ I answered ‘No’. So she went on to explain. ‘Silver shampoo is used to combat the yellow colour that hair goes in the sun’. So far, so good – my hair had definitely being going very straw coloured in the sun. But then she continued, ‘ It can make your hair look purple, until you wash it a few times’. Internally, I let out a primordial scream! Aagghhh! Purple hair!!!

Thankfully, my hair isn’t purple – still a very blonde colour, from months of living outdoors. Howard seemed to think that it didn’t look too bad, and at least it’s not flopping over my eyes, like before.

So haircut done, we headed on to Helsinki. Tonight we are staying in a hotel, since we need to get to the garage early in the morning. The hotel garage has a height limit of 1.90 metres. Oscar is about 1.85 metres. Howard slowly inched his way down into the underground car park. From outside, I shouted to him, ‘Remember the garage door shuts automatically after 90 seconds’. Too late. As I spoke, the door slammed shut, just as Howard reached the bottom of the slope! Fortunately, we were saved by a lady inside the garage, who saw our dilemma, and managed to open the door from the inside. That was a close call!

Helsinki is hot. The lady on reception suggested we head for the waterfront, in the hope of finding a breeze. So we sat by the water, had a drink, and watched what seemed to be the rest of the population of Helsinki enjoying a day on the beach. So many people were in the water swimming, it was easy to forget that we were in a capital city, not a holiday resort.

We had a walk along the waterfront, then returned to our hotel. For supper, I had booked a lovely restaurant, by far the nicest place we have eaten all trip, and certainly the first time I have worn a dress in seven months. It was funny to think that this time last year, we had been climbing Schiehallion in the teaming rain with all the boys and their partners, on Howard’s 60th. Little did we know, that a year later, we would spending his birthday in Helsinki.

It has been a lovely day, if a little hot, and certainly a birthday to remember. I do suspect though, that the Finns on our campsite from last night are still puzzled about the mad Englishman sporting bright orange moose underpants!