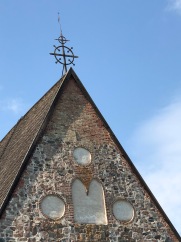 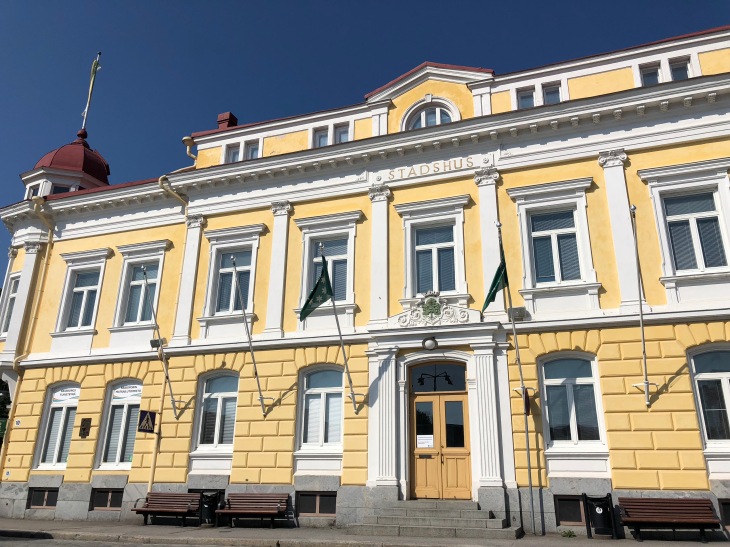 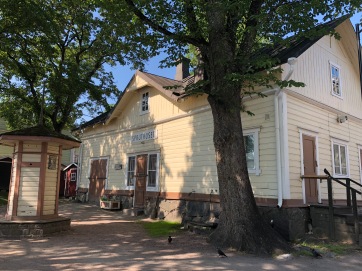 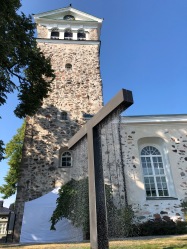 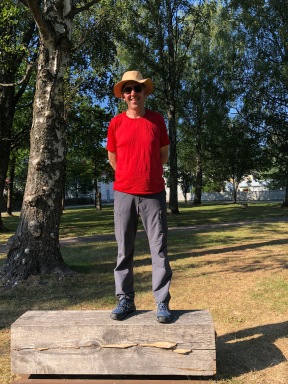 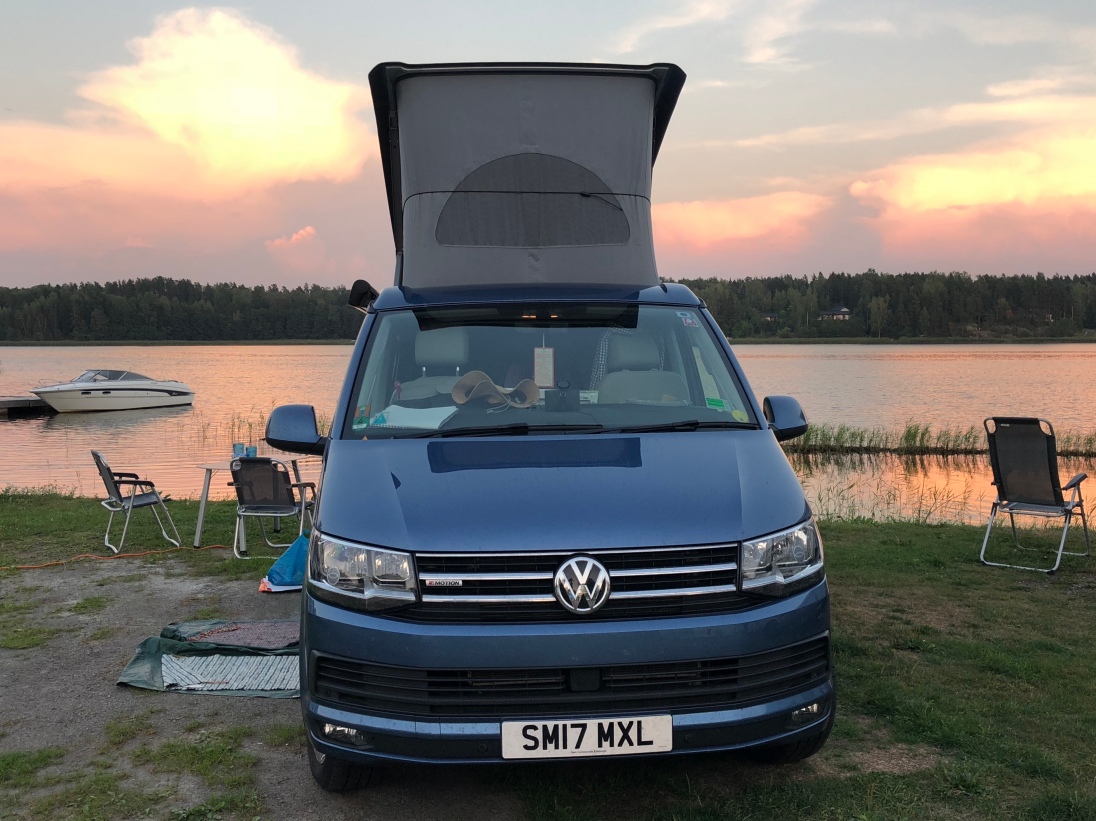 Today has been an absolute swelter! By the time we awoke, the heat was already oppressive and muggy. Had it been cooler, we may have explored the city of Turku further, but frankly, it was too hot to walk around cities. We did give it a fly past in the van, which I know is rather short-shifting Turku, which has the reputation of being a lively university city, known for it’s experimental art and vibrant festivals, but in the heat, that was the most enthusiasm we could muster. On first glances, it lacks the stunning kerb appeal of some of the Scandinavian cities we have visited so far. There appeared to be lots of concrete, and a mixture of modern buildings. However, there was a pleasant river running through the centre, with riverside walks, and some attempt to soften it’s edges with pretty floral displays. We immediately had the sense that we were no longer in Scandinavian – as indeed, we are not! The Finns take offence at being called Scandinavian, which refers to Sweden, Norway, Denmark and Iceland. Finland is a Nordic country, and in many respects has more in common with Russia, than it’s other neighbours. In historical terms, Russia and Sweden have vied for control of Finland. In World War II, it began by being invaded by Russia,    and fighting a bitter ‘Winter War’ with them, asking the Germans for assistance. Forced to concede defeat, they then renaged on the peace treaty they signed with the Russians, and changed their allegiance to the Allied Forces. A war was then waged in Lapland, to oust the Nazis, who had occupied this strategic region. Throughout the war, Finland sought to remain independent, at tremendous cost to themselves, and when the Germans did eventually withdraw, they adopted a ‘scorched earth’ policy. Today, Finland is a member of the EU, joining in 1995, and it adopted the euro in 2002 – the only country in this region to have done so.

We noticed a huge difference in the language moving to Finland. Many of the words sounded Russian, and the names changed from Hans and Lars, to Svetlana and Katya. We also noticed a difference in some of the churches – passing through one town with a very distinctive domed church.

Initially the countryside looked entirely different too. Driving out of Turku inland, it became much more agricultural than we have seen for months, with fields of wheat and barley, some just starting to be harvested. Then, as we approached the coast once more, the familiar pine forests and moose road signs re-appeared. The ground also changed, with many more rocky outcrops with thinner topsoil.

We arrived at our campsite in the early afternoon, and managed to bag a stunning pitch by the lakeside. The added advantage of this spot, is that there is a slight breeze coming off the water, which gave considerable relief from the sun. We toyed with hiring a rowing boat, but you needed to take it for 24 hours, and it wasn’t cheap. Most people here use the boats for fishing, which is an incredibly popular pastime.

So instead, we took a walk into town. In truth, I had a bit of a mission – I was looking for a hairdressers to get my hair cut. The town of Raseborg is just a short distance from the campsite, and what a gem it turned out to be. We were immediately walking through pretty streets of coloured clapboard houses, and gorgeous little parks, with footpaths leading to the main pedestrianised part of the town. We sought out the three hairdressers that the campsite had recommended, but they were all closed. I’m guessing that in the hot weather, they had all decided to close up early. One had left a note on the door, but when we asked a local what it said, they apologised and said they didn’t understand it, it was in Swedish. Apparently 65% of people ion this area speak Swedish, we are told. So we gave up on the hair cut – and I am left looking like an Afghan Hound with bleached blonde hair – not a good look. Instead, we sought out a cafe, where Howard had a black coffee, and I cooled off with an ice-cream. So I’m now resembling a podgy Afghan Hound!

Back at the campsite, the inevitable has happened – a huge Big White has sidled up to us. Fortunately we had parked with our door away from them, since the whole beer gut / bare chested look is not doing it for me!

Howard has just done a trawl with the zappy bat, and it’s pinging like mad! So it’s on with the insect repellent, and out with the citronella candle and deterrent lamp thing. This could be a long night!!

Tomorrow is Howard’s birthday, and we are heading to Helsinki. I struggled to find him a birthday card in the shops, so I’m not quite sure what the card actually says on it – but I think he’ll be none the wiser. At least, that is, until he uses his Google translate on it!