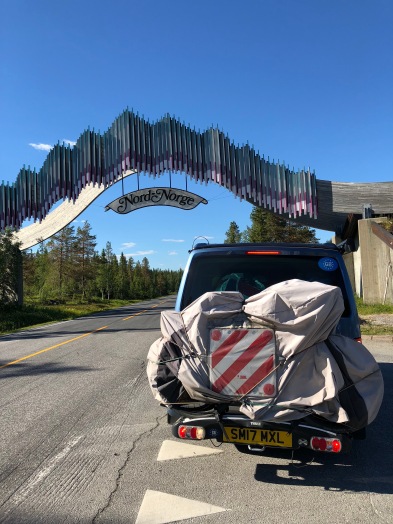 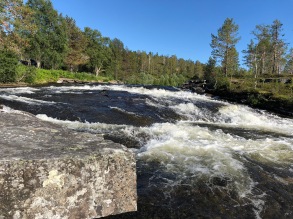 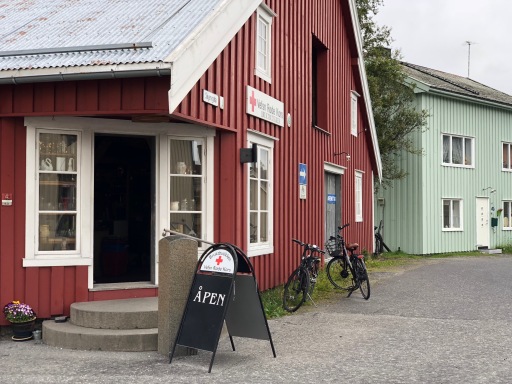 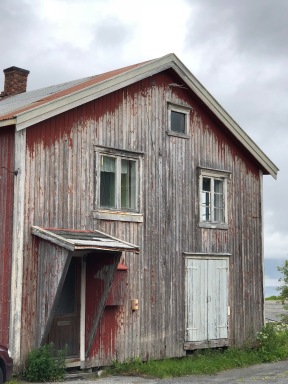 Oscar got through his service with no problems, but it meant that it was a late start leaving Trondheim.

We eventually left mid-afternoon, having negotiated a first for us – a roundabout in the middle of a tunnel on the Trondheim ring road – a little surprising!

We headed north on the aptly named Arctic Highway, the main road that winds it’s way northwards to Narvik and the Arctic Circle. Many peel off after an hour tor so to the coastal route, but because we had lost so much time in Trondheim, we opted to stick to the faster interior route initially. I must say, the scenery was utterly stunning, firstly driving alongside fjords, the further north, mountains and endless pine forests. The road follows the roaring Vetsna River for many miles, with periodic waterfalls and glorious vistas. Due to pressure of time, we rarely stopped, conscious that we needed to crack on if we were going to reach our campsite for the night.

It was after seven by the time we pulled in to our lovely campsite by the river. There were already plenty of other vans pitched up for the night, but we managed to bag the last spot left by the water’s edge. It was a glorious evening, and everyone sat outside eating their suppers and having a drink. Belgium were playing Japan in the World Cup, and when Japan went two up, the Japanese two along from us in a Big White let out shrieks and whoops – very uncharacteristic for the usually very quiet and reserved Japanese. Sadly though, silence fell as Belgium put in the next three goals to eliminate Japan from the Wold Cup. This is the first time we have camped with Japanese. The vast majority, by a mile, have been Germans, maybe more than 90% of the travellers we have encountered on our trip, so far. They are avid campers, are always really well organised – they are invariably the first off their pitch in the morning, often leaving as Howard and I are still stirring. Their strategy seems to be to rise early, wash, breakfast and pack away, and then travel on to their next spot arriving early afternoon. As a consequence, when Howard and I potter up early evening, all the best pitches have usually been taken. The German family pitched on the other side to us last night decided to try their luck at fishing in the river. Father and son donned waterproofs up to their waists, and waded into the water. The Dad was trying to teach the son to fly fish, although I’m not sure his technique was up to much, judging from the fly fisherman I have observed in Scotland. They stood out in the water for a couple of hours, but nothing was caught, and when they waded back onto the bank, their faces matched those of the poor Japanese family.

This morning, despite our very best efforts, we were still almost last man standing at the campsite, but we did at least pip the Japanese, but only just.

We headed first to the lovely little town of Mosjoen, which proved an absolute gem. Despite an ugly aluminium producing plant to it’s north, the old town itself sits on the shore of Vefsnfjorden, with a steep mountain the short distance across the fjord forming a stunning backdrop. Most of the old part of the town is a street which runs along the fjord-side, consisting of old weatherboarded houses and former warehouses, with over a hundred of the buildings having a listed status. Many of the buildings are occupied by artists and craftsmen, and there are several cafes and restaurants too. Unfortunately, the gorgeous sunshine of yesterday had left us, and a light drizzle hung in the air, but despite this, the town looked quite charming.

We stopped for coffee in a cafe recommended in my trusty Lonely Planet, which was heaving with locals, and had the nursery school children sitting in their garden, all dressed in matching fluorescent jackets. The coffee was exceedingly good. Before leaving the town, we had a quick walk around. I wondered into a gallery of paintings and glasswork, and we got talking to the lovely artist who ran it. She specialised in fused glass works, and some of her pieces were stunning. Somehow, she had taken casts of people’s faces, and reproduced then in coloured glass. It sounds odd, but it was amazingly original and very eye-catching. We ended up buying a very small glass heart, described as a ‘Heart of Joy’ – rather apt, I thought. The artist also told us about the festival they were holding this coming weekend, when everyone’s studios down the street would be open, making it the ‘longest gallery’ in Norway. It brought to mind the Pittenweem Festival in Fife, a similar idea. They were hanging bunting out in preparation, made from lampshades, handbags and flowers – very novel!

Heading off, we opted to veer off the main road north, and join the hugely publicised coastal route, the Kystriksveien, which follows route 17 up to Bodo. It is muted as one of the most spectacular drives in the world, the scenery being stupendous. Well, on a better day, maybe it would be! But as we continued to drive, the weather slowly closed in, making me a very frustrated photographer. This route twists and turns along the coast, and necessitates several ferry crossings, making it fairly slow going. On the second ferry of the day, we crossed over into the Arctic Circle. Howard and I rushed out on deck – appropriately it was cold and wet, and we just managed to spy the metal sculpture onshore signifying our transition into the Arctic.

This is the second time on this trip that we have experienced the Arctic, the first being in Iceland. In the next week or two, we plan to travel even further north, through the Lofotens and, all being well, onto Nordcapp. Sadly the weather forecast for the next week isn’t brilliant – and today I was forced out of my shorts and sandals, and back into warm weather gear. So no more ‘al fresco’ dining for a while. At least though we can call Oscar an ‘Arctic Explorer’!!