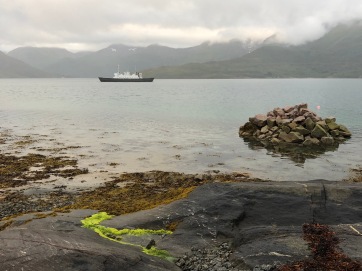 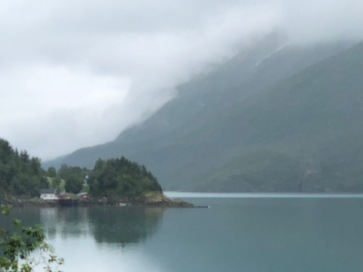 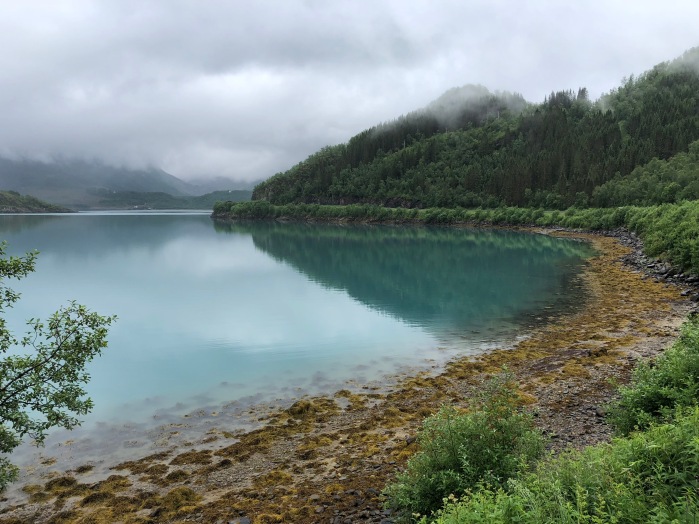 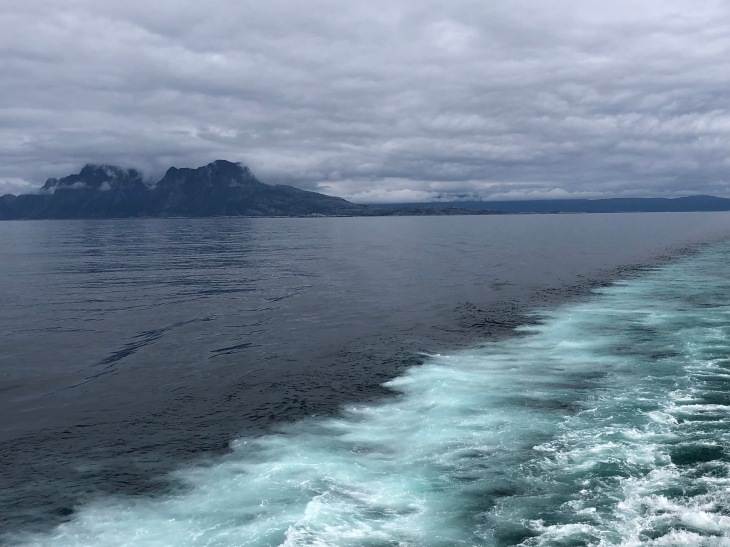 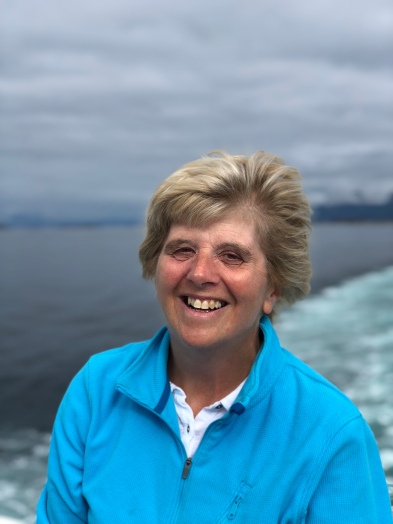 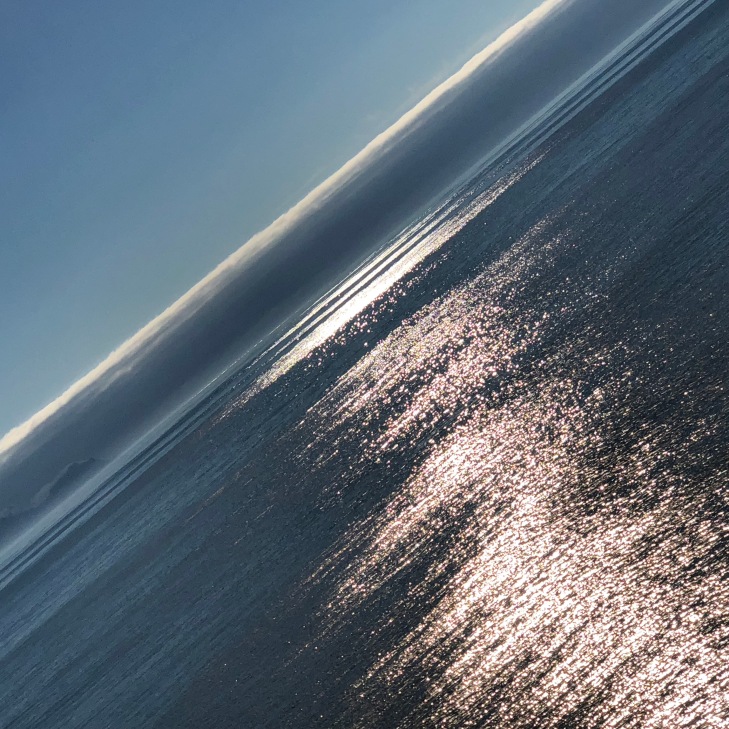 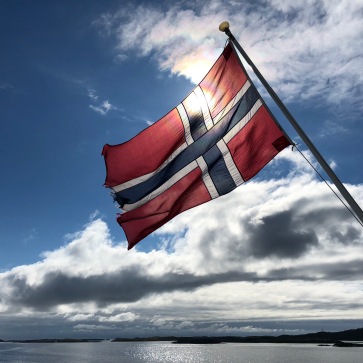 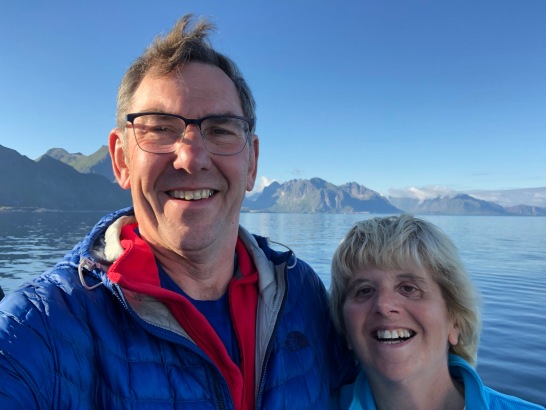 We had an early start this morning, in order that we could complete the last leg of the Kystriksvein coastal route up to Bodo. Our campsite last night in Furoy was adjacent to the ferry port where we had landed on our last ferry of the day. Although still drizzling when we arrived, it was still a beautiful spot looking out over the fjord. Rather foolishly, we went with Kirsty Allsop’s mantra, ‘Location, Location, Location’. I did point out to Howard when we parked up that the ground looked a little bumpy, but he said no matter, the view is superb. In any case, it had been a long drive, and neither of us fancied moving around the site looking for something better.

As ever, the 4G signal was pants, and the campsite WiFi only worked if you sat in a covered patio by reception. So in order to attempt to download my photos, I sat heroically in the rain under the cover trying to get enough signal to get my photos from my phone to the computer. Whilst I did this, Howard sat and listened to the England match in the World Cup. Eventually I succeeded, but not before I had received about thirty midge bites to my face and scalp.

We retreated to Oscar just as England miraculously managed to win the penalty shoot out, unheard of in my lifetime, I think. As we climbed into bed ‘upstairs’, I noticed an unusual tilt to the bed. Not only was I leaning bow down, I also had an alarming tilt to port, propelling me straight into Howard. I turned on my side to try to wedge myself still, and tried to go to sleep. Half an hour later, a group of Dutch people in the camper van next to us returned from who know’s where (we were effectively in the middle of nowhere, and it was close to midnight, although still light), and proceeded to bump and slam and chatter for at least three quarters of an hour. I eventually nodded off, to awake only an hour later, with raging backache, and completely over Howard’s side of the bed. In the end, I had to use my pillow to wedge under one half of me, so that I was level, and at long last went to sleep. The moral of the story is, don’t park your van on a slope, just so you can see the fjord!

This morning was damp and overcast as we drove the beautiful route up towards Bodo. We passed the Svartisen Glacier, which emerged from the mist on the other side of Holandsfjord. It is Norway’s largest glacier, encompassing 400 square kilometres. At the point we spied it, it plunges 1,200 metres down the mountainside, almost touching the fjord, and moves at a rate of 2 metres per day. Apart from stopping for petrol and picking up some bread and eggs, we didn’t stop off en route – the weather was against us, but from the warmth of the van, the scenery looked amazing. At one peninsula, we saw the Hurtigruten steaming past. When we eventually arrived in Bodo just after lunchtime, we had managed to beat it into dock by a couple of minutes. Go Oscar!

We headed straight to the ferry terminal, and plonked ourselves in the line for vehicles without a reservation. 40% of paces can be booked ahead, but they had all been sold out the few days ago when we looked online, so we endeavoured to get to the ferry in good time to secure a place. So as I type, we are sitting in the ferry queue. The good news is that the ticket person has just been down the line, and we have purchased our ticket, and she assures us that we will get on the next ferry. Lucky, because the next one is nearly five hours later, and doesn’t land until 2am.

So hopefully, the next time I post a blog, I will be in the Lofotens. My expectation of 4G or campsite WiFi however is not high, so if I go silent for a few days, it will not be through lack of trying.

We are both very excited about this next stage in our adventure. The Lofotens have been on my ‘must do’ list for decades, so here’s hoping they live up to all the hype. The sun has just peeped through the cloud – so I’m taking that as a good omen of things to come. Lofotens here we come!