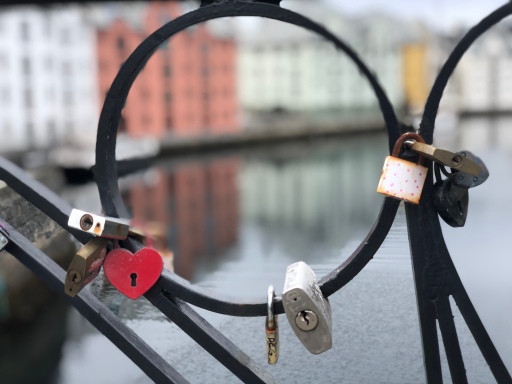 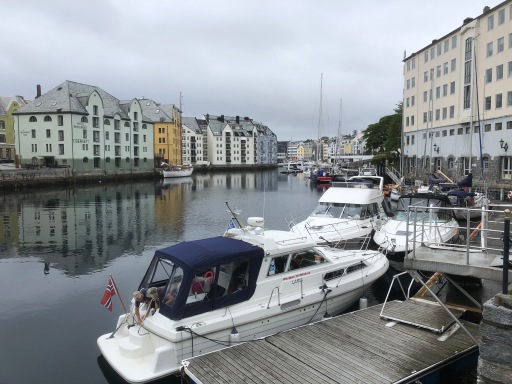 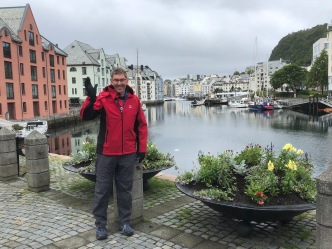 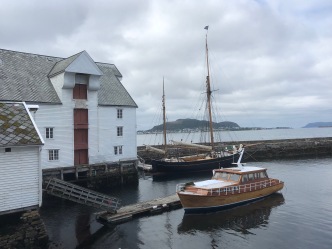 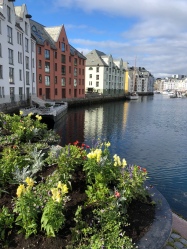 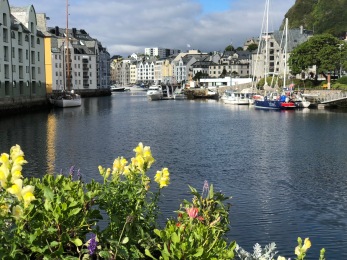 The view from our campsite in Aldalsnes was amazing – looking across the river to the soaring mountains. Last night in the sunshine it looked incredible – this morning in the rain, it was still impressive, but lacking the same appeal as last night.

We dId have some excitement though (warning – entomphiles look away now) – we got to christen our new insect bat effectively for the first time. Previously we had just swung it around aimlessly. An annoying little fly appeared as we were eating breakfast. We reached for the bat, and zap! The bat lets out a very satisfying sizzling noise, associated with a flash, as the bat hits the fly and falls too the ground. Macabre, but very pleasing. Howard looked as if he had just won an important sporting contest, he was so chuffed!

We set off, and decided on stopping in the town of Aldalsnes for coffee, since we had only seen the outskirts. There’s not a lot to say abut it really, except that it’s clearly into mountain climbing. There were several outdoor shops selling all manner of climbing equipment. It also lays claim to the tallest indoor climbing wall in Europe, housed in the visitor centre. We had our coffee, and left.

Before heading onwards, we needed to make some phone calls. Oscar will be due a service in the next week, and we were struggling to find a Commercial VW dealer. We googled one in Trondheim, and tried to call. We were defeated by a Norwegian message, probably telling us to select options, which we were unable to understand. We phoned our garage in Edinburgh – they were unable to help either.  In desperation, I googled again on my phone and pressed the ‘call’ option. When a remote voice spoke, I just pressed one, then one again. Eventually we got through to a real person! But then she had to put us through to the service department. Walter only spoke very limited English. He asked if we spoke German – no! So after a very stilted conversation, I think we have managed to book Oscar in for his service at the beginning of next week – we will see.

We then headed westwards, back towards the coast, to a town called Alesund. The Lonely Planet describes Alesund as a town unlike any other in Norway. It was largely destroyed by a fire in 1904, and was re-built in the Art Nouveau style, so has little of the typical clapboard houses of other old cities. It sits on a peninsular, surrounded on three sides by water, and is home to the Norwegian Cod fleet. In recent years, it has also become a popular stopping off point for cruise ships, as well as the Hurtigruten.

The entire journey here, it rained. The scenery, I suspect, on a day like yesterday, would be sublime. However, today, we could barely see the mountains through the mist.

As we drove into Alesund, however, the rain stopped, and slowly over the afternoon, the weather brightened.

We parked up Oscar, and took a walk around. It is a pleasant town, with a pretty waterfront, and many art Nouveau buildings extending up the hillsides from the water. There were three large cruise ships in dock, but one by one, their huge klaxons bellowed out, beckoning their passengers back onboard, and they slowly made their way out of the harbour. As we walked around, we stumbled across a stone table tennis table, outside the Arts Museum. Besides it were two bats and a container with balls inside. Being a former Youth Club table tennis champion (!!), it was something we could not resist!

Jackets off, we started to play. I must say, that in our youth, I could always beat Howard easily. So I was a little disturbed to find that Howard narrowly beat me in the first game. ‘Right – best of three, I announced’. Second game – Howard once more narrowly beat me. ‘Best of five!’ I exclaimed. Third game – he beat me again. ‘Best of seven?’ I pleaded. ‘No – winner decided on next game’, Howard appealed.

Game on. Off came my sweat shirt. I meant business. We were within a point all through the match, but eventually, I pipped him to it. Hoorah!!! The victor!! Well, in truth, I suspect that Howard may have conceded the match, but whatever – I was happy.

We then wandered off to the old part of town, passing by the Fisheries Museum, and some lovely wooden houses.

As we returned back past the Table tennis table half an hour or so later, an Indian family who had watched us playing, had now taken up the batten. Father and son were having a match. What a lovely idea, to have a publicly available Table Tennis table in the middle of a city. Very sociable, and a credit to the local population that no-one had stolen the bats or balls. Alesund gets our vote!