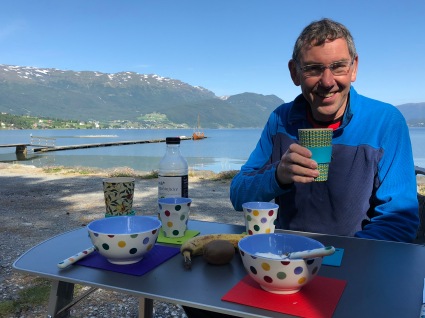 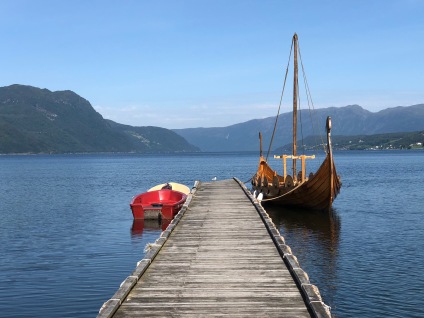 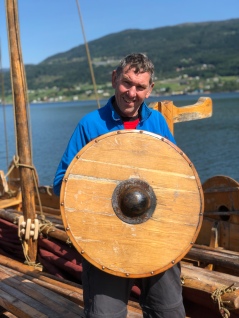 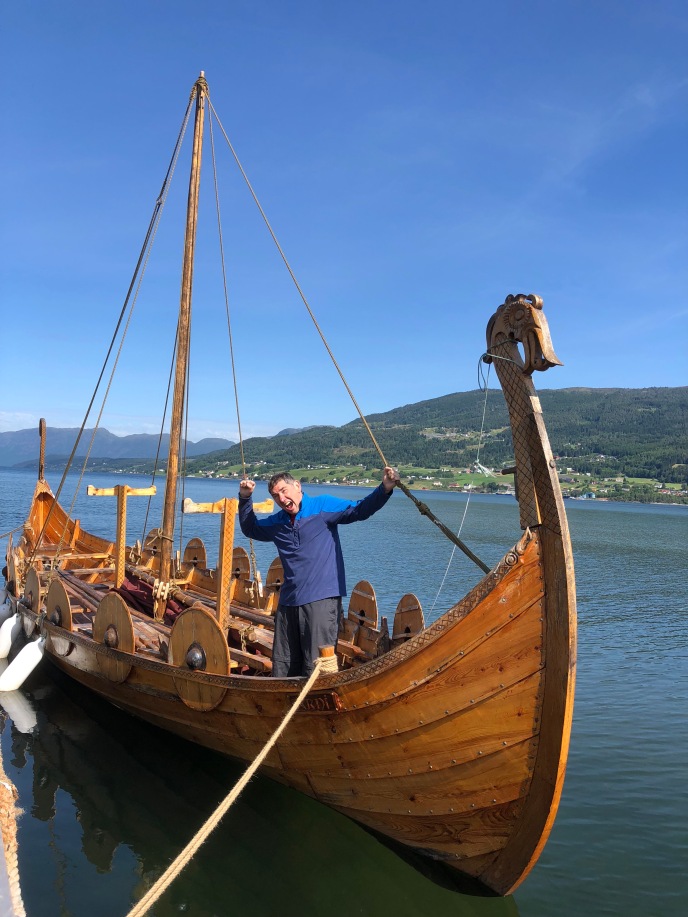 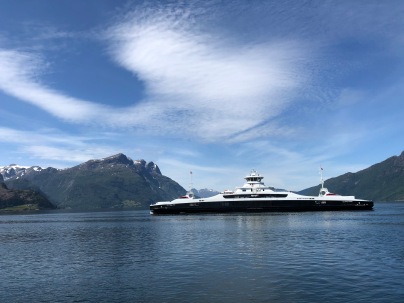 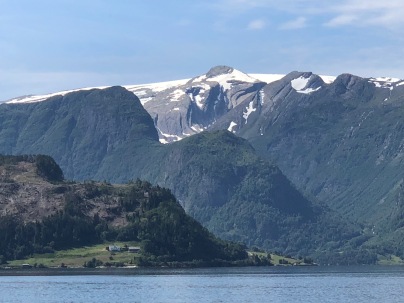 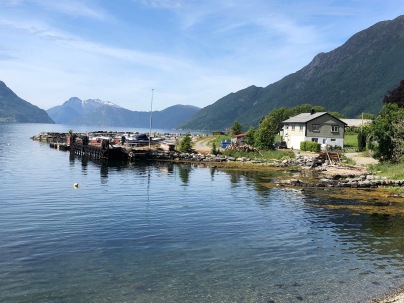 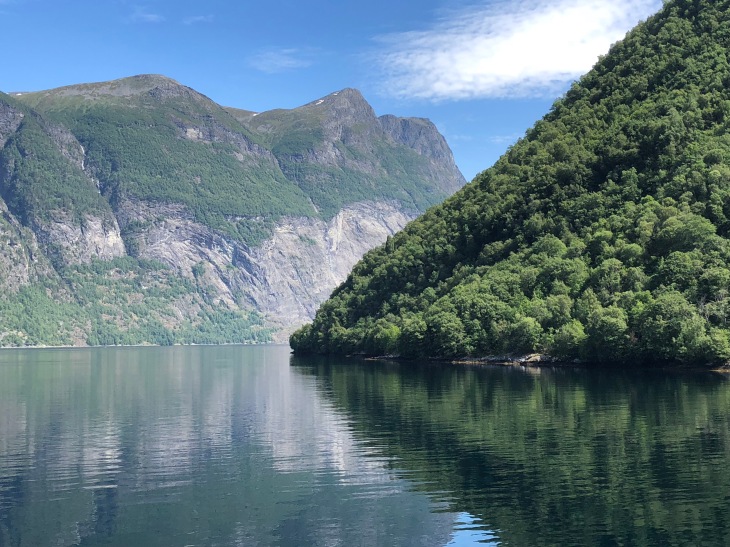 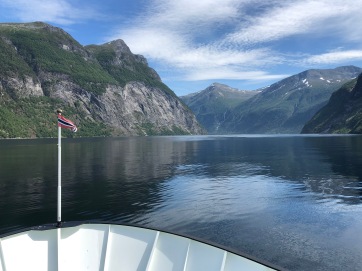 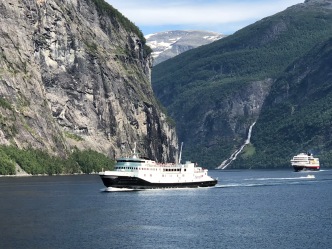 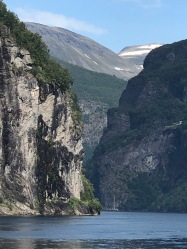 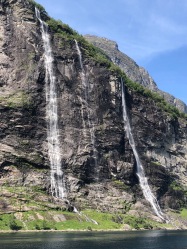 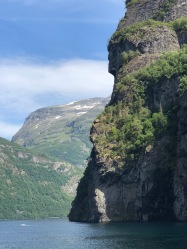 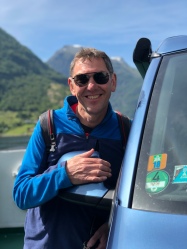 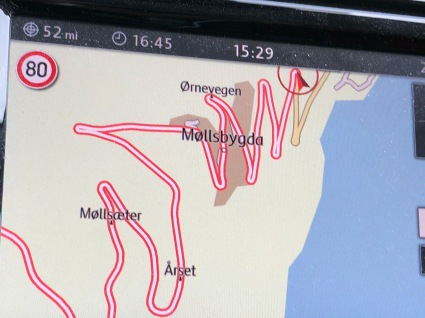 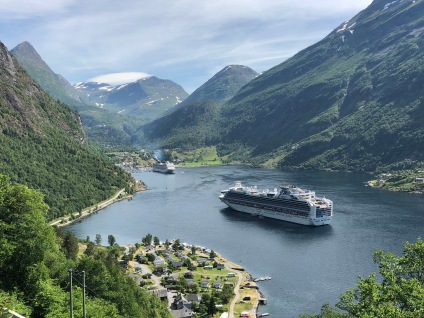 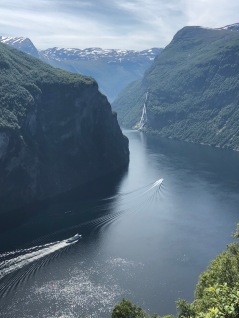 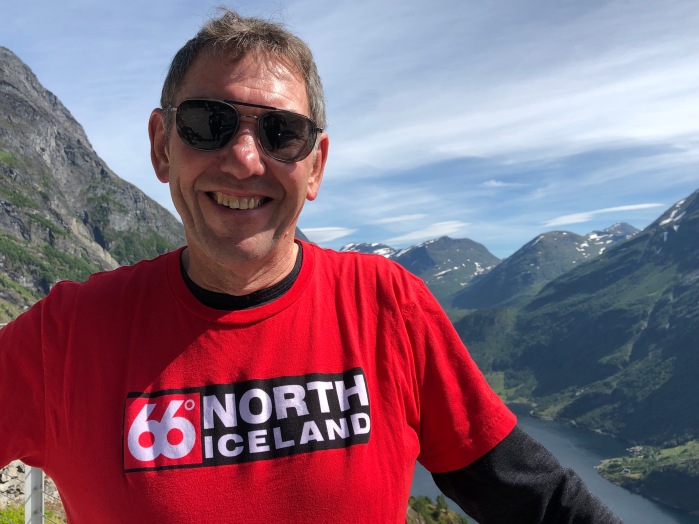 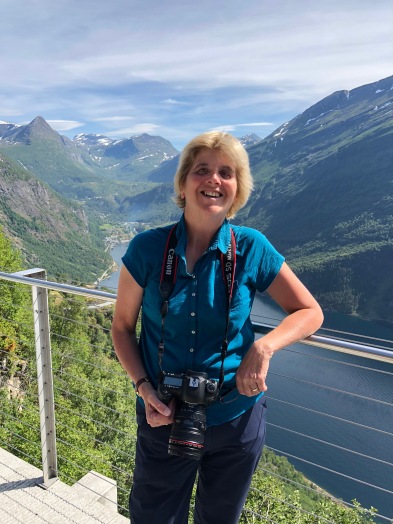 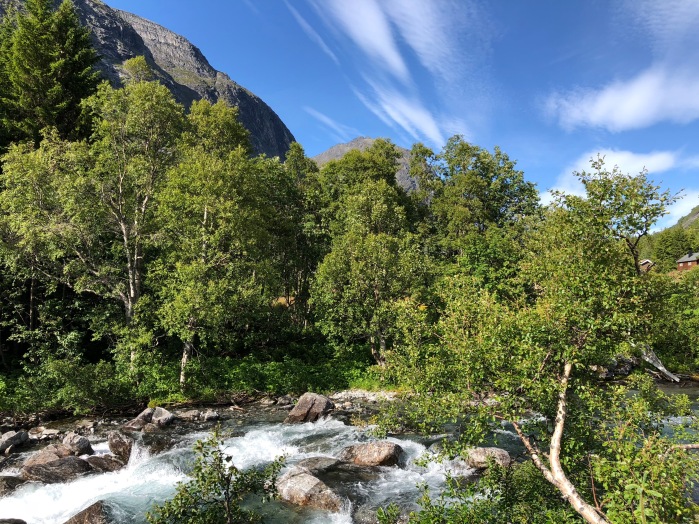 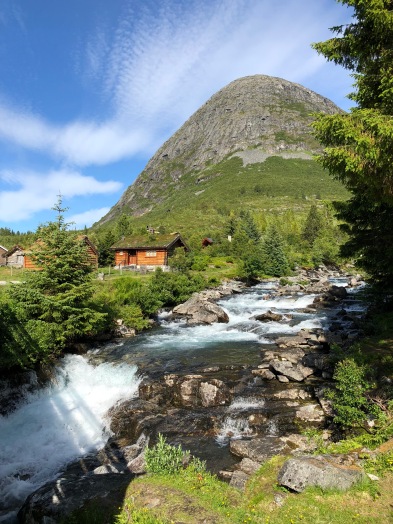 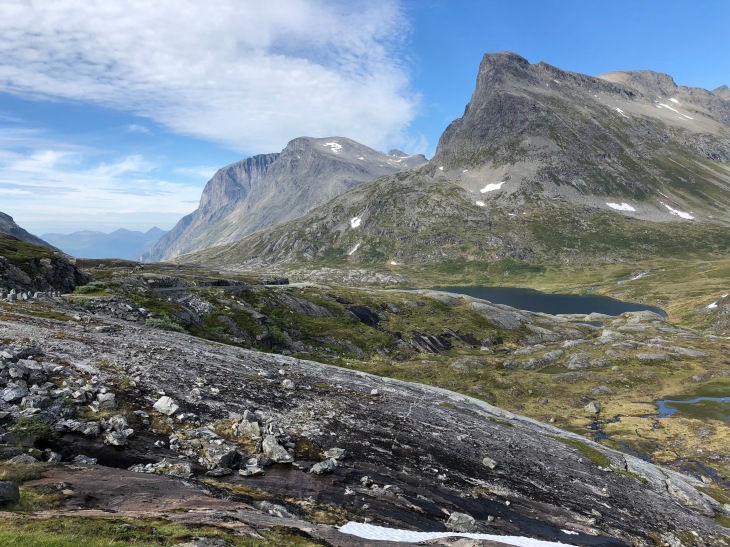 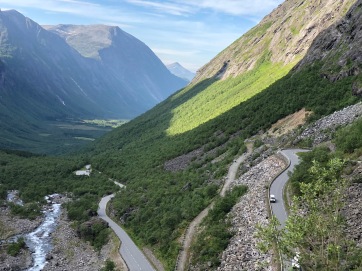 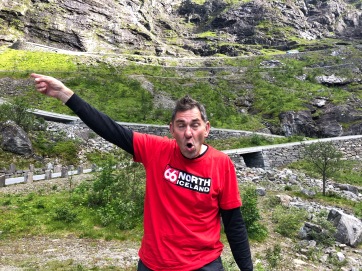 Today has been another cracking day. It was a still morning on Gloppenfjorden, and the fjord looked just beautiful. We sat eating our breakfast looking out at the Viking ship, and before we left, Howard couldn’t resist playing Vikings aboard! Such a kid!

Our tentative plan for today had been to head for Geirangerfjord, billed as one of the most stunning of all the fjords, and to maybe stay at the campsite there. We were keen to do the boat trip between Geiranger and Hellesylt.

Before leaving Sandane, we stopped for some groceries, and decided on a coffee sitting outside in the sunshine. I watched an elderly couple eyeing up Oscar – they walked around him, then looked inside. They then crossed over the road towards us. ‘Is that yours?’, they enquired. We confirmed it was, and the old lady’s face lit up – ‘Another Brit’, she exclaimed. It turned out she had been born in Putney, but had married a Norwegian, and yesterday they celebrated their 64th wedding anniversary. She talked fondly of the UK, but it became clear to Howard and myself that she had some degree of dementia, often repeating things. Her dear husband sat patiently, quietly correcting her, and the two seemed totally devoted. Our conversation meant we were late starting our journey this morning, but clearly she had enjoyed meeting us.

We set the satnav, and it gave us two options on the route. For no particular reason, we picked the most northerly route. We hadn’t paid that much attention, because I suddenly realised from the map, that this route necessitated a ferry crossing. When I looked closer, it was the same crossing that we had wanted to do on a boat trip – so win, win. I quickly checked the ferry schedule to see the time of the next crossing – it was in twenty minutes. I looked at our satnav – we were about twenty two minutes away, with no reservation – bugger! Undeterred, we continued, thinking we would stop for a drink and sandwich in Hellesylt whilst we waited for the next ferry.

To our surprise, as we pulled in to Hellesylt, the ferry was still in the dock, loading. It should have left five minutes earlier. We drove Oscar up into the line of cars, with little expectation that we would get onboard. But to our delight, they managed to squeeze us in, right at the back, after manoeuvring a couple of cars to the side. We couldn’t believe our luck!

The ferry trip was sublime. The sun shone, and the scenery took your breath away. As we entered Geirangerfjorden, we passed the Hurtigruten sailing in the opposite direction, full of passengers up on deck. In contrast, our little ferry just had a smattering of car drivers, by far the best way to see this beautiful fjord, we thought.

As we approached our destination, the tiny village of Geiranger came into view, as well as two great big cruise ships moored up alongside. We also glimpsed the fjord-side campsite, bulging with Great Whites cheek by jowl. We both thought the same thing, simultaneously!

So, as we drove off the ferry, rather than turning right to the campsite, we hung a left, and drove off up the steep hill with a series of hairpins out of Geiranger. We had seen what we wanted to see – the stunning natural beauty of Geirangerfjorden, and that’s how we would leave it.

We checked the map again, and decided to head towards Aldalsnes further north. This route took us through the Reinheimen National Park, and then onto the famous Trollstigen Pass, known colloquially as the ‘Troll’s Road’. One of our friends had told us this was a must do experience – but having just done it, I wonder if I’m still speaking to her! This spiralling corkscrew of a road is definitely not for the faint hearted! It had 11 hairpins, a gradient of 1:12 and is billed in my guide book as ‘hair-raising’. No shit Sherlock! It was the best I could do to keep my eyes open, whilst Howard slowly edged Oscar down the gradient. It was certainly exhilarating – one of those experiences that once you’ve done it, you feel pleased, and the scenery was spectacular. But let’s just say, we won’t be doing it again tomorrow!

We found a nice campsite by the river near Aldalsnes, and have just enjoyed a tea in their cafe. Despite offering free WiFi, I still can’t get my photos downloaded, which is a shame, since I would love to share them with you. I will continue to seek out some decent signal in Norway!