Yesterday evening turned out to be a right hooley. After our G & T in the bar, we de-camped to the restaurant, having decided to treat ourselves on the last night, and also frankly fed up with, by now, very warm cheese and biscuits.

It seemed strangely quiet in the restaurant. After we finished our meal, we decided to have coffee back in the lounge bar, before heading off to bed. As we approached, we heard the now familiar sound of the accordionists. As we walked into the lounge, we discovered where the rest of the passengers had gathered. It was completely heaving with people, all standing in circles, linking arms, like in ‘Auld Lang Syne’, singing their hearts out. It was truly a sight to behold. The singing was being lead by a rather plump gentlemen in a bright red velvet jacket. There was not a single soul in the entire room (and it is a large room) who wasn’t singing and joining in the fun. Howard and I just chuckled to ourselves. Never before had a ferry trip been so eventful.

The group singing and dancing went on until 11.30pm. I suspect it was supposed to finish earlier, since I gathered on at least two occasions that they were playing the last song. I must admit that this whole episode was quite infectious. I found myself tapping my feet, and humming along. Howard even had a little jig.

Eventually the lights went bright, and people started making their way back to their cabins, all with smiles on their faces.

This morning was tough. The tannoy came on at 7am to say that we would be arriving in Denmark in the next hour, and we were to vacate our cabins. The mood amongst the passengers was definitely subdued, as we all sat quietly waiting for the car deck to open.

As predicted, we were the last car out, bar one other. We were completely wedged behind a small truck, whose canopy was less than a centimetre from one of our wing mirrors. Howard stood protectively guarding Oscar, like a worried parent.

Eventually disembarked, we headed for town to stock up on supplies and do some chores. Howard was in desperate need of a haircut, as am I. We found a barbers, but all the female salons were closed. Despite just asking for a tidy up, the barber set forth on Howard’s hair with gusto. He came out a new man. A new grey man! The barber had somehow managed to cut all his brown bits off, much to my horror. Every time I look at him now, I’m wondering who is this in the van with me?!

We returned to the campsite where we stayed the night before catching the ferry to Iceland, nearly a month ago. We needed to return here, since a certain person (and it wasn’t me), purchased a new Camping Gaz cylinder here, but was so busy gassing to the woman, that he left it behind on the counter. We realised the error as soon as we had landed in Iceland, and called the campsite, who agreed to keep it for us until we returned. We ended up cooking in the van much less than we had anticipated whilst in Iceland, largely due to the poor weather, so as it turned out, we hadn’t needed this spare cylinder after all. 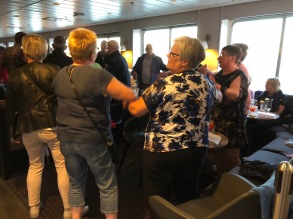 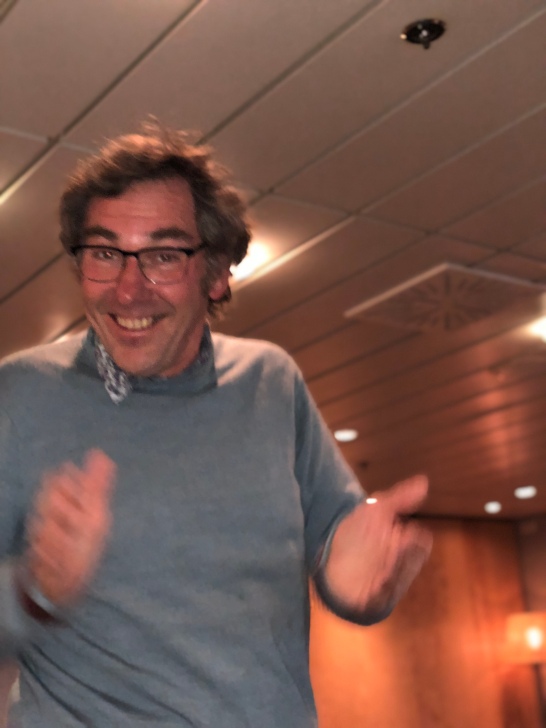 We had just set up camp in our previous pitch, and put the table and chairs out, when a sodding ‘Great White’ came and parked up right next to us (despite there being an entire field to pick from), and faced themselves so that they are looking straight into our van. What is it about these people?!! Howard looked their vehicle up on Google – it is an all-singing, all-dancing £108,000 vehicle. Who would spend all that money, and then spend their vacation parked within two feet of us? I have given Howard full permission to snore all night long!

The rest of the day was spent doing chores. We filled three huge washing machines with dirty washing (none of the campsites or guest houses had washing facilities in Iceland), and tried to plan for the next stage of our trip.

Having been chilled to the core in Iceland, we are now finding the weather way too hot for us. This afternoon, the temperature must have reached thirty degrees, and we just wilted in the heat. I know – there’s no pleasing some people.

We have an early night planned, after our abrupt start this morning. Hopefully, the ‘Big White’s’ TV won’t keep us awake. Otherwise, I might have to set Howard off singing his bass part from Oklahoma. Okla – homa! Okla -homa! That should do the trick!

I leave you with just a few photos from last night – the band, the Compere, the audience dancing, and Howard dancing (sorry rather dark)! Also check out the new grey man!|