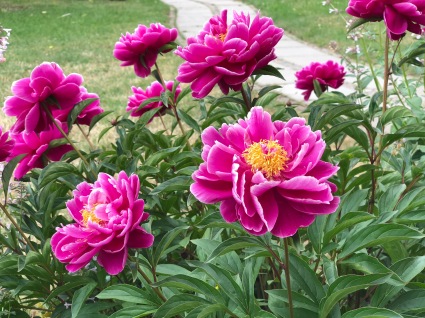 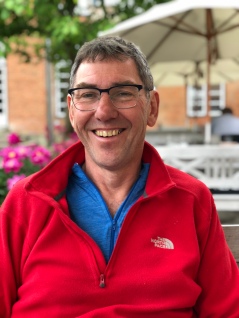 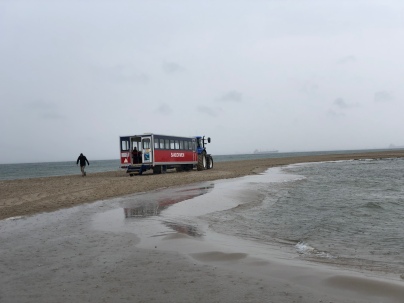 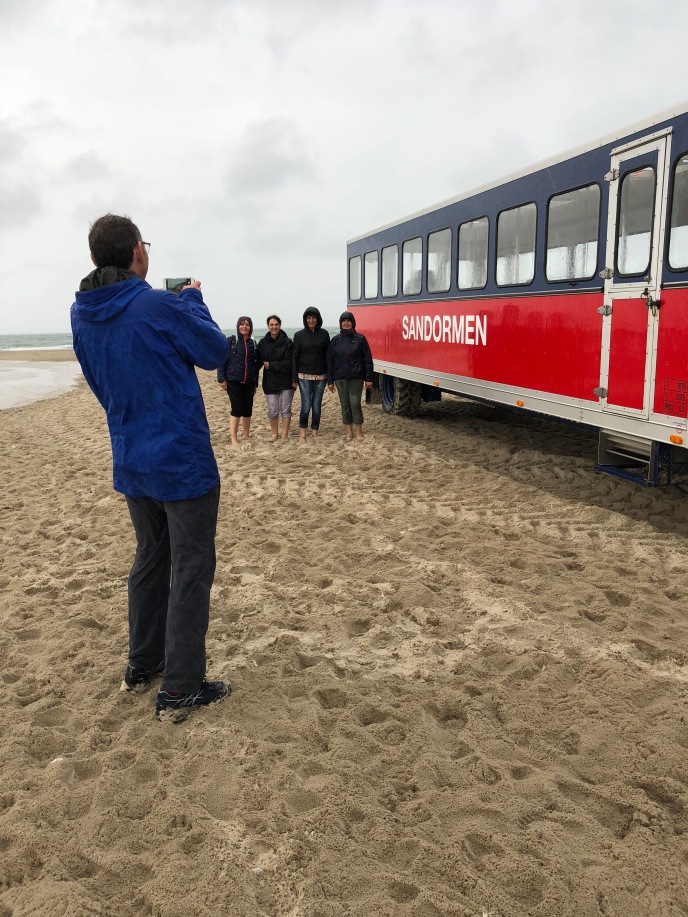 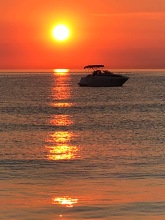 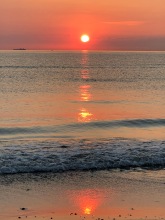 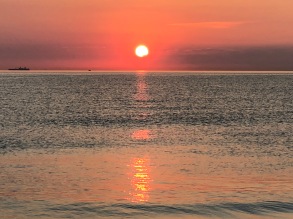 Today started with promise. It looked to be another hot, sunny day. Howard and I decked out accordingly in shorts and sandals, and sat in the sunshine to eat our breakfast. We considered a bike ride, but thought it might get too hot, so opted to leave it until the evening, when it might be cooler.

So instead, we decided on a short trip northwards to Skagen (pronounced skain), to the most northerly tip of Denmark. Within minutes of setting out, the clouds started gathering. By the time we arrived, in retribution for moaning yesterday about being too hot, the weather started to look decidedly dodgy. First we explored the town, which was much larger than we had expected. Typical of Denmark, it was spotless and very well ordered. All the buildings in the old town are painted ochre, with red roofs. Apparently it is local custom that every Whitsuntide, everyone re-paints their homes in ochre and lime, so maintaining the pristine and uniform appearance.

My guide book had recommended the Skagen Museum cafe as a good place to eat – so we headed there for coffee and a bowl of soup. It was indeed lovely, the cafe set in peaceful gardens, with a profusion of beautiful pink peonies growing all around. As we left the cafe, it started to drizzle. Undeterred, we had a quick look around the town. They seem to specialise in museums in Skagen. As well as the town museum, there was a Teddy Bear Museum and an Artist’s Museum. Apparently the luminous light in Skagen is favoured by artists, a little like St. Ives in Cornwall, and has given rise to the ‘Skagen School’ of artists.

We then headed up to the peninsula. By now the rain had truly started. The top at Grenan is a narrow stretch of dunes, with sandy beaches either side. The very tip is just a few metres wide where the waters of Kattegat and Skagerrak meet, and you can put a foot in either ocean. Since, by now, the rain was of stair-rod variety, we opted to make the journey out to the point in a Sandormen, which translates as ‘Sand Worm’. This actually sounds much more exciting than it really is – in reality it turns out to be a tractor-driven carriage. The benefit of this mode of travel though is that it is rain-proof.

So a hardy group of us set off on the short journey out to the point. When we arrived, it was raining so hard, that some of the passengers opted not to even get off the vehicle to have a look, but of course, we did. Stood at the water’s edge was a group of young girls who had obviously walked out to the point, but were mightily relieved to see that a means of transporting them back had just arrived.

As I walked around to take a photo of the Sand Worm before getting back on board, who should appear but David Bailey again. As I looked up, there he was, taking photos of the young tourists. First a pair of Oriental girls, and then, seeing that this was his thing, another larger group asked him to take their photo. It really is beyond comprehension how often he manages to get asked to take people’s pictures!

Very bedraggled from our trip, we headed back to Oscar to dry out. We got chatting to an English couple who had spotted our GB plates, and wanted to know about our trip – I think all the flags on the inside were a bit of a giveaway!

Back at the campsite, we decided to pop the few yards along the road to a restaurant we had spotted. The menu was only in Danish, so Howard tried to use his special ‘Translate App’. ‘Ah’, he said, ‘Hospitalised Shrimps!’ Clearly, the App isn’t that good! We ended up eating our bodyweight in fish. Howard opted for their tray of six fish, cooked in different ways – smoked mackerel, hot smoked salmon, fish cakes, prawns, some sort of fish terrine and a grilled fish of unknown origin. If you think that sounds a lot, the size of my fish and chips was humungous. The piece of cod fell off both sides of the plate. Needless to say, Howard ended up with seven pieces of fish – his six, plus quite a lot of mine. I’m hoping all that fish oil will be good for his hair!

Tomorrow we catch the ferry to Sweden. Not many photos today because of the weather – the sunset was taken last night, from the beach by our campsite. We will leave Denmark with very fond memories – a lovely country with charming friendly people. Definitely a place to return to in future.

P.S. Have just managed to add photos for Days 147 and 148 that couldn’t previously add, in case anyone interested!