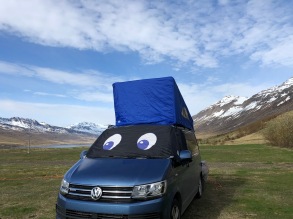 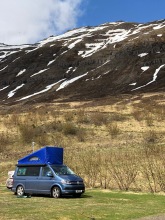 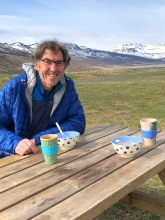 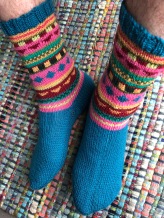 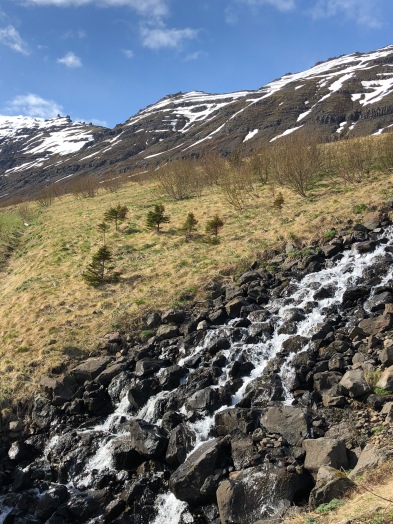 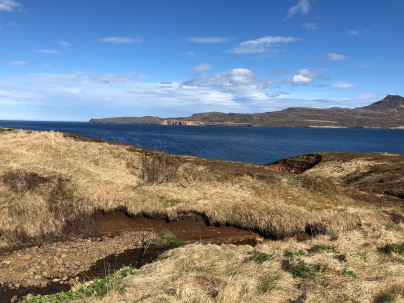 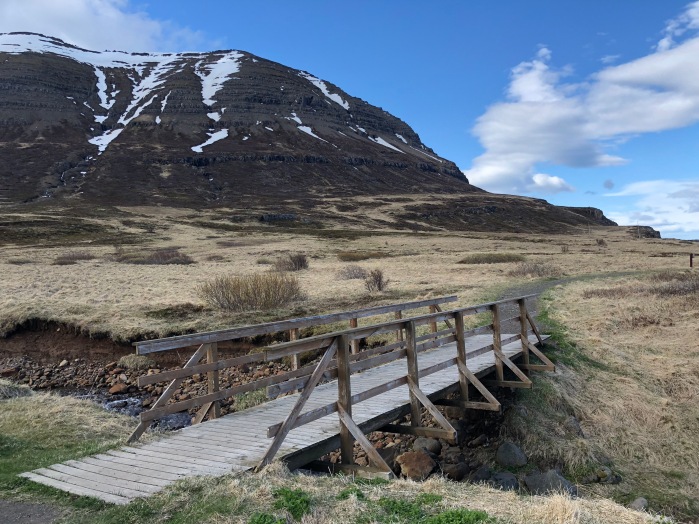 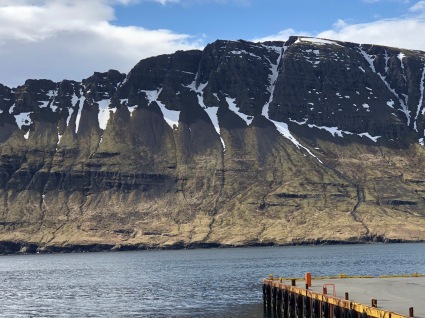 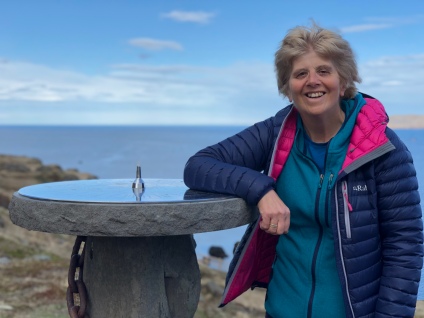 Last night was not as cold as I had anticipated, made considerably warmer by running the van’s heater on low all night. The showers were probably the hottest that we have experienced the entire trip, with no timers or extra charges, but as Howard pointed out, power is not a problem in Iceland due to the large amounts of geothermal energy produced. Howard met the Frenchman in the shower block this morning, and enquired as to whether he was cold in the night. He replied that he was using a 30 TOG sleeping bag, designed for polar expeditions, but was still chilly.

This morning was bright and sunny, with clear blue skies, but by mid-morning, it was clouding over – I suspect that this will often be the case – we may have to get used to having early starts and making the most of the weather.

After breakfast, we walked down into the town. It is an attractive settlement sitting on the side of the fjord, which at this point is very narrow. On the other side, basalt mountains plunge down onto the fjord, very much like Wastwater in the Lake District. The rocks are coloured an olive green in places due to the vegetation, and the rock layers are highlighted as thick grey lines. On their tops, there is still a considerable amount of snow, which as it melts, are forming waterfalls and streams, forming vertical fissures down the mountainside. It is a dramatic scene, one which I can see a full 180 degrees from the window of Oscar – quite spectacular.

Our trip down to the village was productive. We bought some groceries, then found a lovely little coffee shop, which also doubled up as a woollen shop. We had noticed yesterday after coming off the ferry, that in the supermarket in Seydisfjordur they had an entire aisle of various colours of balls of wool – an interesting local variation! Knitting is obviously very big in Iceland, since in the shop where we had purchased our flag, the two elderly female shop assistants were sitting at the counter, knitting needles in hand.

After consuming one of the best coffees we have tasted the whole trip, certainly since Italy, we proceeded to browse at the woollens. The outcome was a jumper for me (which matches Oscar’s colour blue perfectly), and a pair of multi-coloured socks for Howard. He picked the pink and turquoise pair. The lady looked a little baffled, perhaps they were meant for women – but Howard was delighted with his purchase.

As we were walking back to the campsite, we spotted a huge ‘Big White’ slowly processing along the High Street, like it was looking for something, and had thought that perhaps by the time we returned to the campsite, we would have company. But when we returned, the Frenchman had left, and we are still the only ones here.

As a result, we opted to spend another night here. It is unlikely that we will find another campsite in such a wonderful position, with copious hot water, all to ourselves. It may well be one of the best campsites of the trip, since looking in our Camping Card brochure, most are sited in the centre of towns, and many look like car-parks. Less than fifty percent have hot water or showers – I guess they are mainly catering for the bigger camper vans that have all this on board. Since last year, they have made it illegal to ‘Wild Camp’ in Iceland – the numbers of camper vans here in the height of summer were clogging up the place, and were likely a bit of a blot on the landscape. As a result, the Icelanders opted to keep them all to certain camping areas, which is fair enough.

This afternoon we took a walk along the shore of the fjord to the headland. We were lured on by the deep blue sky ahead, only to turn around to see rain clouds fast approaching. We got back to Oscar just as the first drops were starting to fall.

We will probably spend another day or two exploring the Eastern Fjords. Certainly at the moment, we seem to have the better weather over this side of the country.

I will leave you with some photos of the views from our site and around Neskaupstadar. Check out the socks – he thinks he looks the bee’s knees now!!