Today, our day ended up completely differently as to how we had planned it. Last night, we sat in Oscar, and plotted our route south, selecting a campsite in one of the East Fjords a little further south from Nordifjordur. This morning, we awoke to brilliant sunshine, and a clear blue sky. The water in the fjord was still, and there was barely a breeze. The scenery looked utterly stunning. We still couldn’t believe our luck to be the only ones in this wonderful campsite. Perhaps they knew something we didn’t!

After packing up the van, we decided to have one final coffee in our lovely coffee / woollen shop. The two ladies from yesterday greeted us like long lost friends. We ordered our coffees and selected a cake from he counter. ‘Ah!’, said the lady, ‘That is my Happy Marriage cake’. Apparently the recipe had been handed down from her grandmother, to her mother, to herself, and now her daughter makes the cake. We laughed, and told her our surname. ‘Then this cake was meant for you!’

It was indeed a very fine piece of cake, and as we sat chatting to the two of them, the ladies asked us where we were going next. They frowned. Then they proceeded to get the weather forecast up on the internet for us to see. There were strong gales forecast from tonight, covering almost the whole of Iceland, but especially worse in the south east, just where we were heading. After much discussion, they sent us the few yards to the swimming pool, which doubles up as a Tourist Office. There, the man greeted us like he knew us. Turns out he had been on the ferry from the Faroe Islands, and thought we looked familiar. He then studied his computer intently. We explained that our difficulty with the California, was that we were unable to put up the pop up roof in high winds. He advised us that the only part of Iceland being spared from these severe gales was the North East corner. He recommended a campsite in one of the National Parks, and bade us farewell with ‘Bless, bless’, which is apparently a farewell greeting for friends. We were touched. So often, a visit to a place is made special by the people that you encounter along the way, and without exception, everyone in Nordifjordur was welcoming and went out of their way to help us. We left with very fond memories of this place.

So that is how, when we left Neskaupstadar, instead of turning south, we headed north. But is definitely one of the advantages of not planning too far ahead – our flexible approach had paid off.

The first part of our journey today passed vistas of spectacular snow capped peaks. Then the mountains gave way to gently undulating valleys, with the odd volcanic peak. The landscape changed from snow on rock, to moorland and pasture land. At one point, Howard and I commented virtually simultaneously, how similar this landscape was to Sutherland on the North Coast 500 – it was just like being back in Scotland. Later, we stopped for a roll and drink by a waterfall, or ‘foss’ as they call them here. The water made a thundering noise as it descended – the snow melt is really underway here now.

Although the road was near deserted, and tarmac most of the way, we found our progress was quite slow – these are not the sort of roads to drive fast on. By mid afternoon, we realised that we would never reach our campsite in a decent time. Despite it staying light here until nearly midnight – we are now approaching the Arctic Circle – we had both had enough of driving. So we shifted to ‘Plan B’ and decided to email a B & B that was on our route. Due to poor reception, we only got the reply in when we were just 10 miles away – yes, there were vacancies. When we got out of the van, the wind had picked up, and we could barely open the doors. If this is the best of the Icelandic weather, then we have made a wise decision. 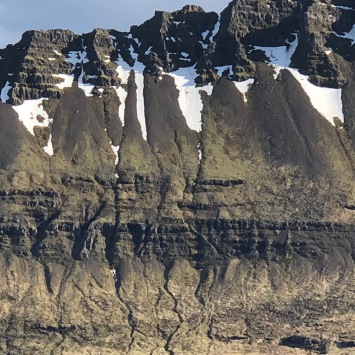 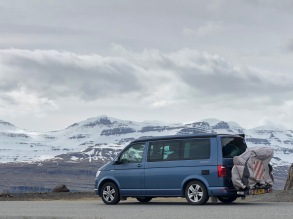 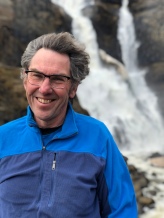 We are now holed up in a lovely old Icelandic farmhouse. Our bedroom has windows on two sides, with views out to the mountains, the river below and out along the fjord to where it meets the sea. Howard has just dozed off on the bed – so he clearly had had enough! Our host tells us that following an eruption of the volcano Askja in 1875, over a thousand of the villagers here chose to emigrate to Canada – an extraordinary number considering how small the town is. It was effectively left as a ghost town for many years. She regularly has visits from Canadians descended from the Icelandic migrants, in search of their ancestors.

So a day of meeting lovely people and changing directions. I’m wondering what tomorrow brings?!

P.S. Looking at where we are headed – looks like there will be no WiFi, and not sure whether I will get any 4G – so may not be able to post blog for day or two.