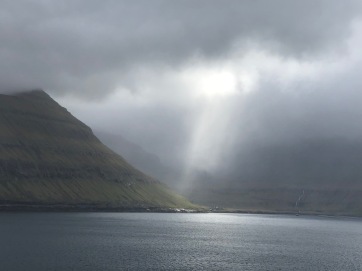 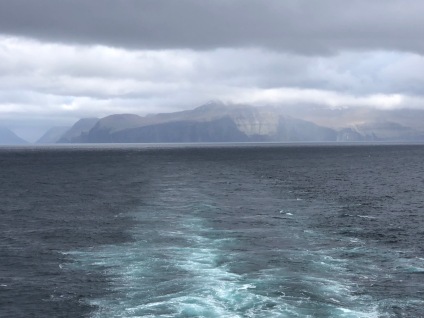 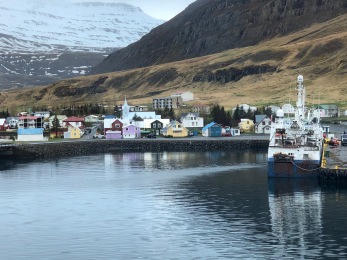 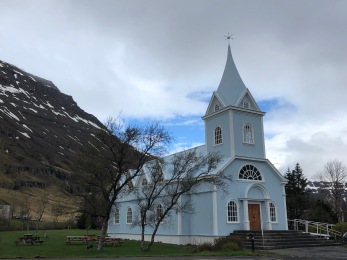 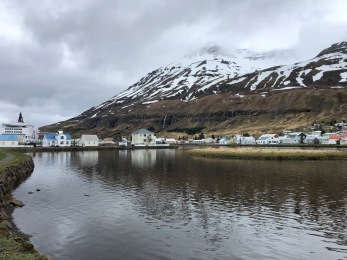 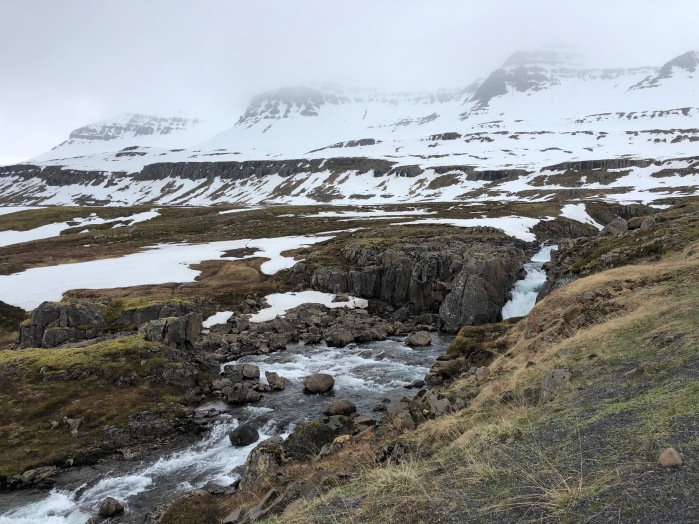 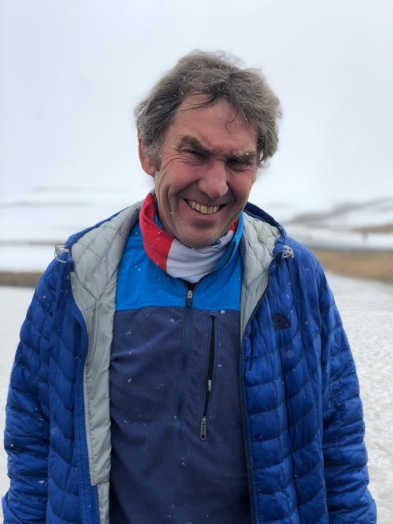 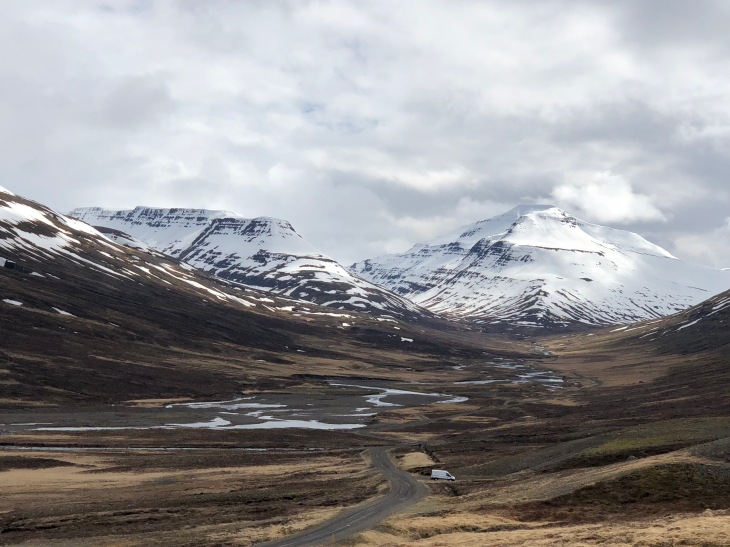 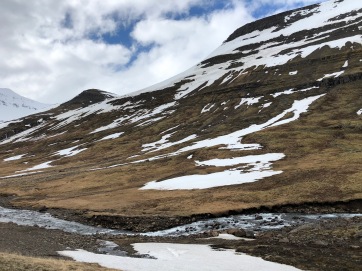 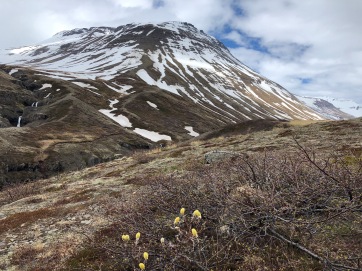 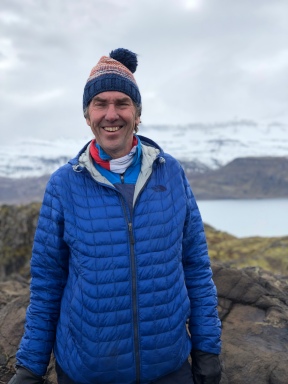 So, we’ve finally arrived in Iceland. As we sailed in to Seydisfjordur in the Eastern Fjords first thing this morning, first it started to rain, then sleet, then snow. A few hardy souls stayed up on deck to witness our arrival, but the wind was blowing a gale, and it was almost impossible to stand upright without hanging on to something. Fleetingly, I had a flashback to Cres in Croatia – the warm sunshine, the al fresco dining, the gently lapping shore, the ice-creams, the shorts – then I jolted back to reality – we had arrived in Iceland. As Howard wryly said, “The clue’s in the name”.

Disembarking off the ferry was an adventure. The car deck was packed so tightly, that people couldn’t open the doors to get in their cars, yet alone transfer their bags back. We devised a nifty solution. I crawled under the side of the car, slid in through the side door, whilst Howard passed me, bit by bit, the contents of our holdall in small ‘gap sized’ pieces until it was empty. He then slid the empty holdall through there gap in the door, but  Howard was still left outside himself, unable to get back into the driver’s seat. Eventually, he limboed in through the passenger door, after breathing in deeply. The guy in the van next to ours was neither able to get his bag or himself bak into his vehicle until we had moved.

Getting off the car deck involved reversing, with approximately two inches of space either side, and no wing mirrors, since they were collapsed in. I just screwed my eyes up and refused to look, as two crew members gently coaxed Howard out of our very small hole.

So then we found ourselves ashore. Thankfully the rain had abated, and we took stock.

We had already decided last night, that initially we would go clockwise for a bit, having looked to see where the ‘better’ weather was. What we hadn’t decided was where we would stay. The tiny town where we landed at the end of a stunningly beautiful fjord apparently had a camp-site in the middle of the town. We checked it out. It was essentially a windswept car park.

We then referred to our Iceland camping card booklet – and there were several options a little way south. We stopped for a coffee (at the petrol station) and a quick wander around. It was a pleasant little place, with brightly coloured houses with corrugated iron roofs collected around the head of the fjord. There was a lovely little church, painted pale blue, with a rainbow coloured path leading up to it – great fun. We stopped by a small knitwear shop, that also sold flags, and purchased our Iceland flag. We also paid a visit to the town’s supermarket – about the size of ‘Morning, Noon and Night’, and bought essential items like bread, milk, yoghurt, chocolate and Pringles. Then we were off!

It wasn’t a huge distance to the next fjord south, where we had decided to camp, but the going was slow. No sooner had we exited Seydisfjordur, than the road started to incline sharply, and within minutes we were above the snow-line. A sign at the side of the road indicated it was zero degrees, and once more, a few flakes of snow started to fall. Snow lay along the geological layers of the dark grey mountainside, contouring the mountainside, and making the landscape quite stark. All around, fast flowing streams were gushing out of crevices, and here and there, waterfalls were tumbling over the rocks.

Several times, I got Howard to stop the car, so I could take some photos, but it was bitterly cold, and I could only bear to be outside a couple of minutes, before I started to shiver. In reality, this is of course no cooler than the first week of our trip on the North Coast 500 – but having become accustomed to much warmer weather, it is going to take some getting used to. Even the day before yesterday, I was sitting out of the deck of the ferry, and the sun was so hot that I had to retreat into the shade, for fear of burning. What a difference a day makes!

Having reached the summit of the mountain, we then had to drive down the other side, so we took it very slowly indeed, for fear of black ice. On the hair-pins, I just hid my head in my hands, until I could sense they were past. Once down in the valley, we repeatedly stopped along the roadside to take in the views – just stunning.

A couple of other campervans stopped besides us at one point at a viewpoint, and we wondered if perhaps they were heading to our campsite. When we did eventually arrive here, we completely missed it at first. It is essentially an elevated grassy field, with a small hut at one end, which functions as the toilets and wash block. If it hadn’t been for a lone Frenchman in a tent (bbrrhhh!) – then we would have passed it by. The photo in the brochure showed a campsite filled with camper vans – but today, we are the only ones, with a view to die for, looking out along the fjord.

As I am typing, Howard just shrieked and frightened the living daylights out of me. ‘Look – in the field!!” he shouted. Just yards from the back of Oscar, four reindeer were strolling past. I crept outside to try to take a photo, but two young girls walking their dog came running past, and frightened them away. So that is where we are now. Sat in Oscar, having a cup of tea, wearing our puffy jackets, still pretty cold – but in the most spectacular place. Thankfully, the wash block is heated, and there is hot water, but whether or nor I can muster the bravery to go outside and shower is a another matter. I did wonder this morning on the boat, whether that may be my last comfortable shower for a while. I should count my blessings though – at least I’m not in a tent, like the Frenchman.