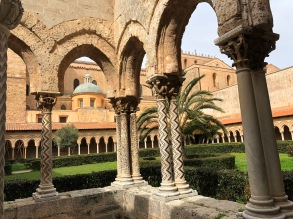 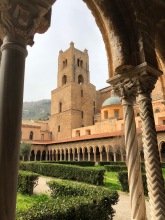 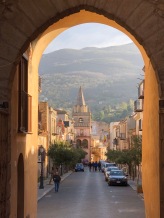 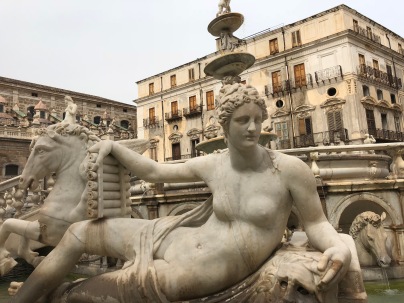 Today turned out to be another good day. We had bought ourselves extra time in Palermo, by staying last night in a hotel in the city. The hotel were happy for us to leave Oscar tucked up safe and sound in their secure car park for the morning. So after breakfast we walked back into the old part of the city, with the aim of visiting the market. En route, we came across a gorgeous old piazza, with the most splendid series of fountains and a profusion of statues of gods and goddesses. Many of the statues were of partially dressed men and women, and although the women were delicately covered up in their nether regions, the men were clearly showing all they had!
We eventually found the market, and had a wander around. We were temped with the lovely looking artichokes and fresh fruit, less so by the pungent smelling fish, but in the end declined to buy anything, apart from a Sicilian flag to go with our Spanish, Italian and Scottish ones. We never managed to pick up a Portugese one, so will have to search for one on our return. Just along from the ‘flag man’ was a dodgy looking shop selling fake Police ID badges and gun holsters -I’m not sure what that was all about!
We re-traced our steps back to the hotel, and at the last minute decided to make a detour on the way to our campsite to a hill-town a short distance outside of Palermo called Monreale. Driving through the suburbs to get there was a bit of a nightmare, but definitely worth the effort.
Monreale is famed for it’s majestic cathedral, the Duomo, built by William II to rival any of the cathedrals in other European cities, and also to outshine the Palatine Chapel in Palermo itself (the one we visited yesterday) built by his grandfather. It combines Norman-Arab-Byzantine architecture, and is renowned for its mosaics of biblical scenes crafted in the late 12th century. For us, however, the delight was the stunning cloisters, which have a distinct Arabic feel about them, with symmetrical patterned mosaics on the columns, and intricate carving on the masonry. When we visited, it was lunchtime, and we had the cloisters virtually to ourselves for most of he time, and so were able to lap up the tranquility of this stunning space. It was hard to drag ourselves away from this calm and meditative place, but we were keen to avoid the Friday afternoon Palermo rush-hour, so headed on our way.
We opted to stay back on our campsite from two nights earlier, with the beautiful views out over the Tyrrhenian Sea. It had been quite cloudy and overcast in Palermo throughout the morning, but as we headed east again, the sun came out, and so we detoured away from the coast up to a mountain town called Castelbuono, situated in the Madonie Mountains. As we deviated away from the coast, we were suddenly in the most gorgeous countryside, with heavily wooded valleys of oak, ash, beech, almond and hazelnut. The scenery was sublime, and it was a real relief to be out of the city and it’s frenetic traffic. The road twisted and turned up to Castelbuono, a pretty town built around a 14th century castle. We had a brief wander around the medieval town, and noted some of the narrower streets were buttressed across to the other side of the passageway. From somewhere, there was the most divine smell of warm chocolate, but sadly, I failed to locate its source, much to my disappointment. After walking up to the castle, we headed back down to the coastal road, and along to our campsite.
The good news is that the owner, our Leo man, had saved our ‘special’ pitch for us. Even better news, is that the Pizzeria by the entrance has just opened for the season. So it’s pizza for tea tonight. Can’t be bad!