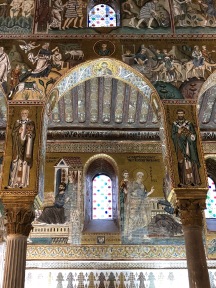 Our plans changed unexpectedly last night, when we had been unable to contact the campsite that we thought we had booked into just west of Palermo. Despite two emails and a phone call, we had received no reply. We therefore reached the conclusion that the campsite was closed. We had planned to stay there for two nights, and tomorrow get the train into Palermo, leaving Oscar tucked up safe and sounding the campsite. So instead, at the last minute (on last minute.com as I recall), we booked a hotel room for tonight in Palermo.
As we sat eating breakfast this morning, a pleasant, but rather smug German from a huge ‘big white’ came over to talk to us and have a nose around Oscar. Sometime in the dim and distant past, he had owned a VW camper, but now he had moved on to ‘bigger and better things’. After he had proudly described to us the exact dimensions of his huge beast, down to the last centimetre, he proceeded to ask us of our plans for the day. When we told him we were driving to Palermo, he tutted, and advised us against it at all costs.
A little apprehensive, but undeterred, we set off for Palermo. However, as we approached, we became more and more nervous. I sat in the passenger seat trying to distract myself, by swatting up on Palermo in my Lonely Planet guide. It was then I read the words, and I quote, ‘Sicilian drivers are some of Italy’s most aggressive, with a penchant for overtaking on blind corners, while holding mobile phone in one hand and gesticulating wildly with the other….Driving is frenetic in the city (Palermo) and best avoided, if possible.’ Needless to say, I opted not to pass this gem of information on to Howard, as we approached the city outskirts. Well – it was indeed scary, but under the circumstances, I think we did pretty well, particularly since daft Boris decided to lead us down one of the main thoroughfares of the city. Frankly, by the time we had arrived at our hotel, I felt that we had already seen most of it.
But in the end, we found the hotel, parked Oscar in their secure car park (our German friend had assured us that the bikes would go – for sure!), and went to check in. The receptionist took one look at us and sat us down with a coffee and pastry to revive ourselves. She was utterly charming, and after all the formalities of paying, passports etc, we got chatting. When I told her that we had driven Oscar in Rome and Naples, she replied ‘Oh my God – Rome, Naples and now Palermo – there is nowhere in the world now that you cannot drive!”. I quietly patted ourselves on the back.
Then just as we put our bag up into our room, an email pinged in from the campsite to say, yes, they were open! We laughed, and set off to discover Palermo.
In general, I’m not a great fan of cities, and hadn’t much been looking forward to this one. Howard, though, felt a trip to Sicily wouldn’t be complete without a look. How glad I am that we braved the traffic. The city has an air of shabby chic about it, and is a place of contradictions. On the one hand, there are all the trappings of a wealthy place – an elegant row of shops with Louis Vuitton, Prada and Gucci. On the other, there are signs of neglect and decay on some buildings that have clearly seen their day. One area of the city was so run down that Mother Teresa likened it to a shanty town, and opened a mission there. But juxtaposed with this decay, is a thriving vibrant place, with clearly signs of wealth – new cars, smartly dressed men and women and plenty of good looking bars and restaurants. We walked up the main pedestrian street Via Maqueda up to Quattro Canti, the main intersection in the old sector of the city. We found a charming square, Piazza Bologni, where musicians played by the fountain, entertaining diners at the restaurants. Further back, a sparkling clean black Range Rover and a Porche sat parked under rusting ornate balconies, so neglected that they were growing weeds.
The old quarter is a fusion of Byzantine, Arab, Norman, Renaissance and Baroque. We continued on to the Cathedral, the outside of which was just stunning. It’s Arab-Norman Architectural style, which sounds bizarre, but actually looks amazing, is in stark contrast to the rather dull interior. Moving on, we visited the Royal Palace, and went to look at the 10th century Palantine Chapel. Again, I’m not normally one for this sort of thing, but wow – it took your breath away. It’s interior was completely covered in mosaic tiles, including the ceiling. For me, it was more beautiful than the Sistine Chapel in Rome, and totally unexpected.
So sometimes, a day turns out much better than anticipated, and today was one. I like Palermo. I can cope with the roughness at it’s edges, and am really pleased we took the time to see it. I’m also quite pleased that I don’t have to contend with the alleged four-minute, timed and charged for showers at our original campsite – I shall be giving our hotel a much better review!

One thought on “Day 64 Cefalu to Palerma, Sicily”