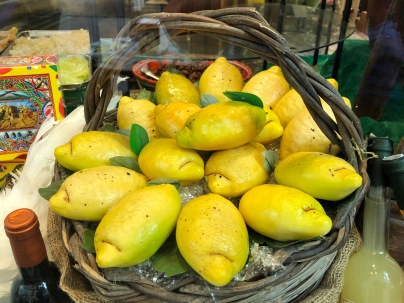 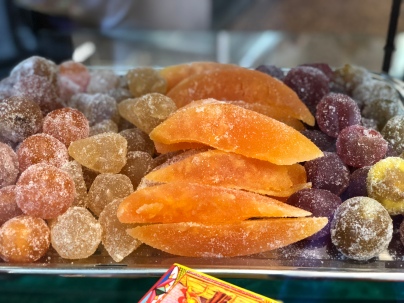 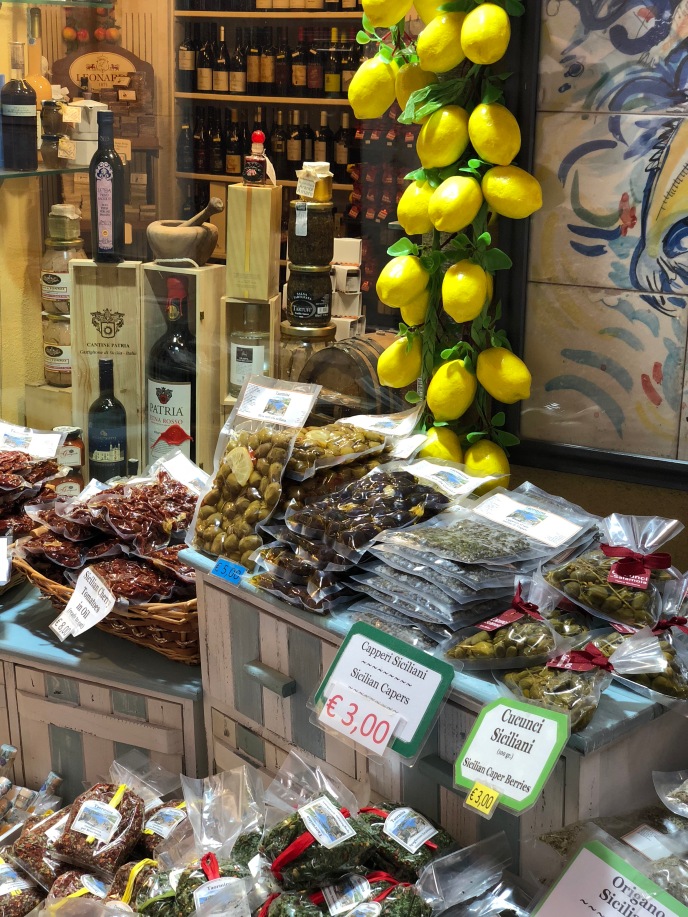 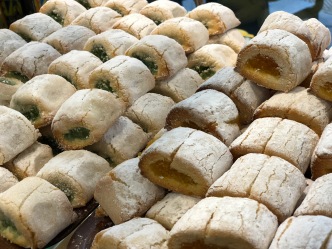 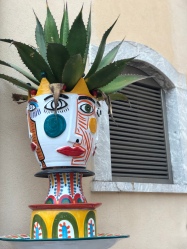 Last night was a blast! We ended up at a one year old’s birthday party, or almost. The campsite owner, Mr Leo, had recommended the restaurant next to the campsite. It turns out that’s because he owns that too. So Howard and I turn up at about 7.45pm to find that we’re the only ones there. But we’re greeted warmly by Mr. Leo, who seems to do the front of house, and shown to our table, which seemed to be one of the only ones not reserved. On the far side of the restaurant, a large u-shaped table was made up with 47 places set. Half an hour later, a young couple arrived with an infant (the birthday boy), and tons of balloons. The balloons were liberally scattered on the floor of the restaurant, and some large blue helium balloons, ready ‘First Birthday’ were tied to a chair on the top table. Over the course of the next hour, the guests slowly dribbled in, accompanied by a good few toddlers and infants. By now, Mr. Leo seemed to be nursing a very new born baby and the chatter in the room was growing in volume by the minute. Whole family groups were there – parents, grand-parents, aunts and uncles, as well as the children. Eventually, at about quarter past nine, the starters were brought out. Infants were being propped awake in their high chairs, and the party began. Howard, who was facing all the action, gave me a running commentary of that was going on, and commented that this was much better than watching the television. We eventually left just before ten, by which time there was not a sign of the main course. This party was clearly going on until the early hours. It seemed to us that it was a huge gathering of family and friends, and if I’m honest, little regard was being paid to the birthday boy, who was still being forced to stay awake, but clearly everyone was having a ball. It remained unclear whether Mr. Leo was related to the party, or whether he just included child care in his job specification, but he made the effort to come over and talk to us about the Sicilian menu that Howard had tried, and was clearly very proud of his establishment.
The night went downhill a bit from then onwards. It was windy as we walked back to the campsite, but within half an hour, it was blowing a gale. Our external topper was flapping wildly, and the whole van was being buffeted by the wind. We looked up the weather on the internet, and it said wind speeds would pick up to approaching 40mph into the early hours. So we made an executive decision that we should take the pop-up down and sleep downstairs – the first time this trip. So Howard bravely ran outside in his swimming trunks to take the topper off, fighting not to let it blow over the cliff into the sea. Needless to say, we didn’t sleep well until the wind had died down, at about 6am.
By the time we got ourselves going, and had re-filled with water it was late morning. We then drove eastwards, back past Messina, the ferry-port, and then southwards down the east coast to a place called Taormina. As before, the motorway tracked through a series of long, poorly lit tunnels. Although on this occasion, they had clearly read my comment about not changing the lightbulbs, since they had helpfully put up signs in some places saying ‘Galleria non illuminata’ – no lights in the tunnel.
We didn’t arrive at Taormina until late afternoon. Parking Oscar was a whole other story that I won’t bore you with, but Howard noted that his pulse rate had tripled on his Garmin! The town sits on a steep hillside, looking out over the Ionian Sea, and is a popular tourist destination. It is a good looking town, and it knows it. First impressions are that it seems to be filled with rather beautiful people, wandering around the narrow streets, looking in shop windows, spending lots of money. The town is very attractive, with lots of medieval buildings, churches and piazzas. My initial feelings were that it was more touristy than I would like, but after an hour wandering around, I started warming to it. It had a confidence about itself for sure, but the visitors were all enjoying their promenade, and looking happy. Howard left me for a few minutes to drop some wine bottles back at the hotel, and I stood in a plaza, listening to some musicians, and people were spontaneously joining in the singing, and a couple even got up and started dancing. The shops were filled with tasty pastries, marzipan fruits (a speciality) and lots of brightly coloured ceramics. So I think we will warm to this place, once we get a chance to explore it properly tomorrow. In the meantime, Howard has just brought two Italian maintenance men into our hotel room, and there is lots of gesticulating going on at the small insects coming out the bath taps! Might as well be camping!!