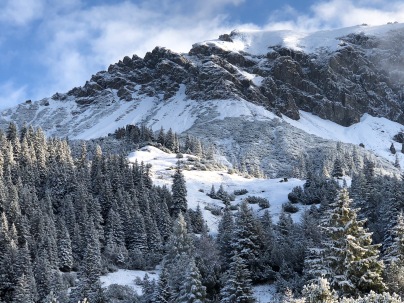 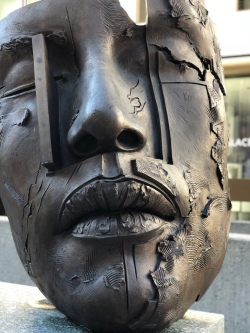 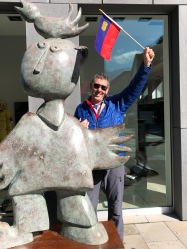 It continued to snow overnight, and by this morning, there was a dusting of snow on all the surrounding mountains. When Howard went down to check on Oscar, he reported that ‘the boy’ was also covered in snow. Within an hour of first light, the clouds started to clear, and patches of blue appeared in the sky. The scenery looked magical – a real winter wonderland.

Before breakfast, we had a quick wander around the village. Already a bus load of walkers had appeared, a family were out with their sledges, and the ski lift had commenced operation, although, as far as we could tell, there was no-one on it.

After breakfast, we slowly descended from 1,600 metres back down the mountain, down a  seemingly never-ending series of hair pin bends. We made our way to Vaduz, the capital of Liechtenstein, a short distance away. I’m not sure what I expected, but was pleasantly surprised by this pristine little place. It had one wide pedestrianised street, full of public artworks in the form of sculptures, mostly contemporary. We visited the museum shop and purchased a flag, and then set of in search of a coffee shop. I can officially declare that, to date, Liechtenstein has set the record for the most expensive coffee on our tour of Europe. At £10 (yes, you heard correctly!) for two coffees, by far eclipsing Venice and even Norway, this tiny little place has managed to put itself top of the list. We had expected Monaco to win hands down, but having been unable to even park in the principality, we will never know if it could have claimed the prize.

No matter, it was a good coffee, and the loos were very clean, which is often our sole reason for stopping. To our surprise, walking back to Oscar, we came across two tour groups of Koreans, dutifully following their tour leaders flag. I don’t even need to tell you what Howard did next, but you will understand me, when I tell you that I followed the flag all the way back to the van. Such little things really seem to amuse him these days!

We headed off westwards, very shortly passing back into Switzerland. We joined the motorway, and drove for about two hours, before we came to yet more stunning scenery. First we passed lakes, with mountains as their backdrop, then the peaks started to become more and more impressive. Passing through frequent tunnels, we first came to Lucerne, then Interlaken, which as the name implies, sits between two impressive lakes. We then got into real wow factor scenery as we approached the Jungfrau. The mountain ranges here are truly spectacular, with perpendicular towering cliffs on either side of a narrow valley, following the course of a gushing river.

We had been recommended our campsite by a lovely couple who were on the pitch next to us in Tuscany. They live in Switzerland, and had suggested this campsite as one of their favourites. Taking tips from locals is always a good call, and indeed, the setting for this site has to one of the most stunning locations on our trip. That said, it also happens to be one of the most expensive sites, but I guess that we are in Switzerland, after all.

Within minutes of arriving, we seemed to be the centre of attraction. First, a lady from Ireland came over to chat, and admire all our flags. Then a man and his son from Liechtenstein, pitched next to us in another California, came over to take a look. He was immediately impressed that we were flying our new Liechtenstein flag, and seemed very intrigued by our topper, which we had put on for the first time in three months, to keep in the warmth. I must say, without even a front windscreen cover for insulation, the two of them must be absolutely freezing in these conditions.

Once set up, we went for a walk along the valley. The sound of cow bells rang out all around us, and we stopped at one farm and purchased some home made cheese, being sold from an honesty box outside. I am always a great fan of places with honesty boxes. It suggests a type of community that is trusting of people. They are commonplace in small villages around the West Country, and we have also come across them in the Channel Islands.

After our walk, we decided to try the campsite restaurant, given the thumbs up by our California neighbour. It was in fact so popular, that we had to sit outside, with blankets wrapped around us for warmth, since all the inside seats were taken. We opted for cheese fondu, a real blast from the past. We calculated that it was probably about thirty five years ago that we last had one. The were all the rage in the seventies and eighties, and we used to frequently have friends round for supper for a fondu. The first few mouthfuls were indeed very tasty, but after ten minutes or so, we both became rather underwhelmed by lumps of bread covered in melted cheese – and certainly not good for your cholesterol! Still, it is a Swiss national dish – so when in Rome, as they say!

We have been mulling over what to do tomorrow. Initially, we had considered going on the Jungfraujoch, the railway that takes you to ‘the top of the world’, well – to the top of the Jungfrau, in actual fact. The weather isn’t looking too promising though, and it is a huge expense to travel for three hours on a train, to see nothing but cloud. So instead, we have opted to just go walking at lower levels.

Tonight, we are tucked up inside Oscar, with the heater on, and Howard is wearing his Iceland socks to keep warm. I still can’t believe that only three days ago, we were sunning it up in Corsica! But all good things come to an end, I guess.

P.S. I have eventually managed to upload all the Corsica photos, if anyone interested.