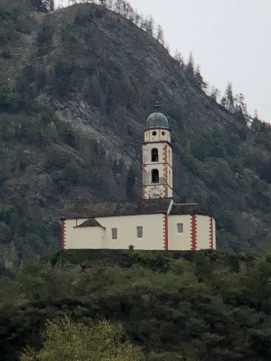 What a difference a day makes! We awoke this morning on the shores of Lake Maggiore to light drizzle and low cloud over the mountains around the lake. It was so misty, in fact, that we could barely see across to the other side of the lake. I pootled off to the shower wearing my shorts and sandals, as I had done for the past three months, but on my return, quickly changed into my trousers and fleece – there was a definite nip in the air.

After breakfast, sat inside Oscar, another change from our usual pattern of al fresco dining, we headed off along the lakeside. It was not long before we reached the Swiss border. The border guards just waived us on, without checking our passports, but we had to stop in any case, in order to buy a Swiss vignette to allow us to drive on the motorways.

A little further along the lake, we stopped at the pretty town of Locarno for a coffee and to pick up some Swiss Francs. Howard had a bit of a scare when he went to buy some more diesel, and the machine gobbled up his card. The petrol station was unmanned, as is quite common throughout Europe, but fortunately another customer managed to help him retrieve it. Once bitten, he then opted to buy the fuel with cash.

By now, the rain had really set in, so it really wasn’t a day for photography, which was a shame, since the mountain scenery should have been exceptional. Instead, we continued on our way, deciding to make a slight diversion north-westwards to visit the principality of Liechtenstein.

Our journey involved driving over the San Bernadino Pass, high up in the clouds. At this point on our trip, the temperature dropped to 2 degrees centigrade, and it started to snow. The visibility was poor, which was such a shame, since peering through the murk, the mountains looked stunning.

What a contrast from just two and three days ago! We left Corsica in temperatures of 34 degrees or more. It was 27 degrees when we arrived in Nice on the Cote D’Azur, and now it was only just barely above freezing. The one and only campsite in Liechtenstein still hadn’t returned our email, to confirm if they were in fact open or not, and at this point, we made an executive decision. We opted not to camp in these conditions, and quickly searched out a room on the internet. Howard chose a hotel up in the mountains of Liechtenstein, in their only ski resort of Malbun. It sounded more rustic than the other standard rooms on offer.

By the time we had climbed up to 1,600 metres, the snow was coming down so fast, it was almost a white-out. We quickly scrambled inside the hotel, which thankfully is warm and cosy. Our room has a balcony, with what promises to be spectacular views of the mountains, if, and when, we can see them!

Hopefully, by the morning, the sky will clear, and we can take a proper look at this tiny country. We have read that it is the 6th smallest country in the world, but per capita, the richest. It has been a mini-state since 1806, and has a constitutional monarchy, with a democratic government, like the UK and the Netherlands. It is land-locked between Austria and Switzerland, and is only 62 square miles, with a population of 37,000. Although not in the EU, it is a member of the UN and the European Free Trade Association. It has been known in the past for being a billionaire tax haven. Indeed, despite it’s limited natural resources, it is one of the few countries in the world to have more registered companies than citizens!

Tonight, we ate out in a pleasant restaurant across the square. Howard had traditional Liechtenstein cuisine, which as far as I could gather turned out to be a glorified version of macaroni cheese, with battered onions and a venison frankfurter on the top. He ended up stealing most of my grilled vegetables, which seemed to be the only healthy thing on the menu. We probably should have opted for the cheese fondue, which we only rejected because we thought it sounded too fatty. The staff were dressed in what appeared to be Tyrollean costumes, and spoke in German. For once, Howard was able to show off his language skills, since unlike me, he speaks a little German.

Tomorrow we travel back into Switzerland, but not before exploring a little more of this tiny country. Hopeful, fingers crossed, it will have stopped snowing by then!