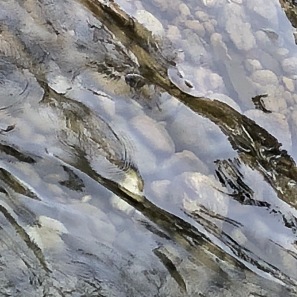 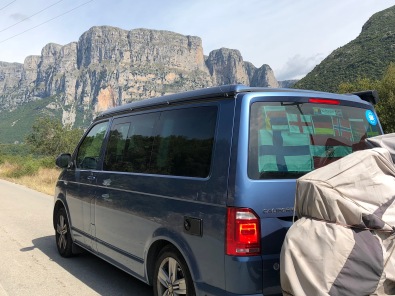 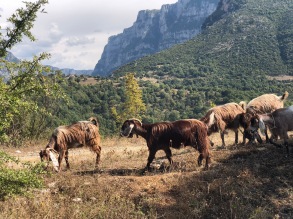 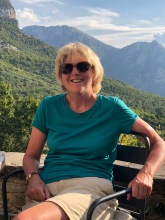 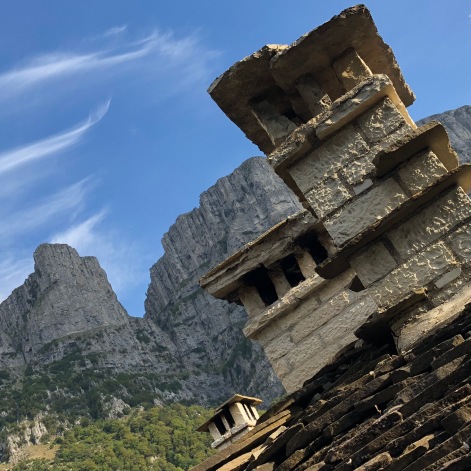 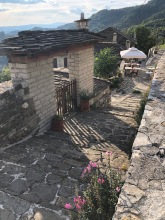 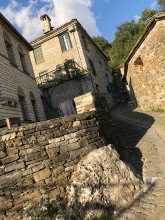 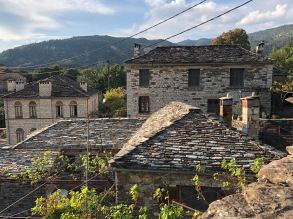 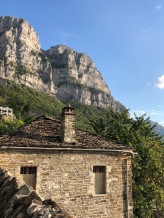 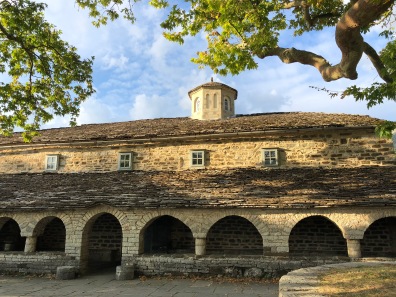 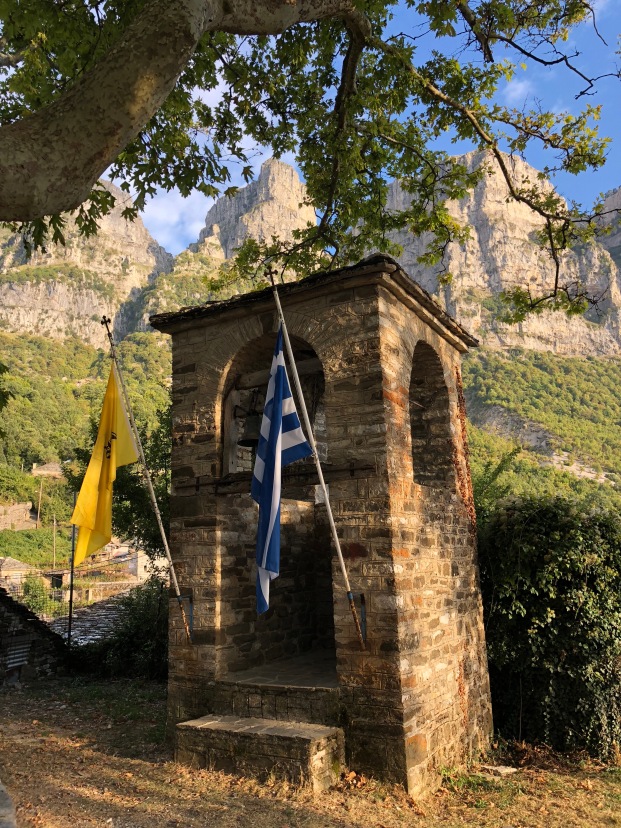 Wow! Wow! Wow! Today we left one amazing place, and came to somewhere even more incredible. We drove north-westwards, towards the border with Albania. The first part of our drive was through undulating mountain roads, with spectacular views. At one point, we stopped at the top of a hill, in the middle of seemingly nowhere, to take a look at a solitary white-washed church. It was beautifully maintained, and had commanding views across the entire valley, but we did wonder where on earth it’s congregation would come form.

After a spell on a major road, we then turned upwards towards the mountains, and the Vikos National Park. I suspect that the Greeks are keeping this place a secret, just to themselves – but fortunately, yet again, Howard’s Greek colleague has come up trumps. It is situated in a region called the Zagorohoria, which my Lonely Planet describes as one of Northern Greece’s most attractive and mysterious regions. Tucked into the Pindos Mountains, it is home to 46 traditional stone and slate villages, and the dramatic Vikos Gorge.

The villages are indeed extraordinary. It is like visiting a land that the world forgot, from another century. Perched precariously on the mountainsides, they can be seem from miles away, but the approach to them has to be seen to be believed!

We stopped for a late coffee in the tiny village of Aristi, which sits at an altitude of 650 metres.. The main street through the village is so narrow, that a traffic light system works, allowing vehicles up and down the steep winding cobblestone road that leads to and from the town square in the valley below. The small square looked out across the valley, and several attractive cafes were positioned roundabout. We called in to look at a small craft studio, of small art pieces, many made from the local wood from the Gorge. The attractive young woman who served us, told us her mother was the artist. A stunningly beautiful woman then appeared, the mother – certainly some good gene stock in that family. She was so charming that we purchased a small wooden heart to hang on a door. The gift wrapping procedure made me chuckle – it was like Rowan Atkinson in ‘Love Actually’, if anyone recalls the scene – the gift wrapping being just as beautiful as the gift itself.

A little further onwards, and we came to the Vikos Gorge itself. We stopped at a point where a beautiful stone arched bridge crossed the gleaming green turquoise waters. A trail of orange brown chestnut leaves were slowly floating under the bridge – a sign that autumn is fast approaching.

Our guide book then told us, ‘Aristi is the last village before Papingo (our destination). After Aristi, prepare for white-knuckle driving as the roads winds upwards’. It wasn’t wrong!! As we zig-zagged up to steep, ever narrowing hair-pin bends, with vertiginous drops on the edge, to add to Howard’s driving skills, we started to meet with herds of goats, cattle and even horses, just milling around on the road. As we approached the village where we are staying, we spied the stunning ‘Papingo Towers’, the towering rock formations that form a backdrop to Magalo and Mikro Papingo, the large and small villages of Papingo.

Our hotel is situated in Mikro Papingo – a stunning little place, which is completely pedestrianised, for no other reason than the fact the cars won’t actually fit down the tiny cobbled lanes, which wind steeply up the hillside. We deposited Oscar in the parking just outside, a short distance from our ‘hotel’. This place is to die for – the setting is sublime, the panoramas across to the mountains breathtaking, and the hotel is an absolute gem of a place. The building is made from the same old grey stone as the rest of the village, and is a series of rooms set around stone terraces, on different levels. We immediately felt as if we had struck gold with this place. Our feelings were confirmed as we took an early evening stroll around the village. It is just gorgeous – so un-touristy and authentic, just our sort of place.

We finished off the day with a simple meal in the hotel restaurant, which views across the valley to the blazing red sunset. As an out of the way place to visit, this must be one of the best. Tomorrow we plan to have a ‘driving-free’ day, and enjoy some walking in this spectacular area.