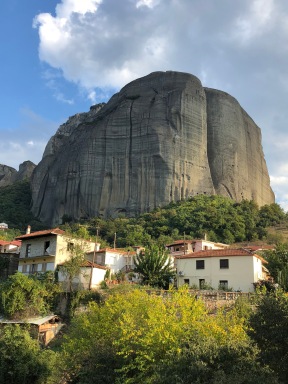 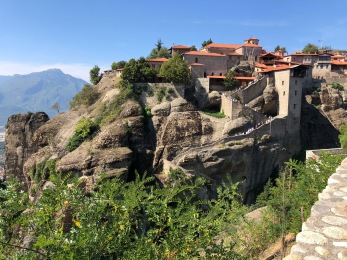 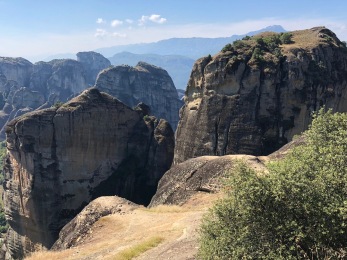 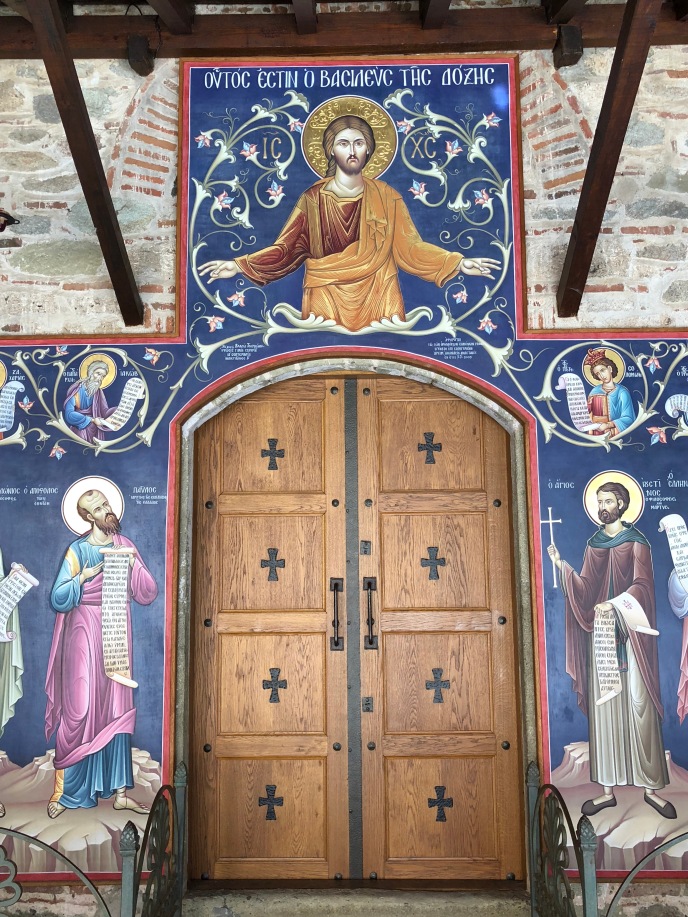 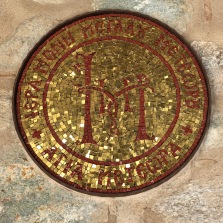 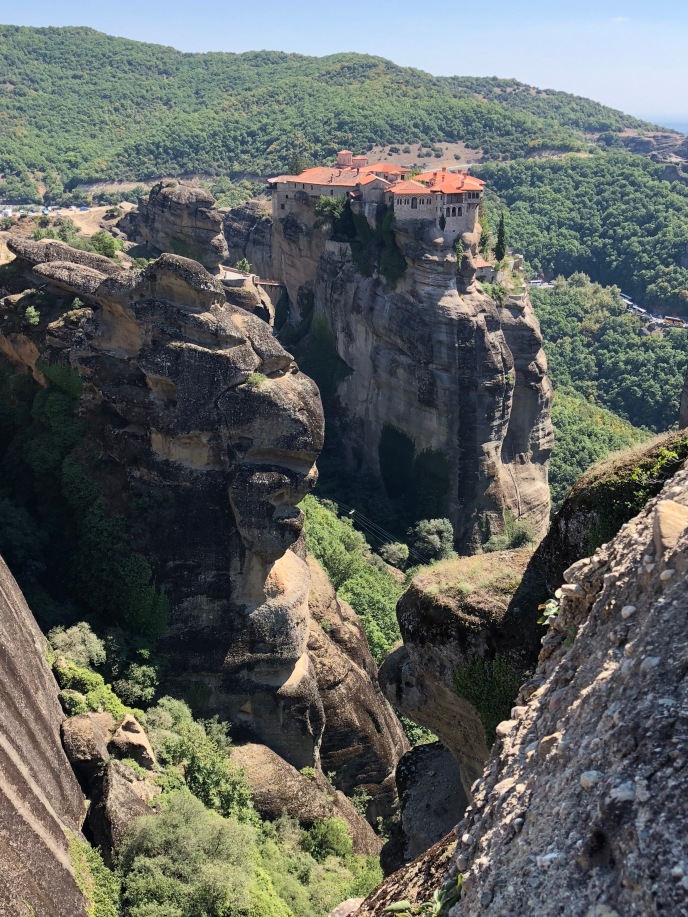 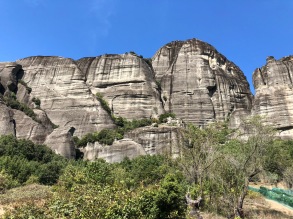 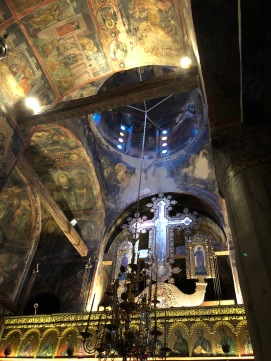 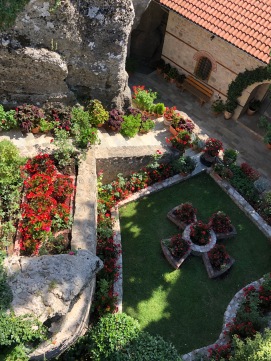 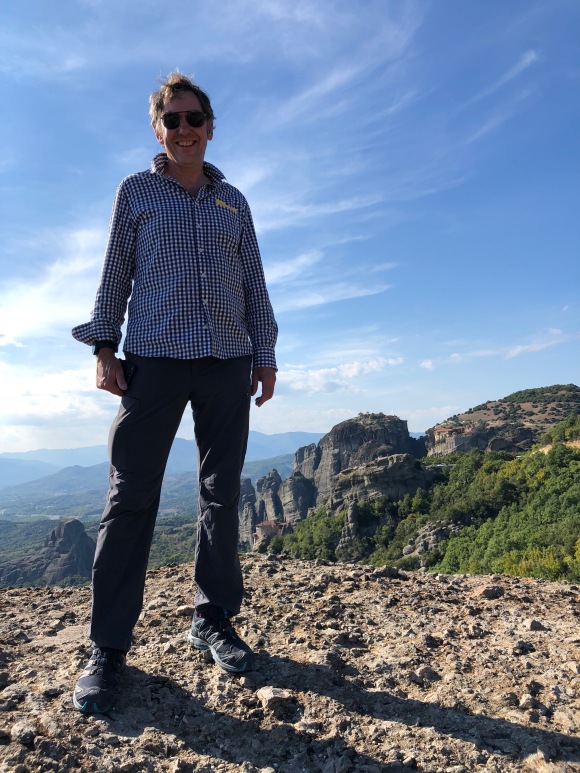 Today has been a busy one. After breakfast, we set off to the nearby town of Kastraki on a mission. On our evening walk last night, we had spotted a studio selling brightly coloured kinetic mobiles. They had intrigued us, and we went back to explore. We ended up having a long chat with the lovely man who made them, and couldn’t resist making a purchase. Yet another piece of clutter for the van, but thankfully packed flat, so taking up very little room.

We then set off up the mountainside to Meteora, to visit some of the amazing monasteries that sit perched on extraordinary pinnacles of rock. By the time we arrived at the first one, it was already busy, and the heat was rising. It was a steep walk up many stone steps to reach the monastery, and at one point, we had to walk through a very narrow tunnel formed in the rock. But it was worth the effort. The views from the top were amazing, looking out over the other weird rock formations, and across to other monasteries.

The first one we visited had on display the old carpenter’s workshop – which seemed to be mainly involved in making wine barrels, no doubt imbibed by the monks. The old kitchen was also just as it had been centuries before. Howard spent a while absorbing facts in the little museum. He returned mainly with a series of gory stories relating to the religious frescoes on the walls. Many of them seemed to involve burning victims to death (if they didn’t have the correct faith), enveloping them in a stoney tomb whilst still alive (again, if they wouldn’t renounce Christianity), or the ultimate – being decapitated, resulting in sainthood! Religion has a lot to answer for!

At one point in history, there were twenty four working monasteries in operation in this area, but now only six are still active, two of which are inhabited by nuns. In total the monastic population is now only fifty six – fifteen monks between four monasteries, and forty one nuns between the two nunneries. The monks must be rattling around! A definite win for the ladies, it would seem! These days, the enterprising nuns seem to spend most of their time selling small religious trinkets in the gift shops that they operate, and judging from the numbers visiting today, they must do pretty well. Another success for the ladies!

After our long morning, we were starting to expire in the heat, so wound our eye back down to the town of Kastraki for some refreshment. Two unfortunate things happened over lunch. Firstly, the restaurant started paying ‘Zorba the Greek’ – they really do like this tune, as does Howard. Secondly, as we left, Howard forgot to pick up his cork hat.

We didn’t realise that ‘Corky’ was missing until we started to walk up to one of the nunneries in the afternoon. The worried look on Howard’s face was a picture. I really don’t think he enjoyed the nunnery visit – he was too busy fretting over his hat.

I took pity on him, and when we got back to Oscar, before heading off on our other visits, we re-traced our steps the couple of miles down the road to collect his trusty friend. Phew! It was still there. The restauranteur really didn’t have good enough English to understand Howard’s account of having the only cork hat in the whole of Scandinavia and Eastern Europe!

We competed our tour of the monasteries by driving to the very top of the plateau, to look back over this remarkable sight. The geology in this area is truly remarkable, and quite how these monasteries ever got build it quite phenomenal. It was yet again down to Howard’s friend, Alex, that we discovered this amazing UNESCO area. We are delighted that we have seen for ourselves this part of Greece – very different from the coast to which most tourists are drawn to.

We finished off our day with yet another wonderful meal in the campsite taverna. The family who own this site most be sitting on a gold mine. Whilst all the other Greek campsites are winding down for the season, this one is completely full. The large group of Slovenian ‘Big Whiters’ were all eating in the taverna tonight. They sat at a long tressle table, and before they ate, they all stood up, sang the Slovenian National Anthem, and gave a toast. Quite touching, and considerably more melodic than the British one! For once, I had warm feeling towards people in ‘Big Whites’. Perhaps I’m going soft in my old age!!