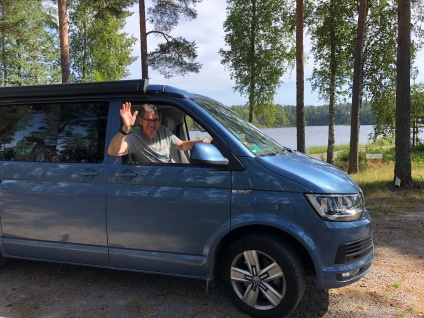 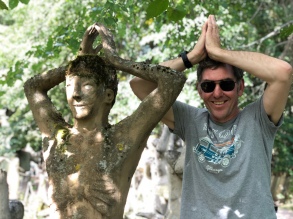 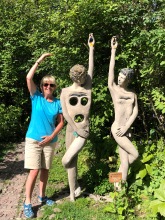 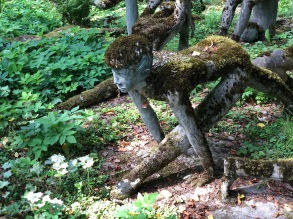 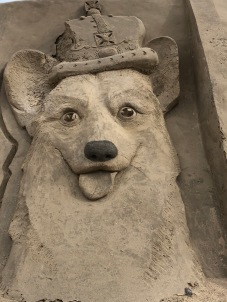 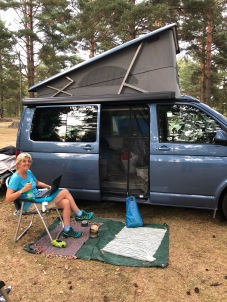 Our pitch last night was close by to the lake-side sauna. As is common in many of the Finnish campsites, a morning sauna is included in the price of your night’s stay. So this morning, as we were getting up, I watched a trail of people coming in and out of the sauna. They are segregated into male and female sides. Once inside, you have the option of either throwing yourself under a cold shower after sitting a requisite amount of time in the steamy heat of the sauna, or plunging oneself into the cold lake water. From my observations, it was the women who were diving into the lake, and the men, once inside, didn’t re-appear until leaving – so presumably they were of the cold shower variety.

As one young Russian man left the sauna, I saw him eyeing up Oscar. He came over to speak to us. He said he had never seen a van like ours before, and asked if he could bring his wife over to see it. We, of course, happily agreed. A little while later, he appeared back with his wife. We showed them around (!), and discussed the pros and cons of such a camper. They really enthused about it, and said it was just what they were looking for. It turns out, they live in St. Petersburg, and they gave us their contact details, should we ever visit in future. We have come across more and more Russians, as we have travelled further east in Finland – this is clearly a popular holiday spot for them, being just across the border.

We packed up, and headed south, back in the direction of Helsinki. The road we were following came incredibly close to the Russian border at one point, literally, just yards from the road, across a railway line. In the distance, we could see a Russian watch tower sitting in the forest. We stopped at the nearest lay-by / picnic area, really just to take a look at Russia! Unexpectedly, we found ourselves by the entrance to a Sculpture Park. Intrigued, we took a look inside. What we saw was quite extraordinary. Hundreds and hundreds of sculptures, mainly of figures, scattered through a little woodland glade, leading into a garden area.

It turns out that these sculptures, crafted from concrete, five hundred and sixty in total, are all the work of one man. His name was Veijo Ronkkonen (1944 – 2010), and this was his lifetimes work, over five decades. Granted, they are not in the league of Anthony Gormley or the such like, but nonetheless, they create quite an incredible sight. Further, since many are set in woodland, they have started to become incorporated into the landscape, with moss and ferns growing on or around them. The largest concentration of figures are in a large circle, all doing various gymnastic or yoga-like poses. A little further on, there were a group of ballerinas, and then a series of painted characters from different parts of the world. Howard found one depicting a hippy wearing bright yellow bell-bottom trousers. We both laughed, and I made him pose next to it. For any of you who remember Howard in the seventies, you will know why! When I first knew him, his favourite outfit was a pair of yellow bell-bottom flares, and a bright yellow, low necked t-shirt with a teddy bear logo! Sounds awful? It was. Looking back, I wonder what on earth I was thinking of!! Although, of course, back then, it was the height of fashion.

We continued on to the town of Lappeenranta, the South Karelian capital and former frontier garrison town. The creation of the Saimaa Canal in 1856 made it an important trading centre, but these days, the canal is used mainly for cruises between here and the Baltic at Vygorg, and on to St. Petersburg. The former had previously been Finland’s second largest city, before it was lost to Russia.

As we were looking for a cafe along the waterfront, we stumbled across something called Heikkalinna. Every year, in the summer, around thirty sand artists from Finland and abroad, gather to create a giant themed ‘sandcastle’, made from about three million kilograms of sand. We stopped to have a look. This year’s theme seemed to be different countries. Finland was represented by a collage of all its famous castles. The Netherlands was depicted by a tasteful scene involving windmills and Van Gogh’s tulips. Spain was represented by depictions of Gaudi’s buildings in Barcelona. You get the gist. And guess what Great Britain was shown as? You will never guess – a Corgi wearing the Queen’s crown!! It was so funny, we laughed out loud. So that’s what the EU thinks of us!

After stopping for a very good coffee at a cafe run by a Coffee Grinder company, we continued on our way. We eventually reached our campsite at Kotka just around six. It is pleasant enough, surrounded by woodland of pine and birch, next to a sandy beach. The only problem being, is that the reeds by the shore seem to be generating a lot of pesky little flies. So as I type, Howard had surrounded me in protection. I have the coil smoking, the citronella candle burning, the smoke emitting lamp on, as well as the personal smoking waistband machine pumping out pungent insect repellent. It will be a miracle if any fly gets past these barriers. That being said, I have noticed that Howard, having left me outside typing the blog, has holed himself up inside the van, behind the mosquito netting. I suspect he is using me as a decoy! Probably retaliation for me letting on about his yellow bell-bottoms!!