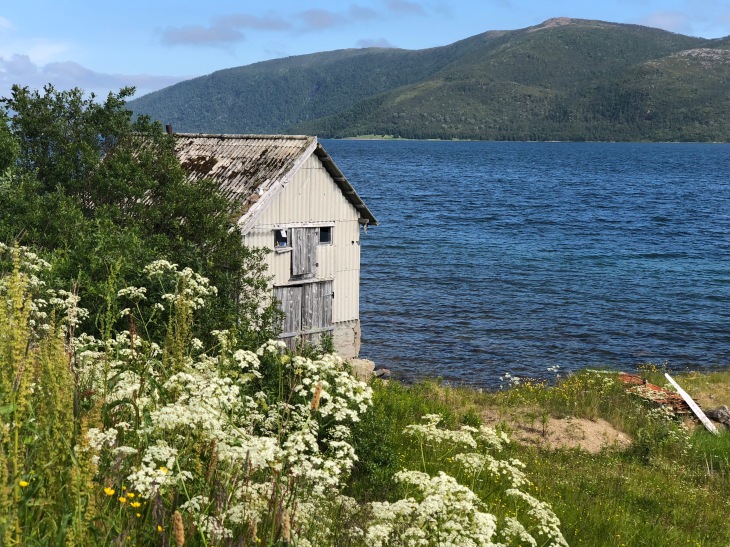 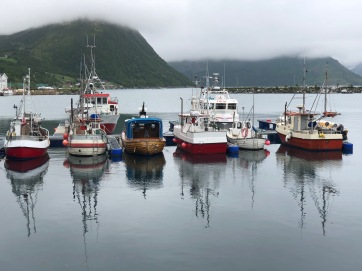 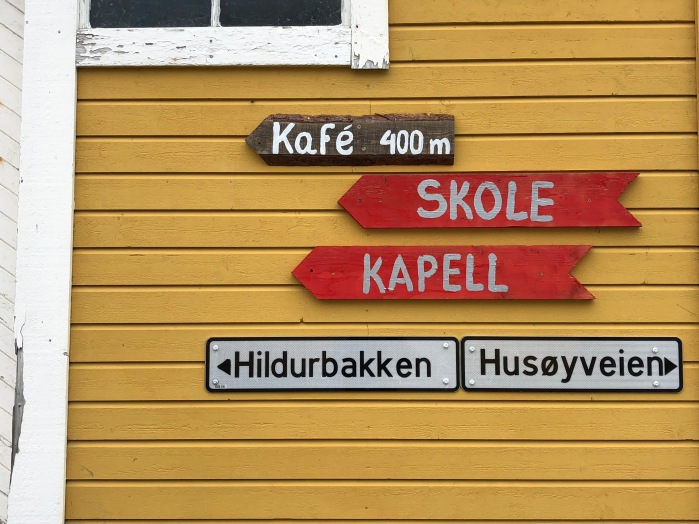 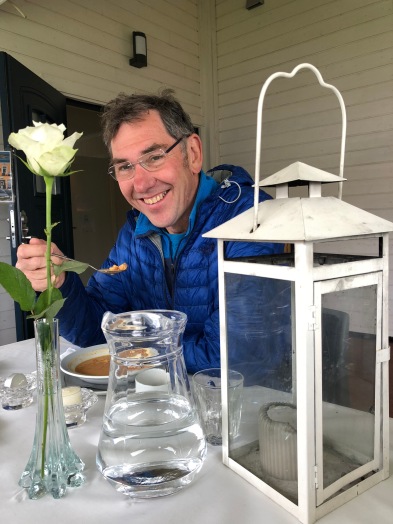 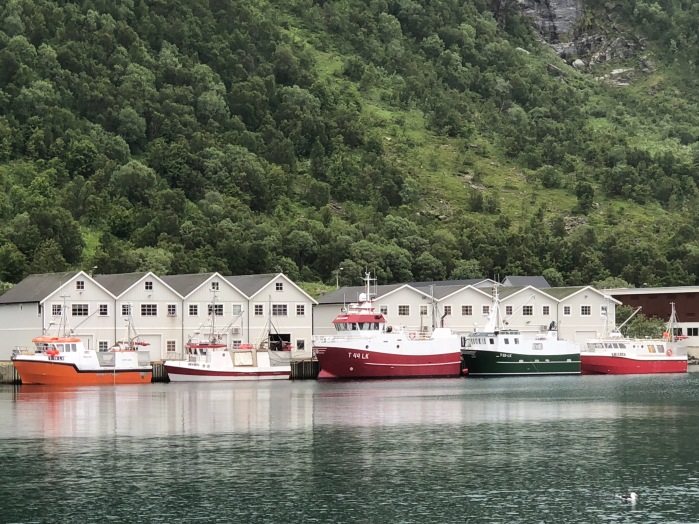 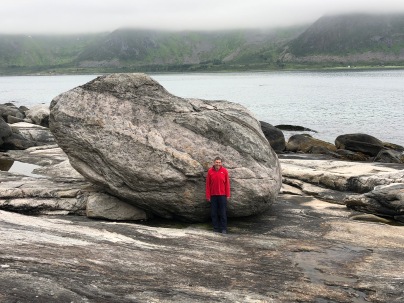 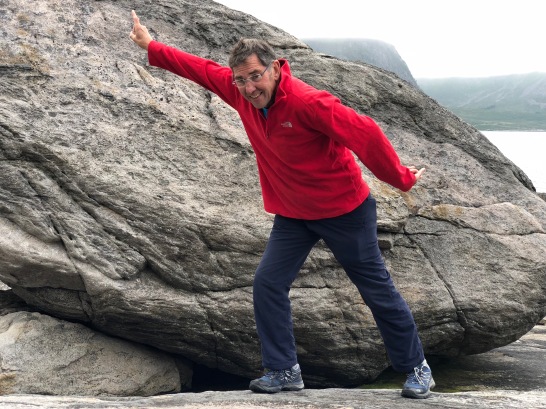 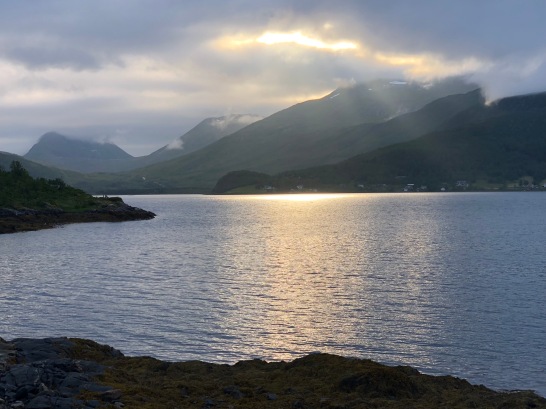 We spent the first half of the morning trying to get vaguely organised for Oliver’s arrival tomorrow. We really hadn’t given it a great deal of thought up until now, apart from picking him up in Tromso. The plan will be to head north, and explore some of the remotest part of Arctic Norway, called Finnmark. I must admit, I do have considerable reservations! Howard has decreed that Oliver should bring a sleeping bag with him, and sleep in the pop-up tent like Edward had done in Croatia. I keep saying to him, ‘Yes, but that was Croatia in the warm spring – this is Arctic Norway in their very cold summer’. But Howard is taking none of my suggestions on board about perhaps renting a cabin. We will see. If the poor lad starts to freeze, we will have to re-think, I suspect. Talk about tough parenting!!

Back to today. After a very murky start, the sun peeped through for about half an hour, I guess. We drove first to check on times for the ferry tomorrow morning, to take us into Tromso. Job done, we headed along the northern coastal route, first to a lovely little village called Husoy.

Husoy is in fact a tiny island, joined to the mainland by a man-made 300 metre causeway, that also acts as a breakwater for the small harbour. At one point in it’s history, Husoy had one of the largest fishing fleets in Senja, and clearly from looking round the harbour, fishing is still the mainstay of income here for the two hundred residents.

The people who live here must be tough to survive the harsh winters. Many of the older timber houses had wire stays fixing the buildings to the ground, to help protect against the fierce winds. I’m not too sure how I’d feel about living in a place where you had to wire your house to the ground, for fear of it blowing away! But today, there was no sign of bitter conditions. In fact, Howard and I were totally stunned as we walked around the village. All the pretty wooden clapboard houses had beautifully kept gardens, many with a profusion of flowers growing. It was extraordinary to see blue Himalayan poppies in bloom, alongside lilac, roses, pansies and penstemon. Once more, we had to prick ourselves that we were in the Arctic Circle. I’m guessing that Senja must also benefit from the Gulf Stream, like it’s neighbour Lofoten – although this afternoon, once the sun had disappeared, it definitely felt like Arctic temperatures.

I asked a local lady walking her dog if there were any cafes in Husoy, since this place is so far off the main tourist route, I had thought it unlikely. It turns out, though, that there is one, in the building that doubles up as the village hall. We walked in and were pleasantly surprised. Many locals were sat around tables, mostly eating some of the delicious cake selection on offer. We opted for coffee, and Howard tried their fish soup, which he reported as excellent. The table where we sat had a white tablecloth, lantern, and white rose in a vase – very sophisticated.

After our lovely coffee /lunch stop, we headed westwards along the wiggly northern coastline. Unfortunately by now, the weather was closing in, and the spectacular views of steep mountains plunging into the sea, largely evaded us. All the mountains were enveloped in cloud and mist, so we just saw the very last fifty feet or so plunging into the deep fjords. I can imagine, on a good day, that this place would look sublime, but just not today. Along the route, there were a series of single lane tunnels, always an interesting game, praying that you don’t meet another vehicle in the middle. Some were almost a kilometre long, with just the odd place hollowed out a bit more, which served as a passing place. There were plenty of cyclists out today, and we both commented to each other how ghastly, and dangerous it would be, cycling through these tunnels. On the way back, we realised how they had solved this problem. At the entrance to every tunnel was a sign, reading ‘Cyclist in Tunnel’. Next to the sign was a button, for the cyclist to press as they entered. This resulted in a post with flashing lights being activated – very smart, but still not attracting me to tunnel cycling!

A little further on we came to a viewpoint. In the lay-by were brightly painted old tyres, being used as plants tubs, with a profusion of plants growing – very effective. There was also a poster on the notice board advertising ‘The Tour de Senja’, a cycle race around the island, which takes place tomorrow. It’s a shame we will miss it.

Also on our route, we passed by Ersfjordstranda, with it’s lovely white sandy beach at the head of the fjord, and famous for it’s rather quirky gold-plated toilet facility. We stopped briefly in Mefjordvaer, another fjord-side habitation, and finished our tour at a viewing platform made from Siberian larch on a promontory separating two fjords. In the tourist brochure we had picked up, it promised us stunning views of the razor-sharp mountain peaks. We laughed – we couldn’t even see the mountains, yet alone their peaks. There was, however, some remarkable rock formations by the platform, carved out by glaciation, along with huge ovoid ‘incidental’ rocks, spat aside by the glacier. Probably a geologist’s dream location.

By now, it was getting late, and so we turned tail and headed back to our campsite. We still have some ‘van tidying’ to do, before we pick up Oliver, and we need to make an early start (well at least, early for us), in order to catch our ferry.

I imagine that since we will be on the road with Oliver, I am unlikely to get the opportunity to blog, so I will take a rest for a few days, and resume once he is away. I’m really not sure how the poor lad will react to this tiny space, and the cold conditions, so I’m guessing there will be lots to report. Watch this space!!