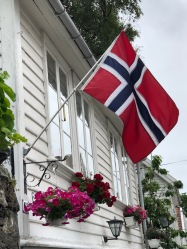 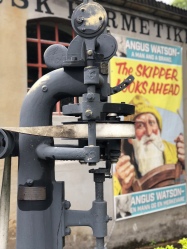 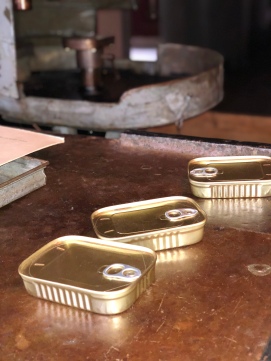 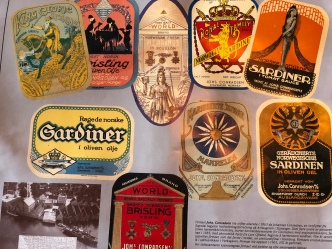 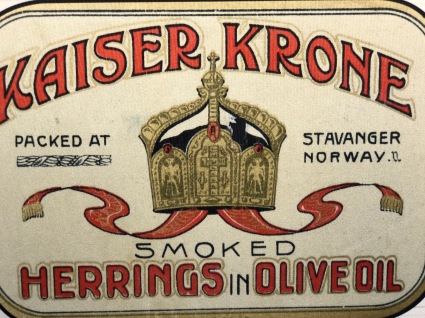 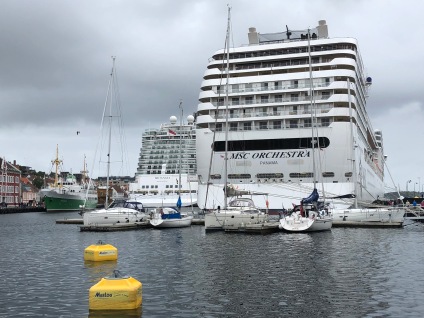 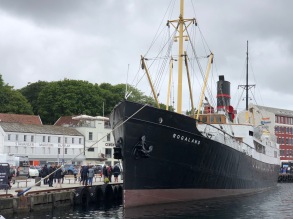 Today our plans changed due to the weather. We had hoped to take a boat trip from Stavanger to the beautiful Lysefjord, and it’s famous Pulpit Rock. However, the weather was so grim this morning, that we saw no point in a boat trip in the pouring rain, and instead opted to explore Stavanger.

Stavanger is a Norwegian coastal town with a population of over 210,000, and has shown much enterprise over the years. It used to be the centre of the herring industry in Norway, and led the way in the canning of sardines. Then, when the fishing declined, it diversified into ship building. More recently it has become the centre of rig production for the offshore Oil Industry. It is also an important ferry hub for many local ferry services, as well as ferries from Denmark.

Also, as we discovered to our detriment this morning, Stavanger is also a regular port of call for the huge cruise liners that travel up the western coast of Norway. Today, three such liners had just come in to dock, depositing 6,000 passengers into this modest town. They sat at the dockside, completely towering over the town. Now, I know I‘ve had a rant about this before, and I know I will yet again offend my friends who go cruising – but frankly, they were an eyesore. Any why three at at time? The gorgeous town of Stavanger was suddenly swamped with so many people, many of whom had numbers stuck on their lapels, signifying which tour group they were with, and following behind a guide with said number of her flag or stick. I really do loathe this type of mass tourism. It shows no effort or initiative. ‘Today we did Norway, tomorrow we’re doing Finland’. How such large groups of people can ever get a real feel for the place is beyond me. They must think that these places are permanently heaving. The locals, although admitting that they are good for the economy, generally loathe them too. The guy in the coffee shop just raised his eyebrows as he announced to us that the cruise ships were in town today, apologetically.

No matter, I thought. I had a plan that I thought would be foolproof. I announced to Howard over coffee that we would be visiting the ‘Sardine Canning Factory’ – no-one else would possibly want to go there. Wrong! As we arrived and bought our tickets, so did half the cruise ships passengers. I commented to the lady, that I had hoped we would be on our own. She laughed, as she explained that the cruise liners had now put it on their itinerary, as it was such an unusual museum. Yesterday, we would have had it to ourselves, but not today.

By now, we had already purchased the ticket, so thought we’d give it a go, anyway. As it turns out (don’t laugh), sardine canning has a very interesting history, and I was completely fascinated by all the different labels, many of whom bore the name ‘King Oscar’, which I thought was apt. Tuesday happens to be one of the days that they smoke herrings in the museum, so Howard sampled a couple. He also had a go at canning them – turns out he has missed his vocation! He also insisted on purchasing a new hat in the museum shop, prompted by the awful rain outside. So, it’s goodbye ‘Corky’, and hello Mr. Bright Blue Sowester (yet to be given a name!)

Our ticket to this museum, we were then told, entitled us to admission to the other three Stavanger Museums. We hadn’t really planned on any more museums, but just along the road was the Maritime Museum, so we popped in briefly. In the entrance stood an old World War 2 mine. It made me smile as I thought of my Dad. After the war, when he left the navy, he signed up to ‘The Minewatchers’, a group of volunteers, who watched out for mines left over from the war, floating down the Thames. So every Saturday morning, he disappeared off to ‘Minewatchers’! Of course, he never saw one, and clearly it was, for him at least, a chance to meet up with his old navy buddies. I think it was somewhere near Hammersmith Bridge, since once a year he took me along to the Minewatchers hut on the river, to watch the Oxford and Cambridge boat-race from a great vantage point. Upstairs, there were yet more sardine labels on display, this time from the war period. Being neutral in the First World War, the Norwegian canners cleverly adapted their labels according to their market, allowing them to sell to all sides. So there were ‘Kaiser’ labels, ‘Victorious Navy’ labels, as well as a ‘Brittania’ brand for the British market.

We then had a walk around Old Stavanger, known as Gamle Stavanger, with it’s pretty cobbled streets lined with white clapboard houses, many with beautiful floral window-boxes. On the way back to Oscar, we inadvertently wandered into the old Hippy district of Stagen, much quieter than Gamle (the cruise visitors hadn’t ventured this far), but still with beautiful white weather-boarded houses, some with some interesting graffiti.

We then continued on our way, leaving Stavanger by car ferry across the water to Tau, and headed for our campsite at the entrance to Lysefjord. As we drove here, the rain fell in stair-rods, but thankfully it has eased this evening. At least two locals told us today that he have missed the Norwegian summer. Apparently the weather was in the 30s just two weeks ago, the hottest for 47 years, but now we are back to the frequent rain that this part of the coast is renowned for. Nevertheless, we will try and make the most of it. Hopefully tomorrow the mist will clear enough for us to see something of this wonderful fjord.

In the meantime, Howard is causing quite a stir on the campsite with his new headgear!

One thought on “Day 160 Stavanger to Forsand, Rogaland, Norway.”