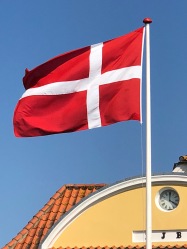 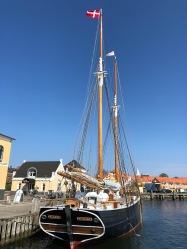 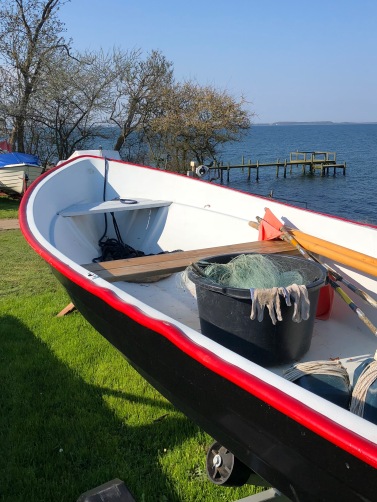 The drive yesterday was our longest to date. Originally we had planned to stop off in Berlin, and possibly Hamburg. As it turned out, we made a good call to bypass these cities, since being May Day or Labour Day as it is sometimes termed, we saw reported today on the German news that there had been demonstrations and protests in both. Having previously been caught up in protests in both Barcelona and Rome, I have had my fill of riot police, and had no desire to experience the German version.

The journey was made slightly more tolerable by the fact that there were no lorries on the roads. Every motorway services that we passed, we saw line after line of huge juggernauts queued up, resting for the day. As we moved up into northern Germany, the landscape changed, becoming less forested, but with wide open fields. All along the route we saw evidence of Germany’s enthusiasm for renewable energy, with many wind and solar farms dotting the horizon. Howard continued to comment on the neatness of the German’s woodpiles. I think he had woodpile envy! It also appears that we have been following the blossom – from the fields of almond blossom in Spain, Portugal and Italy, to cherry and lilac blossom in Croatia, Slovenia and the Czech Republic, to hawthorn blossom in Germany, and now here in Denmark.

Last night we stayed in the very pleasant northern German town of Neumunster. It had a very clean, relaxed air about the town. The people we came across were incredibly friendly and helpful, and contrary to my preconception of the Germanic race, were remarkably good humoured.

This morning, before leaving, both Howard and I needed attention to our glasses. We walked into an optician, who very efficiently mended both pairs for us, and then charged us the princely sum of 2 euros. I almost had to stop Howard from questioning the price, for fear that they would quadruple it.

We then headed due northwards towards Denmark. The landscape was flat and open. As we approached Flensburg near the border, the light perceptively changed. The skies became wide and a translucent blue, having the feel of the light that you experience in the Fens or East Anglia. Just after the border, the Danish border police were doing random vehicle checks. They took one look at the mess inside Oscar, and just waved us on, rolling their eyes.

We drove a third of the way up through Jutland, then hung a right, and headed east across the Little Belt’s Bridge into Funan, the middle of Denmark’s three main islands. Shortly after crossing into Funan, we spied a sign for Middelfart. Howard mused as to whom would want to twin with such a town, recalling that the little Highland Perthshire town of Dull is twinned with Boring, in the USA. I won’t repeat his suggestions – but I was pleased to see that he is now putting his considerable intellect over to such important considerations! We passed by Odense, the home of Hans Christian Anderson, and drove to the easterly coast of Funan, to a charming town called Nyborg (which translates to Newcastle in English). Apart from being situated by the sea though, that is as far as resemblances go. It has a small picturesque harbour, several attractive churches, and a bright and airy pedestrian area. After picking up some Danish Krona, we stopped for coffee at a lovely little cafe, that also sold the most impressive selection of gin. The lady explained that Nyborg is a bit of a gin buff’s paradise, having it’s own distillery down at the harbour. In addition, several other small batch gins are made locally. We settled on a bottle that amongst it’s botanicals included seaweed and saltwort – a little similar to the Harris Gin, that also uses coastal ingredients.

We then headed on to our campsite, situated on the coast close to Nyborg. Our pitch is huge and grassy, and looks out over the sea towards the 18km Great Belt’s Bridge, that links Funan to Zealand. The countryside around us is green and arable, with plenty of cycle paths and coastal paths. We have decided to stay here an extra day to recover from  our long drive. First impressions of Denmark are hugely positive, although sadly the shorts and sandals are now packed away, and we’re back in our padded jackets. It may be sunny, but it’s bitterly cold – I suspect we may have experienced the last of the warmth for some time! Just as we were getting used to it, too!