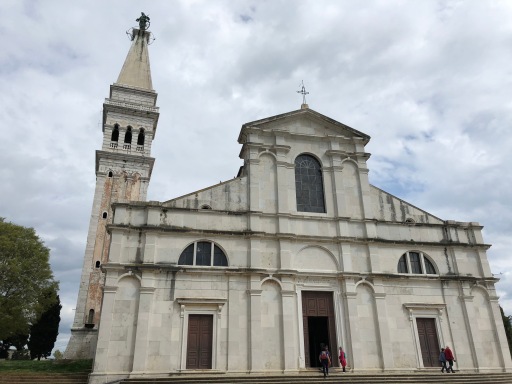 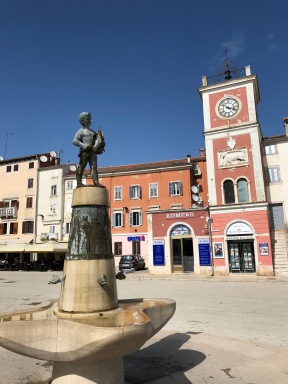 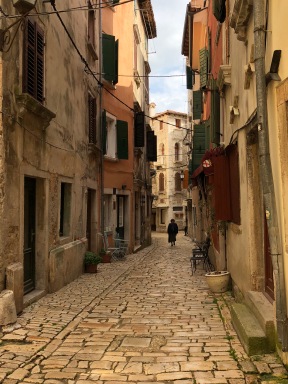 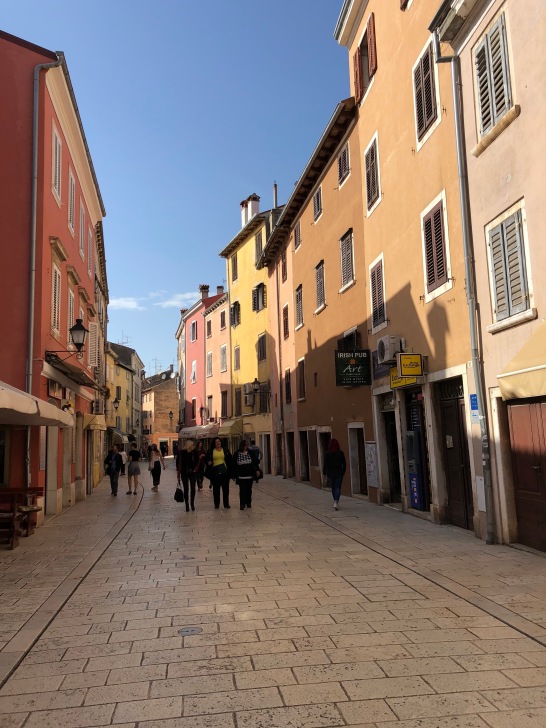 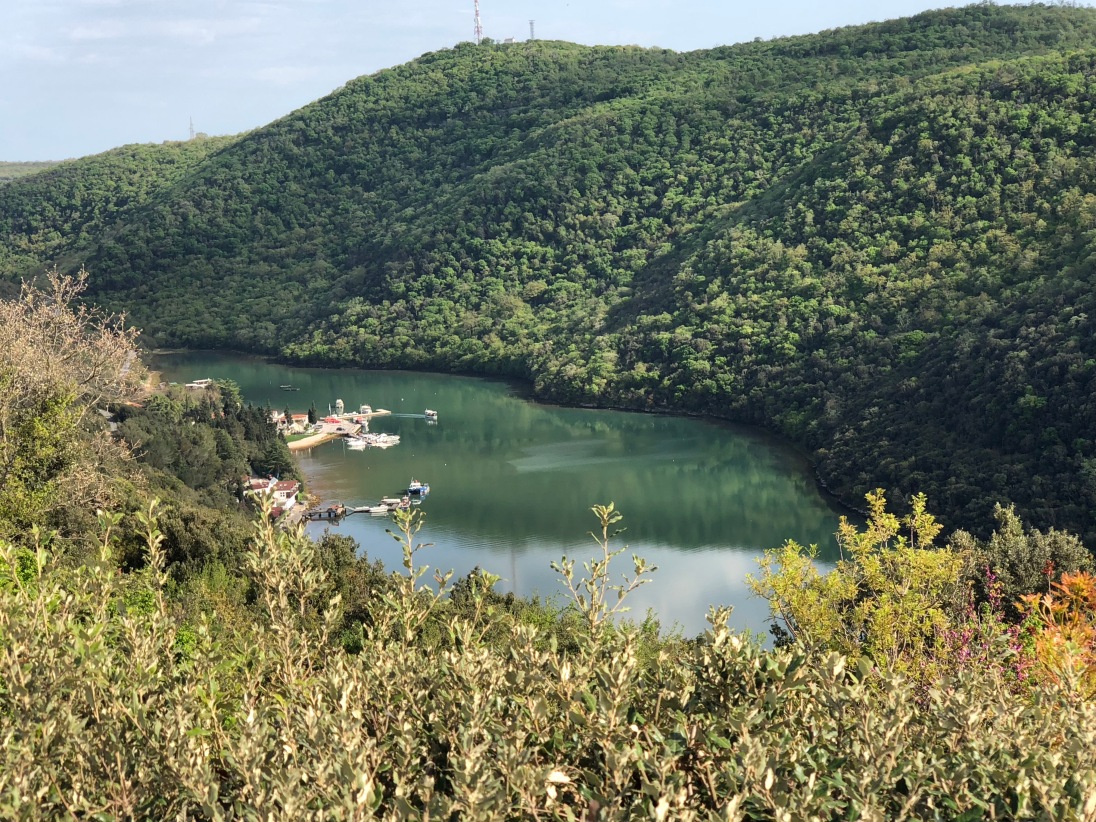 So today with heavy hearts, we bade farewell to our lovely campsite on Cres. We had contemplated staying longer, but in the end decided it was ‘better to leave wanting more’, to quote Howard. It is certainly somewhere that we will return some time in the future.

Last night we had a last meal at the lovely pizzeria looking out over the water. Howard decided to have something other than pizza to eat, and the proprietor recommended ‘Cevapcici’ – a local Croatian speciality. Howard thought he would be smart and use an App that Edward had shown us, where you just point your phone at the words, and it automatically translates the words into English. So he duly pointed his phone at the menu card, and what should pop up, but ‘puppies’! Undeterred, Howard decided to try the local dish. It turned out to be some sort of kebab, which was actually very tasty, but made from lamb rather than anything canine.

This morning, Howard had a final run along to Cres town. He came back very chipper – it was apparently his fastest time for 5km this trip, and so his Garmin had given him an award. Talk about obsessional! We packed away at a fairly leisurely pace, thinking the ferry time was midday, or possibly 12.30 (quote Howard). Remarkably, our little yellow plastic number disc turned up in the packing – it had become wedged in the back of the frame of the picture of the children – so our 50 kuna was saved.

We checked out at 11am, and Howard casually asked the lady at reception the time of he next ferry. ’11.30’, she replied. Yikes! It was a fast drive to the ferry terminal, but remarkably we made it with five minutes to spare. Once on the ferry, having not had time for a drink, Howard purchased two cups of coffee, and carried them up onto the top deck where we were sat. He had not taken into account the breeze, once the ferry started moving. His Americano stayed reasonable intact, but as he handed me my white coffee – all the froth blew everywhere – all over my glasses, my face, and the next two rows of seats behind us. Thankfully there was no-one else up on deck at the time, otherwise they would have been caked in coffee foam. Howard initially looked shocked, but then couldn’t help let out a poorly stifled laugh. I spent the next five minutes cleaning two rows of seats. I’m sure the captain of the boat, whose observation deck was immediately above us, was puzzled as to what was going on.

Once ashore, we drove northwards into the part of Croatia known as Istria. It is the large bump that sticks out into the Adriatic, just below Slovenia and Italy. This part of Croatia has a huge Italian influence, partly due to it’s proximity, but also because at very times in it’s history, was under Venetian rule. We headed to the lovely medieval port of Rovinj.

The Old Town of Rovinj sits within an egg-snaped peninsular. The harbour is surrounded by elegant Venetian town houses and piazzas. The main street through the old town is a narrow pedestrianised walkway that passes through a baroque archway, then curves through the old town. From here, narrow cobbled alleyways lead upwards to the star attraction of Rovinj, the Church of St. Euphemia, presiding over the summit of the peninsular, and visible for miles. The church was built in the 18th century in a Baroque style, and its bell-tower is a massive 60 feet in height. It contains the remains of poor St. Euphemia, who was thrown to the lions in AD 304.

The cobbled alleyways leading up to the church are made of polished limestone cobbles, and unfortunately, just as we arrived in Rovinj it started to rain. This makes the said cobbles extremely slippery. So Howard and I slipped and slided our way up to the church. As we arrived at the square in front of the huge white church a large group of students had gathered on the steps, and for one awful moment, I thought that they were going to ask Howard to take their photo. ‘Not again’ I thought to myself. But thankfully someone else obliged, saving the school party from the inevitable headless group photograph.

Once inside the church, we spotted the sign for visiting the bell-tower, and naively opted to do the climb. I should say at this point, that we had not researched this visit, and so had failed to clock that this was indeed a very tall bell tower. Neither did we realise that the climb upwards consisted of a wobbly staircase of partially rotten and slanting wooden slats, extremely narrow (much narrower than our feet), and with large gaps between the treads, so that as you ascended, you were able to see the floor below at all times! A lady in front of us tentatively managed the first two flights, and then started shaking, and gave up. Howard and I pressed onwards, but the final flight was just like climbing a ladder, and by the time reached the top, my legs were quivering. I’m not generally a great advocate of over-jealous health and safety, but I’m quite sure that no-one would be allowed up a staircase like this in the UK.

However, once at the top, the views were stupendous, and well worth the terrifying climb. We re-traced our steps, slip-sliding back down the cobbles. I did think that anyone watching us would have wondered what a pair of old codgers we looked, but believe me, wet limestone cobbles are very slippy indeed!

After a coffee, the sun came out, and we had a quick skirt around the harbour, before heading back to Oscar. We then wound our way to our campsite for the night, passing the Limska Draga Fjord – a 10km long inlet formed when the Istrian coast sank in the last Ice Age. We stopped at a viewpoint, where vendors selling their wares had cleverly constructed viewing towers for tourists to get a better view of the fjord. The deal, of course, was that you then purchased something from their stalls. Howard needed very little persuasion to purchase some ‘Mistletoe and Honey Grappa’. I had a quick sip and it nearly burned the back of my throat, but Howard seemed pleasantly satisfied with his litre bottle!

The campsite where we are staying had rave reviews, but rather unfairly, we arrived and instantly compared it to Cres. The washrooms indeed are hotel quality, but as Kirsty and Phil would say – ‘Location, Location, Location’! It sits nearly a kilometre from the beach, and is a bit like a glorified holiday park, not yet open for the season. We will only stay one night, before moving on to Slovenia. The WiFi and 4G reception are also rubbish, such that I can’t even download photos to my computer at present.

Hopefully I can add some photos once Howard manages to master his ‘dongle’!