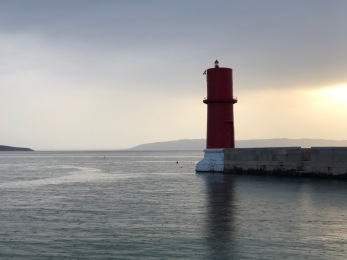 As forecast, it rained heavily overnight, and was also quite blustery. As a precaution, we took down the awning and put away the table and chairs. We prevaricated as to whether to move Oscar to a more sheltered spot, but in the end decided to stay put. As it turned out, the wind wasn’t too much of an issue, but it did rain steadily most of the night, and without the external topper on, it sounded incredibly loud when lying upstairs.

This morning proved brighter, although still overcast. After breakfast, we de-camped to the lighthouse cafe with maps in hand for coffee and planning. Needless to say, little planning was done – we can’t decide on which route to take up through Europe. I think some of it will depend on which routes are open, since there is still plenty of snow around the Dolomites at this time of year.

After coffee, we got the bikes out and went for a lovely cycle ride, first along to the end of the peninsular, then back past the campsite and on into Cres town. We stopped at a little cafe in the square by the harbour, with the intention of having a light lunch. Being the only customers on this quiet Monday lunchtime was an error. First we had to try out the proprietors home made olive oil and home made bread, which, although delicious, frankly was a lunch in itself. Then came a huge plate of local cheeses. There was so much cheese on the plate, that Howard wrapped half of it up in his serviette, to save for later, and hid it in his cycle helmet. This was followed by a tuna salad for Howard (I’m guessing half a tuna by the size of it!), and grilled vegetables for me. Both plates were enormous, and although undoubtedly very healthy, by half way through we were completely full up. We decided to cycle home and have coffee at the lighthouse. But by the time I had returned from the restrooms – two complimentary slices of chocolate cake had appeared. We rolled off our seats and back onto our bicycles, Howard trying desperately hard not to let the proprietor see the bundle of cheese in his helmet. Out of sight, the cheese was transferred to his pocket, but I’m not sure how palatable it will be now – rather squashed I suspect!

Once back on sight, we tried to do some more planning, but the problem of where we are staying, is that there is an irresistible urge to stare out to sea and look for dolphins. It’s a hard life.

Tonight, we had promised ourselves a farewell pizza at the pizzeria just at the end of the campsite, where the friendly owner had already sold us a litre of his own home-made olive oil. It is indeed splendid olive oil (Cres is famous for a delicately flavoured cold press olive oil) – but since we had already bought some from the Sierra da Estrela campsite in Portugal, some from the Agrituristico camping in Puglia, and some from Sicily, we are indeed starting an olive oil lake of our own. I suspect we will have to disappoint our pizzeria friend, and only order one pizza to share, otherwise our waistlines will expand even more than they have done already.

We still don’t know where we’re going tomorrow. At this rate, we’ll still be here!

The lighthouse photos were taken last night in the rain. Just goes to show how beautiful this place is, even in inclement weather.