This morning we bade a fond farewell to our splendid hosts, and set off on the long drive to Barcelona. We were feeling very refreshed after a couple of relaxing days, with all the home comforts, but this would be our longest drive by far to date, nearly 500 km (or just over 300 miles).
We opted to take the Viaroute del Mediterraneo, which is the toll motorway which runs the whole length of the Mediterranean to Barcelona and beyond. This proved to be a very different experience from our drive from Almeria to up beyond Alicante the few days previously, when we had passed kilometre after kilometre of unsightly plastic poly tunnels. The province of Valencia seems to take much more pride in it’s appearance. This part of the country is well kept, and picturesque. For nearly the first 200km of our drive, the motorway followed the thin coastal plain between the Mediterranean and the mountains. The azure blue sea was in sight on the right the majority of the way, and in most parts, there was only two or three miles width until the mountains started rising on our left. But what a picture! Along this entire stretch of the route are orange groves, all in fruit at this time of year – mile after mile after mile. We couldn’t believe that there was nearly 200km of orange groves – quite extraordinary. Then, as the coastal plain widened a little, we started seeing orchards of almond blossom, and the occasional lemon trees. We started to see strategically places forts on the hilltops overlooking the valleys, and the sporadic look-out post.
As we crossed over into Catalonia, from Valencia, the strangest thing occurred. Within yards, the orange groves stopped, and we now saw miles of olive groves, scattered intermittently with almond blossom. Just like the road surface had changed crossing from Portugal to Spain, so the crops changed in a flash! Further along, we saw more in the way of arable crops – cabbages we thought, maybe as the temperature became more temperate.
Not wishing to spend the entire day in the van, 100km from Barcelona we diverted off route to the town of Tarragona. I had read in one of my books that it is the second most important Roman site in Spain, and we were not disappointed. As we approached the waterfront we spied what we had come to see – a magnificent Roman amphitheatre, looking out over the Med. It was built in 2 AD by the Romans, who had been in the town since 1 BC. It was quite amazing to think that all those centuries ago, gladiators were fighting lions on this spot. We were also in luck, since apparently it was a public holiday, so the entrance fee had been waived for the day. Apparently there were several other Roman remains in the town, including a two-tiered aquaduct, but time was pressing on, so we continued on our journey to the outskirts of Barcelona. We arrived at our campsite on the beach just as the sun was setting, so took a quick walk along the shore to stretch our legs before putting Oscar to bed for the night. Tomorrow we plan to explore Barcelona, a city I have visited before with my god-daughter, but it will be a first for Howard. I think he will have no problem completing his step count after a day seeing the sights. Let’s hope he like Gaudi! Also, before anyone comments, 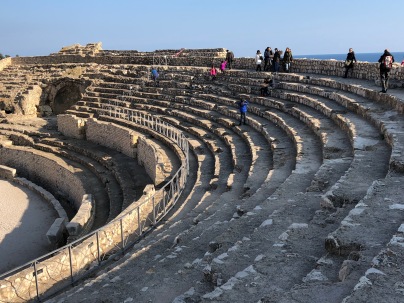 apologies for the selfie!

One thought on “Day 45 Cumbre de Sol, Benitachell to Barcelona”