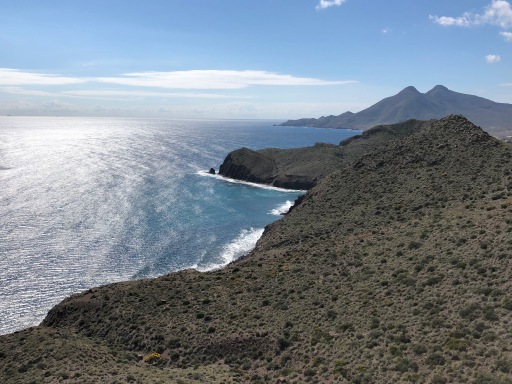 The campsite where we stayed last night was set in a National Park, near the coast at San Jose. Despite the ominous drive-in through miles of plastic polytunnels, once we got there it was a pleasant enough site, if a little large for our liking. The couple in the caravan /tent arrangement in the pitch next to us have been there every year for the past ten years, and have even had the same pitch in that time! They seemed perturbed that we were only staying one night and then moving on – we didn’t dare tell them that we were travelling for a year all over Europe – it might have brought them out in hives.
It rained heavily overnight, with some thunder and lightning, but the sun was shining when we woke up. Howard went for a run, whilst I had a strange dream that I was a maharena living in a grand palace, but then woke up and found myself upstairs in Oscar! Something Freudian there, no doubt.
After drying out the topper and showering, we set off the short distance to the coast at Isleta de Moro, a charming little fishing village in the National Park. The scenery driving the few miles was quite dramatic, with volcanic mountains rising from the dry scrubland of the coast. Ridiculously, Boris our satnav tried to send us half a mile out to sea – apparently it was only going to take us 14 minutes, so I guess he had a boat in mind, rather than swimming! We both shouted at him simultaneously, and turned him off rather abruptly. We had our late breakfast in a cafe by the shore, listening to the waves breaking on the beach, which was very pleasant. We then walked up to the Mirador, or viewpoint, that looked back along the coast. The sun was glistening on the water, and the Med was looking very appealing this morning. Reluctantly, we dragged ourselves away, and set off on our long journey east, past Murcia and Alicante, to meet up with our old friend Liz and her husband, who own a holiday apartment here in Spain.
I have known Liz since we were three years old, since we went to Mrs. Heinneman’s Nursery School together all that that time ago. It must have been 1961. Even more bizarrely, Howard went to the same nursery school, but I can honestly say that neither of us remember him there – I guess he had probably left before we started there. We then went on to primary school together, and were the only two girls from our primary to go on to Sutton High, our secondary school. So every morning, we caught the 213A bus and took the 40 minute bus journey to Sutton together. In our teenage years, Liz was a huge Marc Bolan fan, whereas my affections were more directed towards David Cassidy, which is testament to her superior taste. We have stayed in touch over the years, and she was one of the witnesses at our wedding.
I can honestly say that Liz is partially responsible for our current trip. At primary school, when I was taken off on holidays with my parents to Margate or Folkestone in our grey Wolesey, Liz was leading a much more exotic lifestyle. Her parents owned a bright pink  Camper van, and every summer holidays, since her parents were both teachers, they packed their van up and headed off around Europe. I was dead jealous – so much more exciting than my dull trips to the South Coast! So, in some way, I think that planted a seed in my mind, and is the reason I have always lusted after a camper van.
I never really expected to find myself nearly sixty years later travelling around Europe with Howard, but here we are. And today, the Three Amigos from Mrs. Heinneman’s will be meeting up again!
I finish with a sunset view from Liz’s balcony.