It was a frosty start this morning in our olive grove, despite the sunshine. Taking a shower with an air temperature of 2 degrees involved some degree of stoicism, despite the hot water. Howard noted that the swimming pool on the site had frozen over.
We ate the last of our Scottish porridge for breakfast, then packed up Oscar. We bade a fond farewell to our hosts, and felt quite sad to be leaving such a wonderful location. The first part of our drive involved meandering through the Estrela National Park, the highest in Portugal. We came across the charming town of Gouveia, which had the traditional tile name plaques of itself, and also all the little villages in it’s environs on a long wall at the top of the town. It was then a slow drive on to Coimbra, an ancient city renowned for it’s university. The university buildings certainly dominated the city, standing high on the hill. Students thronged the squares and cafes, some of them dressed in their black gowns. It reminded us a little of St. Andrews, where students take great pride in wearing their red gowns around town. We had a coffee in the large central plaza, then had a quick wander through the Botanic Gardens. We were amused by eight male gardeners who stood gesticulating and bickering very loudly by a pond. It seemed they were arguing as to whom should pull the plug to drain it. One older fellow thrust his hand in, then yelped like a small child. We thought perhaps there was a snake in the water, but no – a younger guy just put his hand into the brackish water and pulled the bung. What a fuss over nothing!
We then headed on to our afternoon stop of the day, an absolutely charming old Moorish town called Obidos. It sits on a hill, and is surrounded by the old walls, and just outside the periphery runs an impressive aqueduct which remains intact to this day. We wandered through the tall stone archway into the old town, and Howard was keen to take a walk along the old city walls. I blindly followed, but rapidly realised that health and safety is not something the Portuguese seem to care for. The walkways were narrow, very cobbled and uneven, and there was absolutely nothing to prevent you falling a hundred feet or so off the other side. Although the views of the town, with it’s old castle and churches was spectacular in the bright sunshine, I began to feel increasingly uneasy about our afternoon walk. The walkway then abruptly came to an end, our way barred by a wooden barricade, and the only escape was down a ridiculously steep set of stairs carved in the rock, which for the last twenty feet petered out completely, leaving you to rock climb down to the path. After that piece of excitement, I insisted on another cafe stop to calm my nerves, looking out over the colourful yellow and blue painted houses. Walking down the narrow main street, there were several old bookshops, and apparently the town has started hosting a yearly literary festival. So despite my protestations at the time, I must say that Obidos was an absolutely charming town, and well worth the visit.
By now, time was getting on, so we hit the motorway for the last sprint down to the coast. We have settled on a site not far from Lisbon, and will stay here a couple of days, perhaps do some cycling, and possibly visit some other sites before hitting the capital itself. Howard is getting the evening off cooking tonight, and we plan to eat in the campsite restaurant. Hopefully their menu will match his increasingly high standard of cuisine! 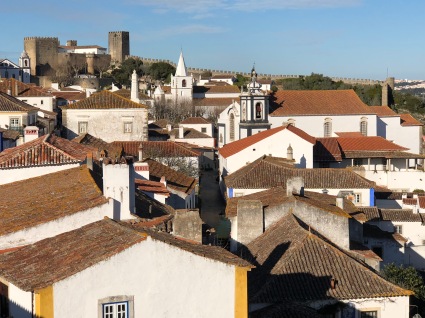 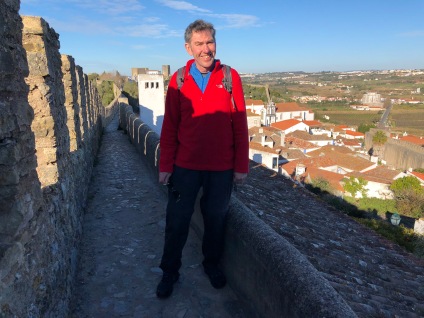 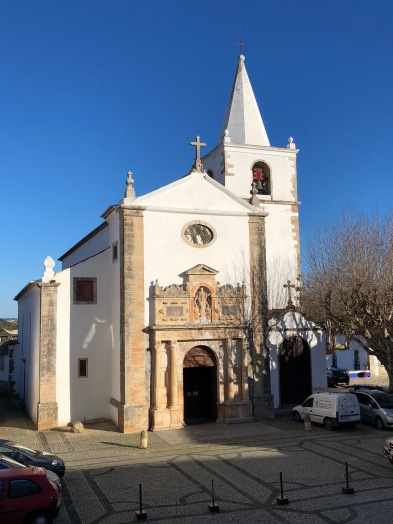