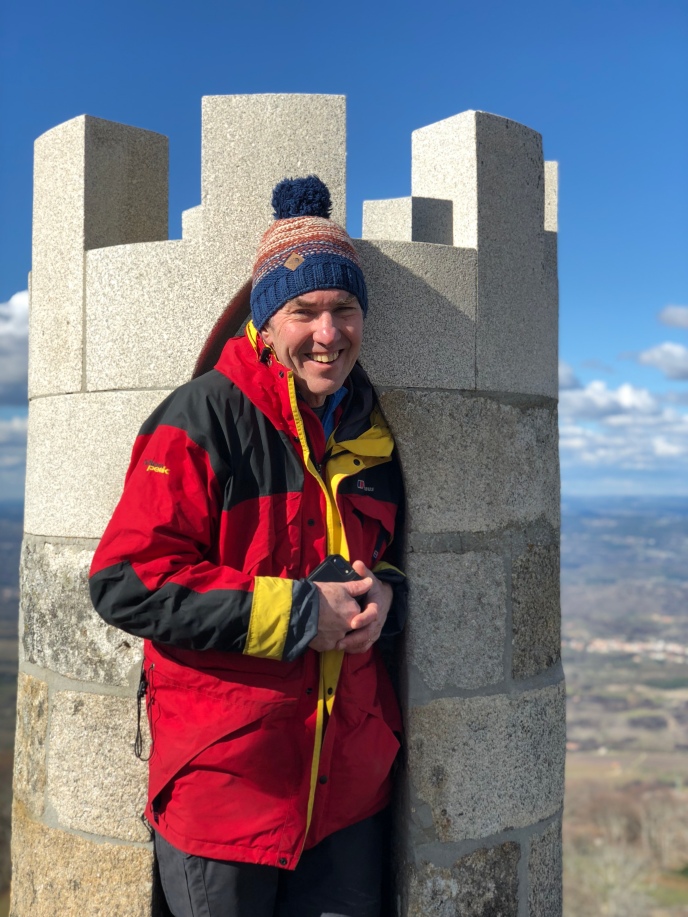 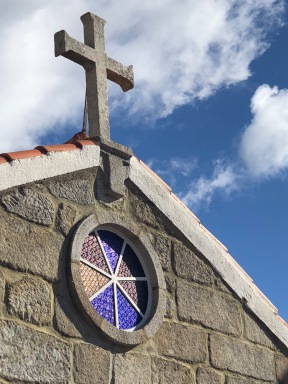 This place is a gem. Authentic rural Portugal – just our sort of place. We woke up to birdsong and sunshine, although it had been bitterly cold overnight, due to the high altitude and clear skies. The owners had kindly left out for us six freshly laid eggs from their hens. After breakfast we chatted with the lady in reception, who told us that the German campers who had been here earlier in the week had left because it was too cold for them. We explained that we came from Scotland, and that it was positively balmy. We purchased some of her home pressed olive oil, although sadly could only fit the smallest bottle into our camper van cupboard.
We then donned our walking boots and set off for our trek. The first part of the walk was very pleasant, through a little village called Melo. Apparently a famous Portuguese poet had lived here, and here was a literary trail around the places in the village that had featured in his poems. We even stopped and had a quick coffee in the sunshine, admiring the view over the National Park. It was a very picturesque place, with little cobbled lanes and pretty white-washed houses. The street names were marked by beautiful ceramic plaques in similar colours to many of the tiles we had seen. The next part of the walk was rather more strenuous – it was a bit like Portugese munro-bagging! I was duped into thinking it was a short walk to the next village – but hadn’t appreciated that we were heading for a medieval hill village, that was up a very steep and never ending hill. It took us a good couple of hours to walk the few miles uphill to Folgosinho. As we walked, we passed olive groves planted on the hillside terraces, and noted that in many areas there had been fairly recent forest fires, scorching the shrubs and trees. Although it was bright, there was still a definite chill in the air, and for the first part of the walk, we wore gloves and scarves. Bit by bit, however, I slowly peeled off layers of clothes, as I got warmer and warmer with the constant uphill climb. At one point, in the very far distance, I spied a hill town with terracotta roofs and a tall tower at it’s peak. I hoped against hope that this wasn’t where we were heading. But of course, it was! Eventually, I puffed and panted my way up through the stunning quartz cobbled streets, past the old church and the fountain, and up to the tower. I must say that the views were absolutely sublime, but it took me several minutes of catching my breath to really appreciate them.
We found a tiny cafe /bar as we walked back through the village. Initially it looked closed, but then we heard voices. It turned out to be a charming little place – and to my delight, lined up on their shelves was a bottle of Hendrick’s gin. As tempted as I was, I decided that it was still too early in the day, and we also had the long walk back to the campsite. However, I immediately warmed to a place, that in the middle of seemingly nowhere, was stocking one of my favourite tipples.
We route-marched back to Oscar, virtually all downhill thankfully, and Howard is quite delighted to have exceeded his silly step count by nearly ten thousand. We are now sat collapsed, drinking tea, and planning our next few days. We will probably head south, towards the coast again, where it is looking much warmer. In the meantime, I think we will be having Portugese omelette for tea.