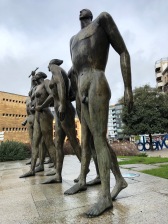 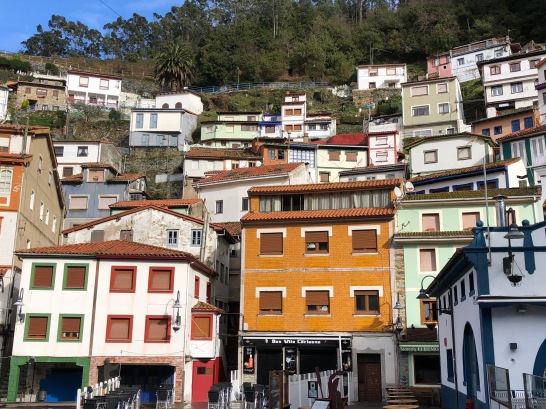 What a difference a day makes! Yesterday we had clear blue skies and sunshine – today rain, and lots of it. Just as we were walking back from the campsite restaurant last night, the rain started. It got heavier and heavier as the night went on, and by morning it looked set in for the day. This was our first really wet morning camping in the van, and it made for a very difficult de-camp – with the external topper and screen covers completely saturated. In a small van our size, it is very difficult to keep things dry. Even the towels we use for showering, although lightweight travel towels, are very hard to dry in damp conditions. Such is the need to minimise the wetness, that I have taken to shaking like a dog after my morning shower, in order to reduce the amount of water soaking into my towel! Gone are the days of thick luxuriant John Lewis towels left to dry on a warm radiator.
Our original plan had been to explore the eastern regions of the Picos around Potes, but since they were forecasting 5-7cm of snow further east, we quickly altered course and headed west.
As we drove through the little Asturian villages, we noticed many odd little sheds on stone stilts sat beside many of the farmhouses. It turns out these are called Horreos, and they were originally built as granary stores, placed on stone pillars to prevent rats from infesting the grain. They were very distinct and added to the charm of this area. The rain persisted, and maybe encouraged by the pitter patter, I called in a comfort break. We headed to the city of Oviedo, founded in the 8th century, which turned out to be another gem.
It was still drizzling when we arrived, but after a stop for coffee and pastry, the sun broke through, and we had a very pleasant stroll around the old city, taking in the cathedral and the market. Oviedo is a university city, and is clearly very cultured – everywhere we walked there were bronze statues – some depicting famous patrons, some of local tradesfolk, and others depicting naked bodies. It was quite a delight to wander around the old town and take in the architecture and a profusion of male bronze buttocks!
Then, just as we got back to the van, the heavens opened again, and we drove off in biblical rain towards the coastal fishing village of Cudilerra. This is reputed to be one of the most picturesque coastal towns, with it’s quaint narrow lanes leading down to the harbour. Brightly coloured houses pepper the hillside, and there are charming little walks through the tiny passages around the harbour. On a clement day, I can imagine that this would be a magical place, but today the sea was wild, a wind had whipped up, and the waves lashing the harbour wall were monstrous. So wild, in fact, that a local gendarme came over to warn us not to stand too close to the harbour wall, for fear of being swept into the sea.
So on we travelled towards Santiago de Compostela, the cathedral city famed for housing the remains of St. James, and the final stop on the pilgrimage of Santiago de Carmina. Since the weather was so dire, which necessitated extra fast windscreen wipers for most of the journey, we opted to spend the night in a hotel, rather then battle the weather once more. After negotiating the local traffic, we eventually parked Oscar in an underground car park, found our hotel, and had a very pleasant meal in a local Tapas bar. Howard has just gone off to check on Oscar – we are feeling quite guilty about leaving him all alone tonight!