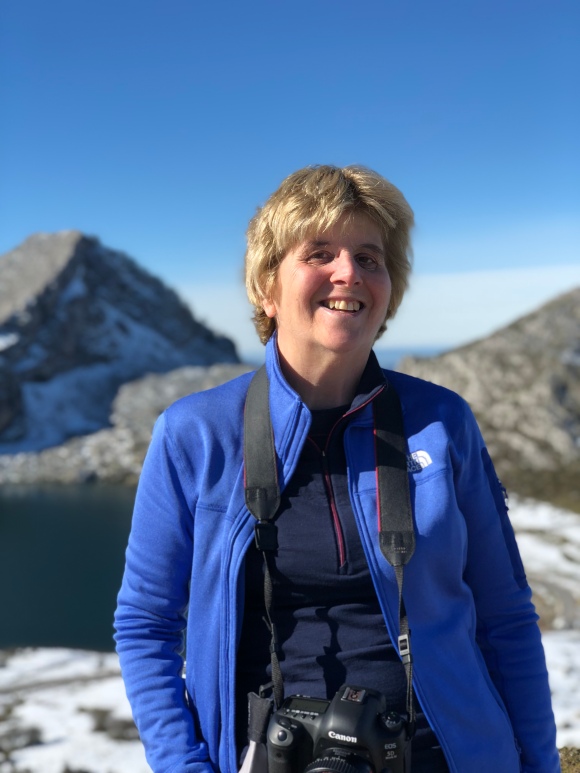 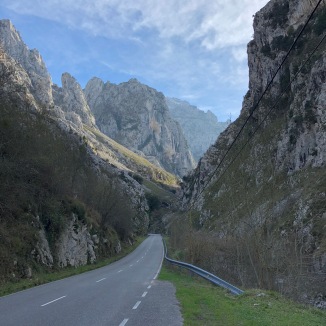 Another great day. Looking at the forecast, we realised that this was probably our only good opportunity to see the Picos in decent weather. Although it was a cold misty start, as the sun started to rise, the mist slowly began to lift to reveal flecks of blue in the sky.
Initially we headed west towards Covadonga, and then wound our way up along the steep twisting road towards the Lagos de Covadonga – two pristine alpine lakes set amongst the Picos mountains. In the summer months, tourists are restricted from driving this road after 8.30am, or before 8pm in the evening, and are forced to park at the bottom and catch a shuttle bus to the top. We quickly discovered why! The road was narrow with frequent hairpins, with precipitous drops down into the valley below. In places there were stone barriers to prevent you from tumbling into the ravine below, but these appeared rather random, and at some of the most treacherous hairpins, there was nothing at all. Maybe a trap for the tourists?
As we ascended, the views became stupendous – tall sharp craggy peaks, covered in glistening snow. It was hard to resist the temptation to stop driving, and jump out to take photos – but such was the concentration needed just to keep Oscar moving upwards, that we thought better of it, and only stopped at the designated miramars or viewpoints. As we continued on, the crystal blue Lago de Enol appeared – the water partially frozen, and sparkling in the now gleaming sun. Looking down back into the valley, there was a panorama of peaks, peeping out above the inversion of mist. It reminded me of a wonderful morning last winter in the Cairngorms taking photographs of Ptarmigan, when we climbed up to a corrie above Cairngorm, and saw a very similar sight.
After taking a wander around the first lake, we continued up to the second Lago de la Ercina. If anything, this was even more spectacular. The backdrop of snow peaked mountains was stunning, and we virtually had the place to ourselves. After walking to the viewpoint above the lake, we went back to Oscar, and had our morning coffee looking out over this splendid vista.
By now, time was racing on, so we turned tail and headed east to Arena de Cabrales, and on to the Cares Gorge. The road once more was steep and winding as it twisted up between the towering limestone cliffs on either side. The scenery just got more and more awesome, as more and more snowy peaks came into sight. We continued on up to Sotres, a tiny mountain which is famed as the highest and most remote in the Picos.
Coming down we saw several of the wild goats which frequent the gorge. We then came across a herd of cows walking up the pass, presumably heading home to be milked. We had little option but to sit and wait for them to pass, and I must admit to feeling slightly apprehensive as the large beasts scraped past Oscar. We failed, however, to see any of the brown bears which are apparently making a comeback to this area.
Back at the campsite, we have now been joined by two other vehicles – a red VW from Pennicuik, and a big white from Dunkeld. It seems only the Scots venture into the Picos in winter! The couple from Pennicuik are uber fit – they rock climb and cycle, and the couple from Dunkeld are motorcyclists (their bikes being in a trailer behind their van). Tonight, we plan to eat in the campsite restaurant. Last night we were the only ones there, but the guy lit a massive roaring fire for us, and phoned up the chef, who duly arrived, and cooked us splendid meals of salmon and steak. When the bill came, including a rather nice bottle of wine, it came to 19 euros. Can’t complain!