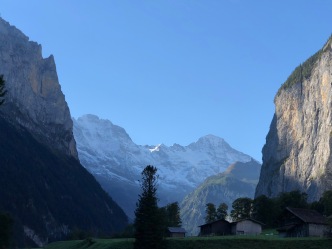 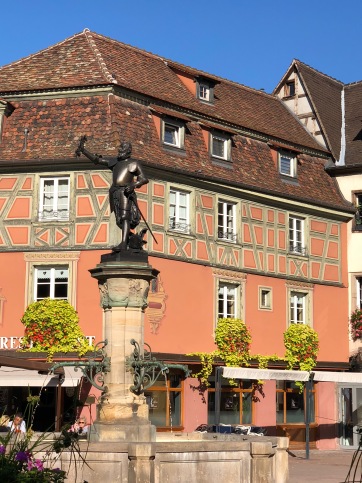 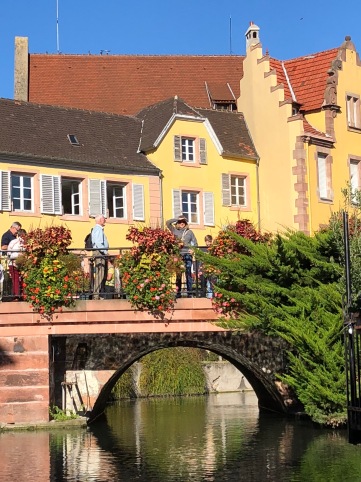 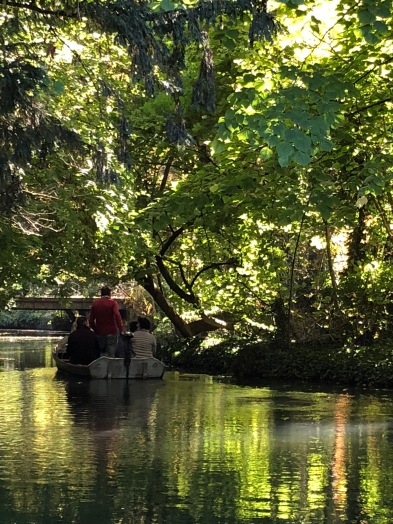 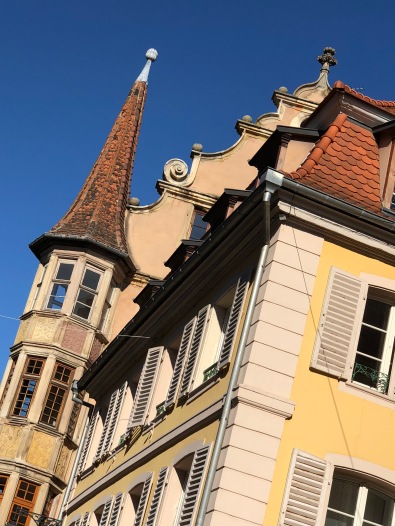 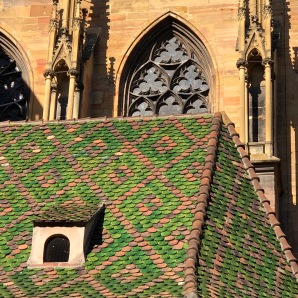 Today, we left our lovely campsite in the Jungfrau, and moved further northwards, back into France. The drive initially was through the glorious Jungfrau valley, but quickly we were onto motorways, and the driving became tedious.

We plodded on, shortly diverting into Germany, before arriving in the Alsace. Many of the place names had German sounding names, despite being back into France. Of course, as Howard pointed out, Alsace used to be part of Germany, prior to WW1.

We headed to the beautiful medieval town of Colmar, capital of the Alsace wine region. It was like stepping into a film set in the middle of the 15th century. The Old Town is a profusion of stunning medieval timbered buildings, painted in different hues of pastel pinks, ochre, blue and greens. Through the old town runs a canal, with low stone bridges, such that it has been named ‘petite Venise’. The cobbled streets lead to pretty squares, some with fountains and statues – all very elegant. Many of the streets are named after the tradesmen who used to work here. So there is La Rue de la Poissoinerie, (the street of fishmongers), the Rue des Boulangers (bakers) and the Rue Des Tanneurs (tanners, for those not familiar with French). There seemed to be a profusion of food shops, either charcuteries, selling the various meats and sausages, several chocolatiers, and some lovely cake shops.

We stopped in a square by one of the stone bridges, and had a late coffee and a bite to eat. Next to the restaurant was a small wooden jetty, from which half hour boat trips were departing from. I say boat, but they were really electrified punts, sitting incredibly low in the water. Howard and I can’t resist a boat trip, so we purchased our tickets, and spent a pleasant thirty minutes touring the canals. The only problem was our helmsman, a young, rather full of himself Frenchman, who took great delight in persistently rocking the boat, to scare the tourists. Once might have been amusing, but half an hour of this nauseous rocking became rather tedious. I suspect, that if the Koreans in the boat had stopped shrieking every time he did it, he would have soon stopped his antics. I wouldn’t have minded, but the life jackets were left sat on the bow – pretty useless if actually needed.

Boat trip completed, we had a wander around this stunning old town. The area around the Old Tanners quarter was especially picturesque, and the Cathedral made from a warm ochre stone, with some interesting green tiles on part of it’s roof, held centre stage.

Tour complete, we returned to Oscar, and headed to our campsite for the night. Howard had rejected the campsite nearest to town because of it’s poor reviews. Instead, we came about ten kilometres out of Colmar, to a campsite in the shadow of a hillside covered in vineyards. Sounds nice, I hear you say? Wrong. It is shite! Since we are only staying one night, the French receptionist has given us the smallest, noisiest pitch on the site. It is adjacent to a bend in the road, so cars rev and change down gear right by us, and we are looking out at a concrete wall. It is unquestionably the furthest pitch from the wash-blocks, at least a five minute walk (in fact, 5 minutes 30 seconds – I timed it). Personally, I would have moved site, but Howard is tired from driving, and uncharacteristically ‘didn’t want to cause a fuss’. Strange, since earlier today we was full of gusto, as he shouted at a Swiss driver who cut him up on the motorway, some combination of the words ‘arse, stick it up’ and ‘hole close over’, if my memory serves me correctly!

Tomorrow we will be leaving early, and hopefully we can find a more picturesque site to stay the night. I’m sure Alsace is beautiful, just not where we have ended up tonight. At least my anger at leaving the EU is being tempered a little, if this is the best the French can offer us!

Limited photos since – you guessed it – their WiFi doesn’t work either!