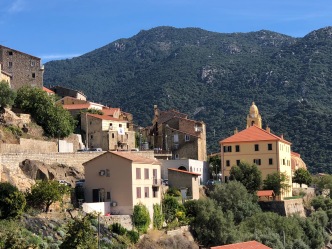 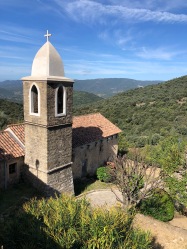 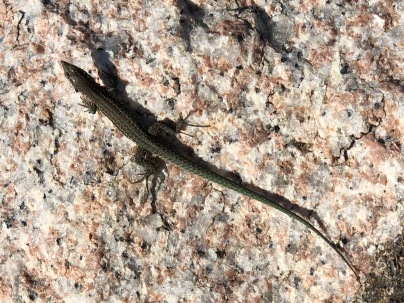 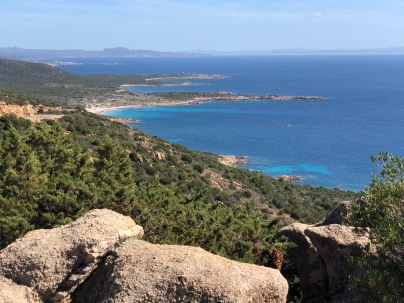 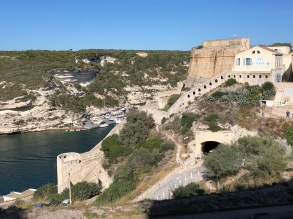 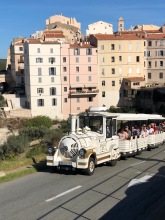 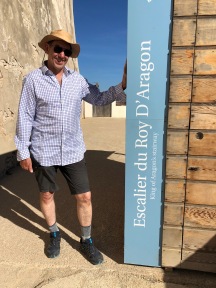 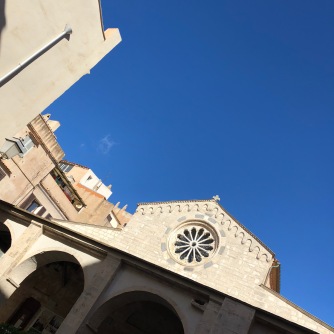 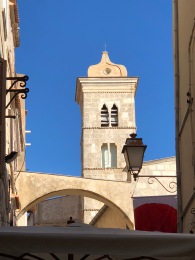 Eventually, our strange hooting noise faded into the night, but it must have been going strong for at least four hours before it stopped. We have been impressed with the birdlife in Corsica. Within thirty seconds of leaving our campsite this morning, we had spotted two red kites circling overhead. By the end of the day, we had spotted at least ten more. In fact, ridiculously, red kites and eagles have been the predominant birds here, much like robins and blackbirds in the UK!

After consulting our guide book, we decided to back-track a little way, and pay a visit to an ancient prehistoric site called Filitosa. The drive here, in itself, was spectacular, through gorgeous Corsican scenery, with barely another vehicle on the road – a stark contrast to yesterday. At one point we passed an olive grove, with strange coloured orange and green ‘baubles’ hanging from the tress. On closer inspection, I realised that it was balls of fine plastic netting, rolled into balls and hung below the branches. I am guessing that they lay the netting down, and shake the trees to collect the olives, but that is just surmising.

The site dates back to 1,800 BC, and is famed for it’s menhirs, or standing stones. Perhaps compared with Easter Island or even Callanish, on the Isle of Lewis, they are not quite so impressive, since they are smaller in size and fewer in numbers. Nevertheless, they still make a sight worth seeing. What is characteristic of these menhirs, is that they are anthropomorphic, resembling human forms, so it has been speculated that they may have been used to worship the dead. Some also have weapons engraved on them, thought to have been carved in times of war. In this way, the weapons were thought to provide a form of protection.

We wandered around the site for over an hour, taking in the quarry where they were carved, and a thousand year old olive tree, that formed the centrepiece of one of the arcs of stones. I think what I liked most about this place, is that it wasn’t heaving with people, like some of the attractions we have visited previously, and it was certainly very interesting to see.

After a quick lunch, we headed on our way southwards. Initially the road headed inland, before veering back down to the coast again. We drove through the pretty hillside town of Sartene. I stopped to take some photos whilst Howard filled Oscar up with diesel. In one of the photographs, I noted a line of washing, that was hung from a building at least fifty feet up, strung between two windows. It is still a mystery to me, how the person had managed to hang his or her washing up there. A real puzzle!

Once the road hit the southern coast, the views became sublime. At one point, we stopped at a viewpoint, and the water below us was the most vibrant turquoise that you can imagine, with the water as clear as crystal.

Eventually, we reached our destination for the day – Bonifacio. This stunning fortified city sits at the very southern tip of Corsica, sat high up on a rocky promontory, overlooking a fjord-like harbour. It’s massive ramparts dominate the skyline, and give the place a real wow factor. Sitting within the citadel is the Old Town, with it’s narrow streets and tall medieval buildings, perched precariously on the hill. Bonifacio was first developed in 828, and then for three centuries lived under the rule of Pisa. In 1195, it became a Genoese colony, and became a republic, able to mint it’s own money. It was at this time, that the impressive fortification took place. In 1553, it was conquered by the French, regained by the Genoese, before eventually coming under French control again in the 18th century. An influx of immigrants from Liguria early in it’s history, meant that Bonifacio developed a very definite Italian feel about the place, and many of the buildings would sit happily in any town in northern Italy.

We parked up by the picturesque harbour front, lined with cafes, and the marina full of expensive yachts. It was early afternoon when we arrived, and the heat was at it’s strongest. I tell you this, to explain what we did next. I am almost too ashamed to tell you, for fear of ridicule, but I suppose I should be honest. We decided that it was too hot to walk up the steep hill to the citadel, so for five euros, we caught the little tourist train. I know, I can hear you laughing from here, but we were short on time, and wanted to get there as soon as possible! Excuses over – it was quite fun!

We were joined on our row of seats by a mother and small daughter. The father and toddler son squeezed in the row in front. As the train started to move, Howard, in his enthusiasm, raised his right hand, and pretending to blow the train’s whistle, shouted quite loudly, ‘Toot! Toot!” (I should explain that having brought up three boys, train rides were part of our family tradition, and this is something he always did with them!) Well, the look on the little girl’s face was utterly priceless. It was a mixture of disgust and contempt, and she was probably only three years old. Clearly, a child who hadn’t been brought up to toot at trains!

Once in the ‘Haut Ville’, we had a wonderful couple of hours meandering around, taking in the atmosphere of the place. At one point, we came to a building just below one of the huge bastions. It turned out it was the local primary school, emblazoned with the French flag and the words ‘Liberte, Egalite, Fraternite’. We took a look in the cathedral, and walked around the seaward side of ramparts to look at the stunning white limestone cliffs, that run the length of the long concave bay beyond.

By now, time was marching on, so we walked – yes, walked, back down into the town, grabbed a quick coffee, and then headed back to Oscar. We had opted to drive a little way up the eastern coast to our campsite for the night. In this way, it puts us in a better position for our last full day in Corsica. Tomorrow, we hope to divert inland, to the mountain town of Corte on our way back to Bastia.

Our campsite tonight has the added bonus of a tumble drier, as well as washing machines. In need of some washing doing, we quickly put a couple of loads on. Howard then transferred them to the tumble drier, where they have now been for the past two and a half hours. Every five minutes or so, even though indicating that the drying has finished, the tumbler makes a couple of turns. Despite all Howard’s efforts to open the door, we cannot retrieve our washing. Sadly, this had happened before. In his impatience, Howard tugs at the door too early, which then seems to set in motion some sort of endless slow tumbling! I am moderately cross with him, but not as cross as he is with himself, since he realises that he is a repeat offender!

So whether or not we ever get away from this campsite in any good time tomorrow will depend on whether we can retrieve our washing. I am smiling as I type this, since Howard just left the van to check on progress, saying, ‘I’m not holding out much hope’. Nor am I!