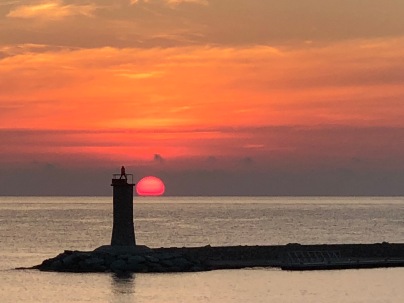 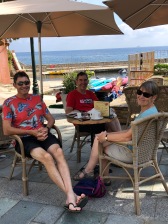 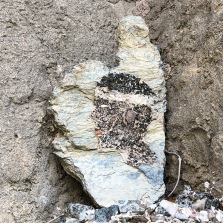 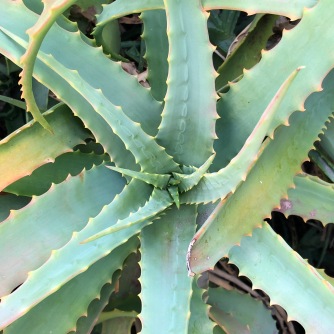 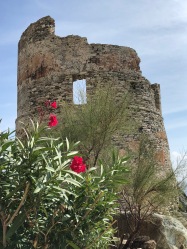 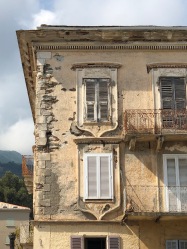 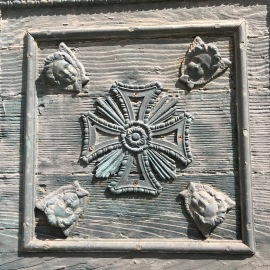 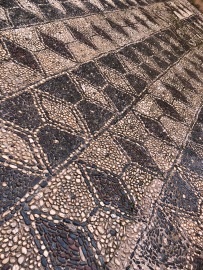 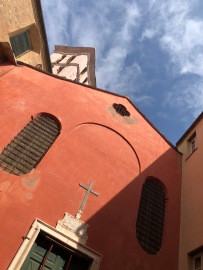 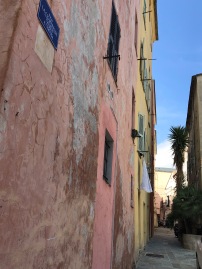 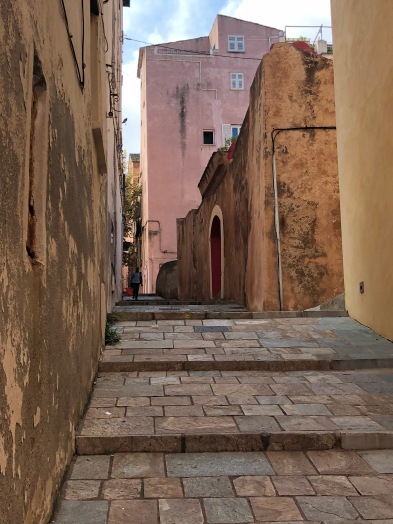 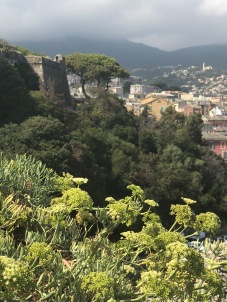 Another lovely day in Corsica. Howard awoke early, and summoned me out of bed to witness the beautiful sunrise over the bay from the balcony in the apartment where we were staying. Well worth the early wake up call!

After a leisurely breakfast in the sunshine, and another swim in the sea by Keith, we set off, continuing our drive down the eastern side of Cap Corse. The drops down from the wiggly road weren’t quite as dramatic as yesterday, but nonetheless, the scenery was still stunning. We took a few minutes to take another look at Macinaggio by daylight, having only seen it the night before in the darkness. It is a pretty harbour town, and apparently somewhere there is sited a plaque to mark the site where Napoleon landed, which sadly eluded us.

We continued on to the town of Erbalunga, which was divine. We found a shady square to have our morning coffee, and then went for a wander round. We passed by the Michelin starred restaurant ‘The Pirate’, perched right on the rocks, and perused the menu. We decided that lunch was probably not too bad for 42 euros, but decided that the 192 euro dinner menu was more than a little steep! We took the narrow path around the harbour front, and as we turned a corner, came to one of the watchtowers, standing proud looking out to sea.

We continued to dawdle our way around this picturesque town, taking in the pretty buildings and doing the inevitable photo stops. By now, the heat of the sun was starting to defeat us, so we decided that we had earned another stop for an ice-cream! I am watching the size of my waistline slowly stretch, as we fail to resist our ‘once a day’ ice-cream habit. It has replaced our morning pastry habit, which we eventually kicked about a month ago! Every country /town seems to have it’s own speciality cake, which is always offered at morning coffee. I suspect that by the end of this year, I won’t be able to face another pastry or look another ice-cream in the eye!!

The last part of our drive along Cap Corse led us back into Bastia. We parked up, and set off to explore the ‘Old Town’. It has a touch of the shabby-chic, but is utterly charming. Some of the buildings on the walk in, wouldn’t look out of place in Naples, multiple storeys with balconies crammed with plants and washing. We took a look at the lovely cathedral of St-Marie, and then at St. Clare’s Convent, latterly a prison. We did wonder though, if it wasn’t more of a prison when the poor nuns lived there. When they entered the order as young girls, they passed over the step engraved with Dante’s ‘Abandon hope all ye who enter here’, meaning that once they had gone into the convent, the young novices would never go from it.

We then came to a lovely walkway that looked out over Bastia Port. We sat having a cool drink, watching the ferries come and go, and also were intrigued by a massive sleek UK registered yacht, that had someone on a paddle board making their way round the outside cleaning the windows. En route back to the car, we stopped at a Corsican Delicatessen, and purchased some traditional cheeses and fig preserve. Not before the owner had insisted on us trying various cheeses, from a decidedly fly ridden plate, which would have sent Food Standards officers into orbit! As we were making our purchase, I had a small coughing fit. The wily shopkeeper offered me some Corsican lemon liqueur, which she claimed was good for coughs. It took little persuasion to encourage me to make another purchase of a small bottle! An excellent piece of salesmanship! We then drove a short distance along the sea front in Oscar, and enjoyed a lovely picnic of baguette, cheese and preserve, looking out over the sea – very pleasant.

We made our way to our hotel for the night, a short distance out of Bastia, closer to the airport, which we had thought would be convenient for Keith and Helen’s early morning flight out of Corsica. As it turns out, the taxi fares here are exorbitant, and so this was a false economy, but you live and learn. No matter. The hotel is fine, Keith has had another swim, and against all our better judgements, we ended up at the ‘Barbeque Party Night’. The food was actually pretty tasty, and the live music, which consisted of a vocalist and saxophonist / clarinetist was like a blast from the past. So we have spent our evening listening to Barry White, Simply Red, Phil Collins and the like – a bit corny, but I’m easily pleased! Howard even had a little shuffle.

We have had a lovely few days with Keith and Helen – they have been great company. I am not envious of their 6.15 am taxi pick up in the morning, or the cold and damp to which they are returning in Blighty. We said our goodbyes as we set off to bed. Ridiculously, having spent months on our own, with just ourselves for company, tomorrow we are meeting up with some other great friends, who are arriving on their motorbike! As my mother used to say, ‘You wait for a bus, and they all come along at once!’