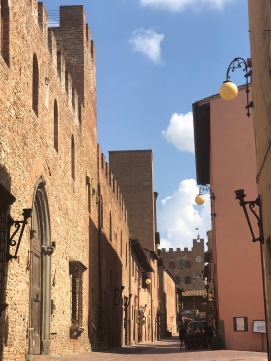 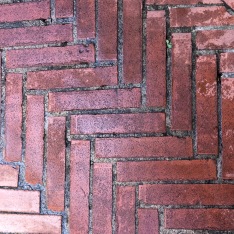 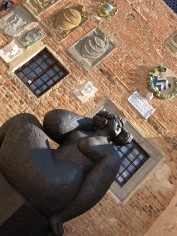 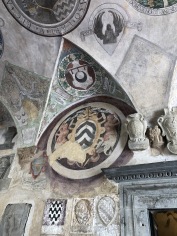 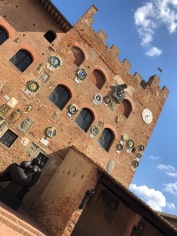 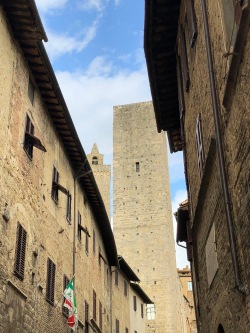 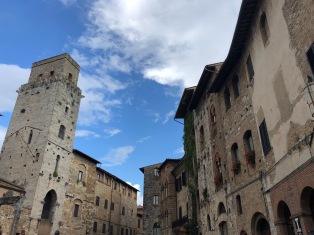 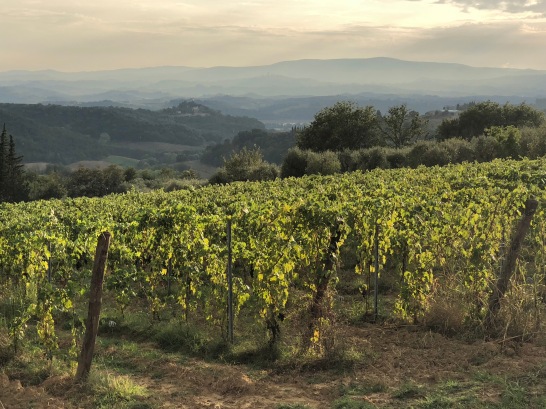 The draw of a wine-tasting evening at our lovely Tuscan campsite was too much of a temptation, and so we have ended up staying an extra night here.

This morning, though, we had to return to Certaldo to retrieve our two camping gas cylinders. The jolly shopkeeper immediately recognised us, and duly presented us with our Camping Gaz cylinders, now full, hopefully with Camping Gaz! It was one of the lovely old ironmongers shops, that sells a selection of almost everything – so we also picked up some more bungees to secure the bike cover, and crucially, some more insect repellent coils.

We decided to have our morning coffee back up in the Old Town of Certaldo, so caught another ride up on the funicular. The car park down below, unlike yesterday, was almost full, so we had expected the old medieval town to be busier. There were certainly a few more folk up there, but really not many, considering what a spectacular place it is.

After our coffee, we split up for half an hour, so that I could take photos at leisure, and Howard could walk around and get his step count up! Unfortunately, though, we seemed to be following very similar trajectories – and every time I tried a corner, there was this strange man in a cork hat! At the top of the town we came to the stunning Old Palace Pretorio, which now houses a museum, of sorts. I peered in through the entrance, and there seemed to be a sculpture exhibition being housed there also, so we decided to take a look. We were not disappointed. The building itself originates from the 15th century, and the walls are decorated with some impressive frescoes from that time. Howard took a look in some of the side rooms, housing ancient relics, whilst I amused myself looking at the sculptures, all by the same artist, and most depicting buxom women with large breasts, and considerably sized buttocks. Sounds ghastly, but in fact, I rather liked them. That was, until I caught sight of Howard trying to sneakily get a photo of me next to one of them without me noticing. Needless to say, it won’t be appearing in the blog!

After a little bit more of a wander, we made our way back to the funicular. The sign said it would be leaving in five minutes – so Howard couldn’t resist racing me down to the bottom – me on the train, and him on foot. Of course, he arrived first, and I was met by a rather smug looking breathless person at the bottom.

With most of the afternoon to spare, we decided to visit the hillside town of San Gimignano, famous for it’s many towers. We have both been here some years before, but since it was close, decided to pay it another visit. This walled medieval town can be seen for miles around, since it’s fourteen remaining towers stand out like Manhattan in the Tuscan countryside. In the 12th century, a way of demonstrating your wealth over your neighbour, it seems, was to build a bigger tower than them. So in order to flaunt their power and wealth the residents just kept building taller and taller towers. At one point there were a total of seventy two in the town, but today only fourteen remain. Of those left, you can still see the demarcation in the lines of brickwork, where more layers were added, to try to compete with the family next door. It sounds absurd, but that is exactly what they did. Unfortunately, in 1348, the plague wiped out much of the population, but the towers remained, and now are a magnet for tourists visiting Tuscany. The last time we visited it must have been out of season, since we were quite taken aback by quite how many tourists there were, in stark contrast to Certaldo. We fought our way up the main street, past the many tourist stalls, selling anything from leather goods, upmarket scarves, pottery, wine, local produce such as sausages and hams, and one shop even displaying boar’s heads – not for me.

We stopped for a quick drink in a cafe in the main square, and were bemused by the length of the queue for the gelato shop, nearly fifty people long. Extraordinary, since at that moment, loud claps of thunder were heard in the distance.

After our drink, we didn’t linger. It was too crowded for us, and in any case, we had much more pressing things to do. We drove back to our campsite, had as quick shower, and headed off to the campsite wine tasting evening. It seemed that most of the campsite residents without children were in attendance. We all sat at a long trestle table, and enjoyed several glasses of local Chianti wine from an award winning organic winery, before tucking in to a very tasty buffet. All in all, a rather convivial way to spend the evening. We are still trying to decide what to do tomorrow. No doubt it will be one of those ‘Which way is the wind blowing?” moments!

What is beyond doubt, though, is that I will sleep very well tonight. Our campsite gets top marks for entertainment. As I type, Howard is trying to decide which bottle of Chianti to buy – so many decisions!!!