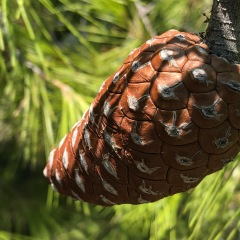 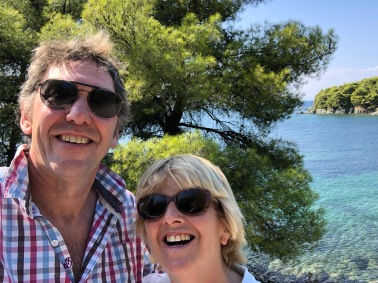 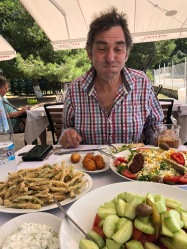 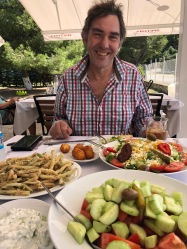 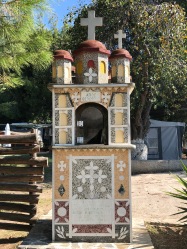 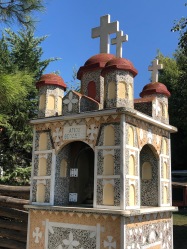 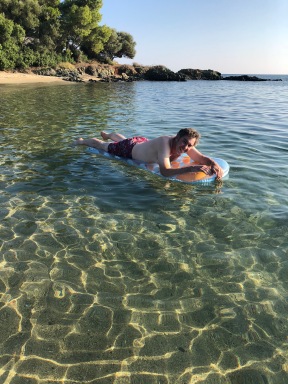 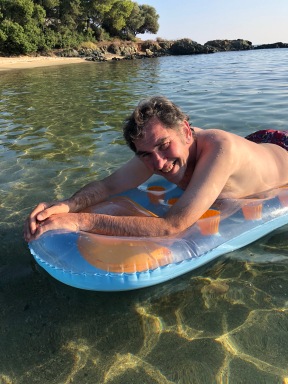 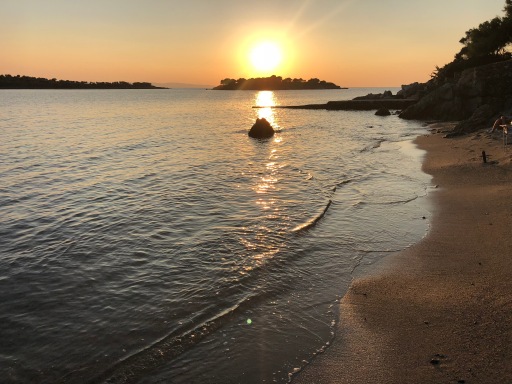 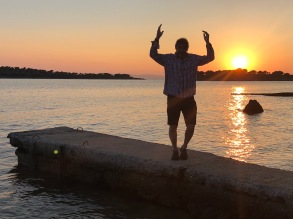 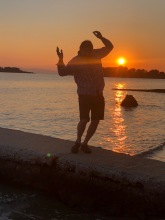 Well, contrary to our plans, we did indeed end up spending another day at this gorgeous campsite! In the end, we just couldn’t drag ourselves away from our gorgeous little private beach and prime pitch, especially since by last night, there were only two camper vans left at our end of the site, ourselves and the wonderfully quiet Austrian couple.

So it was another day doing very little really. Howard had his early morning run, and reported that in the early morning, the fragrant smell from the Oleander by the side of the road was divine. As yesterday, he arrived back in a sweaty heap, and immediately threw himself into the sea to cool down. After breakfast, we spent most of the morning trying to sort out the ‘dongle’ account. It has taken most of our trip to get it up and running. It was only when Oliver came out to meet us in Arctic Norway, armed with a new sim card, that we eventually got it to work. The dongle itself had followed us around Europe – first posted to Cordoba in Spain, then Sicily, then Croatia. The original sim, however, didn’t fit in the device, so Thomas was supposed to bring a new sim device out to Iceland. It never reached him, and so eventually, Oliver delivered it in Norway. Having got it operational, we had failed to realise that it didn’t cut out when we had overspent our data allowance, so we were confronted with quite a hefty bill from O2. Transferring the photos from my iPhone to the blog has proved very data heavy, but no matter – we have at last got it sorted.

So after a morning listening to very hip rap music on O2s ‘please hold’ answerphone, we decided that we needed a treat.

We set off in the midday sun to the next village, on foot. We had spotted a taverna on our drive into the campsite, that looked rather good. We were not disappointed. After a one and a half kilometre walk, we found ourselves at a little harbour, sitting in the shade, in a lovely little restaurant. All the other tables seemed to be filled with locals. Stupidly, we over-ordered. As well as tzatziki, cheese croquettes, fried zucchini and a tomato and cucumber salad, Howard also ordered the ‘house’ salad. To say that we were overfed on tomatoes, cucumbers and lettuce would be a complete understatement! Ten people could have eaten what we were presented with! It was all very tasty, but way too much.

We staggered back to our campsite, bloated from our overdose of fibre. To work off the excess food, we took to the water. By now, our lilo skills have improved considerably, and we spent a pleasant hour or two, splashing around in the lovely warm water.

I cannot describe in words how lovely this place is. At night, all we can hear is the rhythmic sound of waves, gently splashing on the shore, and the occasional cicada. The beach is small, but beautiful, and essentially, we have it all to ourselves, apart from the Austrians, and a German couple who arrived this morning. All the other campers use a larger beach around the headland – I’m not sure they even realise this beach is here! If we had to pick our ideal campsite, this would probably come pretty close. It is an experience you could only get from camping here. No-one else is allowed on the site.

The most special thing about this place are the sunsets. Every night, we have watched the blazing yellow sun slowly turn to orange, then red, as it slowly sets over the little island offshore. Last night, Howard celebrated the sunset with yet another rendition of his ‘Zorba the Greek’ dance. The locals looked on quizzically! The people who work here don’t realise how lucky they are. Sure, they have been through some difficult financial times, but to live and work in this environment, to me, is priceless.

We will leave here with very fond memories. All the staff are delightful, from the cleaning ladies, the gardener, the taverna waiter to the campsite owner. It has reinforced to us, that on this trip, it is the people that you meet that make the difference from a good stay to an excellent stay – and this has been one of the best. Hopefully, the rest of Greece can match it.