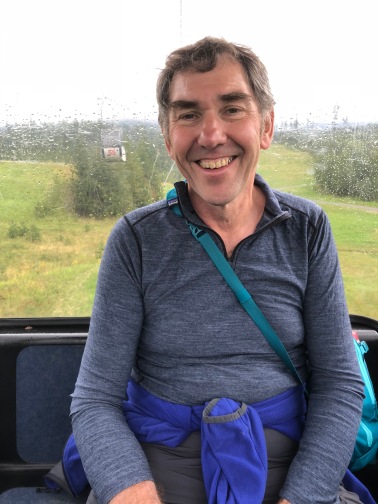 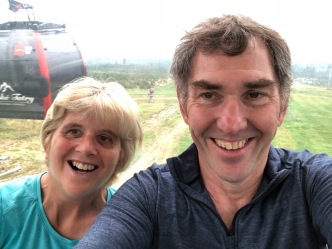 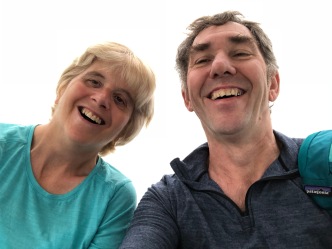 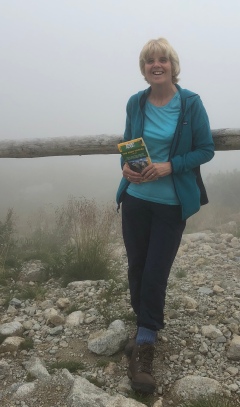 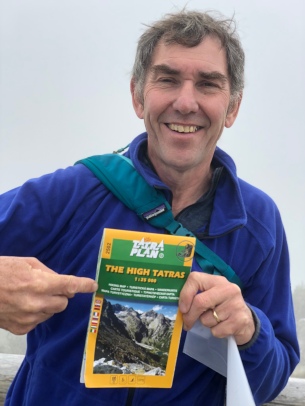 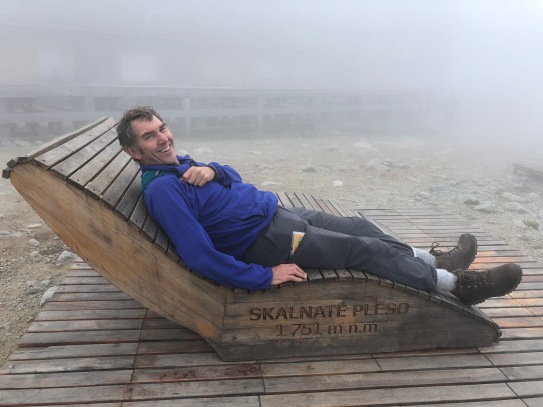 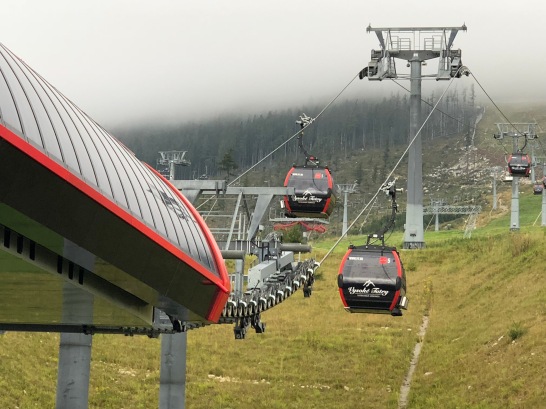 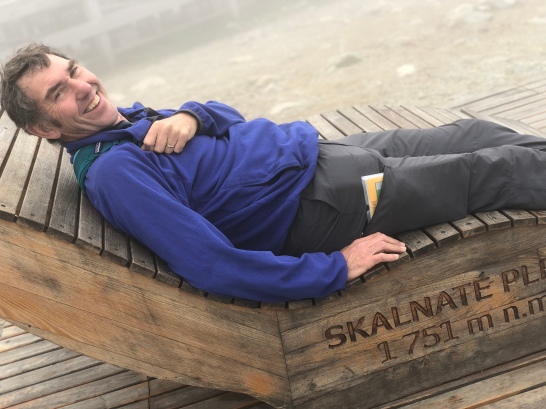 What a difference a day makes! Yesterday, we were struggling with the heat and humidity, but overnight, the weather broke, and now we are in cloud and mist. The evening had been balmy, but around 11pm, things started to change. A strong wind suddenly whipped up, and we saw flashes of lightening in the distance. Within half an hour, we were in the eye of the storm. Frankly, it was pretty scary. Howard and I quickly put the external topper on the roof, and disconnected the van from the electric supply. Howard tried to reassure me that motor vehicles act as a ‘Faraday cage’, transmitting any lightening strike straight to the ground. I, however, had my doubts. ‘What about the pop-up? That’s not all metal, it’s principally canvas and plastic’, I retorted.

We both simultaneously googled the VW California Forum, which is usually a mine of useful information. One sensible response advised to unplug from the mains, which we had already done. But other replies were frankly farcical. Among the less helpful responses were, and I quote, ‘drink more red wine’ and ‘try parking up next to a ‘Big White’ with it’s TV aerial up’. We had a quick look around our campsite, but for once, no Big White’s with huge white dishes in sight!

Our dilemma really was whether or not it was safe to sleep upstairs. In the end, we sat downstairs like scared little mice, until the worst of the storm passed. Howard braved it first, with me urging him not to touch the sides, for what good that would have done. Eventually the lightening abated, and I crept upstairs, but I must say, I slept with half an ear open for anymore thunder.

This morning, it was cold and damp, and the magnificent view of the mountains had completely gone. We decided we would do our planned walk whatever, but then, just before we were about to leave, the gas ran out. Howard went and asked the campsite owner if there was anywhere local we could refill it. He assured us the garage in the next village sold camping gas. So, we packed away everything in Oscar, took down the roof, and drove the few miles to the next village. It turned out to be the wrong type of gas, but the helpful garage owner assured us we could find it in the next town. Sounding familiar?!! So we drove to the next town – and low and behold, it was the wrong sort of gas. In fact, the guy very knowledgable informed us, that we couldn’t get this sort of camping gas in the whole of Eastern Europe. I quick scroll through Campingaz Europe’s website sadly confirmed this. So bad news! We are on our last gas cylinder – just the small one used as a spare – to last us through Hungary, Romania, Bulgaria and Greece. Looks like we’ll have to ration our tea-making and eat out more!

After returning to the campsite, and setting up again, after our fruitless morning, the weather was still looking murky. However, undeterred, we set off for our planned hike in the Tatras Mountains.

The walk into the neighbouring village, along a cycle track in the woods was pleasant enough. We headed for the cable car station, and opted to go up the mountain and walk on the top. The woman selling us the cable car ticket did ask us if we were sure – that should have been a clue. After only a few hundred feet up in the cable car, we met with a complete white out. The cloud cover was so low, and so thick, we couldn’t see a thing. At the top of the second station, there was supposed to be a wonderful mountain lake, but when we alighted from the cable car, we couldn’t even see the path, yet alone the lake.

Defeated, we headed to the cafe for a coffee, and discovered that this was where the rest of the Slovakian holidaymakers were hanging out too. After a decidedly insipid coffee, we headed back down the mountain.

About five minutes into our descent, still in a complete white out, the cable car abruptly stopped, and started swinging alarmingly. I must admit, that at this point, I completely lost the plot. I’m quite sure that the people in the next car could hear me whimpering and quietly screaming (although Howard would debate quietly). I suddenly had memories of a newspaper article I had read about people getting stuck for hours and hours in a cable car, and in the end needing to be winched off by helicopter, one by one. Howard tried his best to reassure me, but it wasn’t until the thing actually started moving again, that I eventually calmed down. Feeble, I know – but somehow it seemed worse with absolutely no visibility at all.

Back down in the village, we found a decent cup of coffee in the ‘Ski Museum’ cafe, and Howard tried out some ‘poppyseed roll’. On our gas hunt earlier, we had passed fields and fields of poppy heads, and commented to ourselves how pretty this would have looked when all the fields were red with poppy flowers. They grow them here for their oil, but a local delicacy is poppyseed roll, a sort of poppy seed and pastry roulade. I must say, it looked better than it tasted – pretty worthy, to be honest. Although Howard assures me that it is packed with linoleic acid, which is good for brain function and sleepiness. Maybe that is why he was trying to force feed me with the stuff!

So sadly, our day trekking in the High Tatras mountains didn’t result in wonderful vistas – and consequently, very few photos today. Tomorrow, we move on – hopefully we will catch a glimpse of the mountains again before we leave.