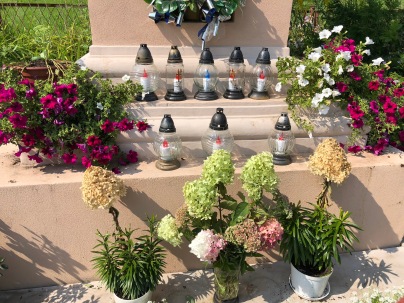 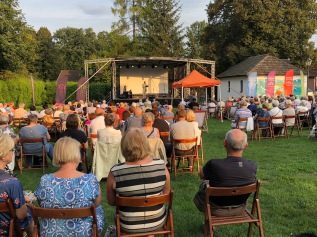 Today was a day of contrasts. Our campsite last night was ‘interesting’! We drove about an hour south of Warsaw, to a campsite with mixed reviews. Some said it was the best campsite since buttered bread, others said it was dire, with a disco from 10pm to 3.30am. In reality, it was probably more of the latter! Being the Polish school holidays, it was teaming with children, and more importantly, teenagers. As we arrived, there was loud music blaring from a group of youngsters by a bonfire. The lady who showed us to our pitch seemed  really sweet, if a little apologetic. Within an hour or so, it became apparent why. We started to hear the sound of loud screeching brakes. This was the local youngsters joy-riding round the empty car park next to the campsite. Then there were the trains, going past every fifteen minutes or so. The final finale was the teenagers prowlng in the washblocks. I went for my evening shower, and it was like I was in a rave, with loud music blaring, and hormonal youths everywhere. Strangely, Howard reported the gent’s toilet block as very civilised – they were obviously all in the ladies. When, an hour later, I went for my last pee of the night, the little darlings were noisily throwing up into the sinks – joyous!

The noise of screeching tyres went one until about 3am.

This morning, the campsite was strangely quiet, but the wash blocks were far from hygienic. I held my nose, as I went in to wash.

We didn’t hang around, and left in good time, with a long drive ahead of us. We stopped briefly in Warka, to take a look at the huge Catholic Church, with people arriving for Sunday mass. All of the town was shut. The people here take Sunday very seriously, with absolutely nothing open, bar the petrol stations. The countryside around here was full of apple orchards at every turn. I had never thought of Poland as a great apple producer, but it clearly is. The drive onwards towards Krakow was tedious. The roads were bumpy and pot-holed, with many roadworks causing delays. Even on the main ‘A’ road, a cockerel stepped out in front of the van, and there were ‘cow warning signs’ along the route. They are clearly building a new road network here, but until then, the driving is slow and quite stressful. Like the Lithuanians, the Poles are inpatient drivers, with a tendency to overtake constantly. We stopped only briefly for a coffee and pee stop. The temperature was soaring to an uncomfortable 32 degrees, and frankly, it was better in the van with the air-conditioning, than outside.

We arrived at our campsite on the outskirts of Krakow in good time. Although, not in anyway near the pleasant countryside of last night’s campsite, and incredibly crowded, it has turned out to be fine. Since the campsite was so busy, we were allocated an area away from all the ‘Big Whites’, overlooking the neighbouring park. The washing machines were available for free – a first in nearly 8 months, and the campsite was very quiet. As we completed our washing, and were hanging it up outside on make-shift lines inside the awning, we started to hear singing. The sound was stunning. It was a soprano’s voice, singing opera. Then a male tenor joined in. After pegging up the washing, we walked over to the park to investigate.

It turned out that there was an operatic concert in the adjacent park – free of charge. A large group of locals were sat on chairs and deckchairs enjoying the music. It was part of the local music festival. The singers were absolutely brilliant – of professional standard. It reminded me a little of the wonderful concerts at Glamis that we have attended in the past. We sat with a glass of wine and enjoyed the music for a while, before returning to the campsite for supper. As we sat outside eating tea, the concert drew to a close. Not before I had enjoyed some wonderful opera classics, as well as some more popular music from ‘My Fair Lady’ (I could have dance all night), and ‘The King and I’. Many of the songs reminded me of my Dad. For years, he was a member of the ‘Kingston Hospital Operatic Society’, and many of these popular classics had been favourites of his, often singing them around the house.

So today, we have gone from loud grungy teenagers to a wonderful operatic treat. Who would have guessed! It is one of the joys of travelling – you don’t know what is going to be around the corner next.