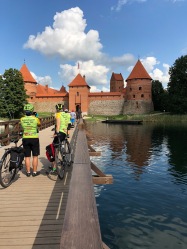 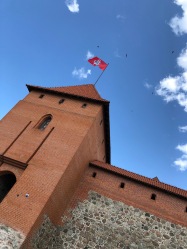 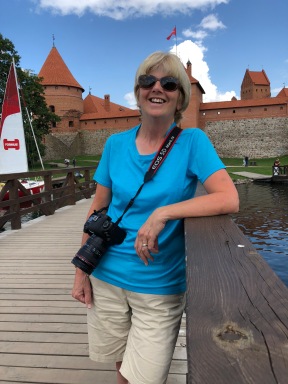 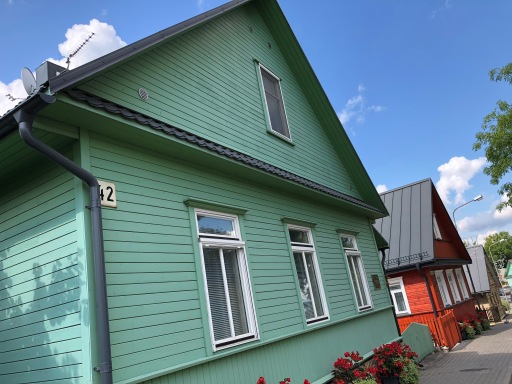 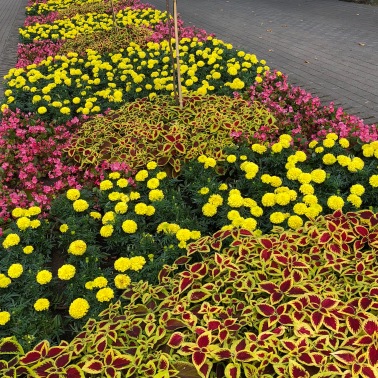 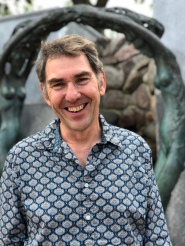 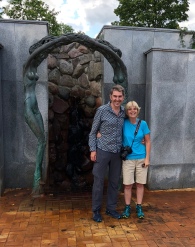 Today, we left Vilnius, and headed towards the Lithuanian countryside. First, we stopped at a place called Trakai, 18 miles to the west of Vilnius. The star attraction here is Trakai Castle, situated on an island, surrounded by a moat. This was the capital of the Grand Duchy of Lithuania until 1323, when the capital moved to Vilnius. The red brick fortification is a stunningly good looking castle, and not surprisingly, attracts hoards of visitors. As we drove into Trakai towards the castle on the peninsula road, fringed with attractive wooden painted houses, a women leapt out into the road with a parking sign, and gesticulated to us to follow her. Indeed, she was so demonstrative, that we did just that. It turned out that she had turned her drive and back garden into a lucrative car park, selling car parking places for five euros a piece to people visiting the castle. She bossily directed Howard into the allocated spot, and took our money. She told us that we could stay all day, if we pleased. We counted fourteen other cars in her back garden!

From the end of her garden, a small path led to a pleasant lake-side walk towards the causeway to the castle. En route, we stopped at a cafe, really because we needed a pee. After ordering two coffees, we stopped to talk to a large group of cyclists, with identical lycra tops. It turns out they were a group of twenty eight individuals, mostly around our age, mainly from Canada, but not exclusively, who were on a cycle trip through Lithuania, Poland and Ukraine. We spoke to an English guy from Yorkshire, who had taken part in eight previous trips. They were a lovely bunch of people, very jolly and up for a challenge. None of them looked super fit, but they said it got easier each day, as their fitness level improved. I am always in awe of people up for an adventure. The certainly were having fun, which is the main thing.

We walked across the causeway to the castle, and took a walk around the perimeter. People were offering boat trips around the lake, and there were plenty of stalls selling touristy things on the way in. We didn’t linger, however, unlike the cyclists, who were still sat eating their lunch as we left. With so many miles ahead of them, they seemed incredibly relaxed!

We headed on through the Lithuanian countryside, driving south westwards. As we drove through the Dzukija National Park, a pretty forested part of countryside, we couldn’t help but notice a string of people, every fifty yards or so, along the side of the road, selling what looked like berries and mushrooms in jam jars, either from make-shift stalls, or from the boot of their cars. I later read that the Dzukia people who live in this woodland are known for their cheeriness, their great singing voices, and their ability to make a living out of virtually nothing. It is these berries and mushrooms, which they forage in the woods in season, that provide them with a modest income by selling them along the highways. Afterwards, I felt bad that we hadn’t stopped and bought some blueberries or chanterelles, to help support these people.

We continued on to a town called Druskininskai, a town within a kilometre or two from the Belarus border. I had read about the town in an article someone had sent me a week or so ago from the Guardian (thanks Ian!), and since it was almost on our route, we decided to visit. It is a popular spa town, frequented by Poles and Belarusians, famed for it’s salty mineral water, which is supposed to have healing and beautifying properties. On the road into town, there were plenty of posters, with people covered in mud, presumably having some sort of beauty treatment.

Just after we parked up, I spotted the real reason that I had wanted to visit. Directly ahead, in the balmy afternoon sun, was the spectacular sight of the sky blue, onion-domed Russian Orthodox ‘Joy of All Who Sorrow’ Church. It was just beautiful! I had seen a photo in the online Guardian article, and had been drawn to see it for myself. Thankfully, I wasn’t disappointed. As I snapped away, Howard took to walking around in circles around the church, to get his step count up, much to the amusement of the locals!

We then waked down to the riverside, past the Druskininskei Health Centre, where patients are offered treatment for all forms of diseases and musculoskeletal problems, by therapy with the mineral water, mud and massage. The mineral water is high in salt content with 52g per 100ml. Just past the treatment centre, on the river bank, is a fountain, exuding the healing mineral water. Locals come here and splash it on their faces, since it is thought to enhance beauty. Needless to say, my husband decided to make an exhibition of himself, by standing under the fountain, and dousing himself in the stuff. Despite rousing a round of applause from the locals, I can report that he is no more beautiful tonight!

We decided to give Grutas Park, another local attraction, a miss. It is the world’s only ‘Soviet Theme Park’. Set up by a local entrepreneur, it is a complete piss-take on the Soviet regime. He bought up large statues of Stalin, Lenin and other Soviet leaders at the time of the break-up of the Soviet Union. They now sit in his ‘theme park’ which is surrounded by barbed wire, and has a mock up of a Soviet concentration camp, playing patriotic Soviet songs, offering herrings and Vodka in the cafeteria, and generally taking the rise out of the Russian regime that dominated Lithuania until they gained independence. It seems utterly tasteless to the extreme, but I guess the only way people who lived through this awful period in their history can deal with it, is to mock it.

Tonight we are camping near the town. It is a pleasant change to be back in Oscar, after our string of nights in hotels. The campsite is fairly basic, with no curtains on the showers, for example, but the people are friendly, and the campsite bar is serving Lithuanian beer, which Howard seems to like.

Tomorrow, we head for Poland. Several of the campsites have posted that due to the heatwave, they have no water or showers, so I am not sure what to expect. Hopefully, it won’t be too grim. So tomorrow, we have a long drive. I just hope that the Polish driving is more forgiving than the Lithuanian’s. Whatever we find, it will be an adventure. Poland, for both of us, is a step into the unknown. Bring it on!