Last night was hardly relaxing. Once we had dealt with the hoards of biting insects, and all the young children had eventually scuttled off to bed just before eleven, the teenagers came out to play. It turned out that the spot we had picked by the lake was on their direct route down to the water. Thirty or so youngsters made their way down to the shore, and started having a party. On went the music, and every thirty seconds or so, there was a loud splash as one of them hurtled themselves off the pontoon into the water. At midnight, it was still daylight, and the party was just getting going, as more of the youths on the campsite negotiated a late pass from their parents. Howard and I nodded off to sleep. But then, as they all returned to their tents and vans at about one thirty in the morning, we were woken yet again by the tramping feet going past Oscar.

This morning, the campsite was silent. By nine thirty, hardly anyone had stirred, even the adults. I guess everyone’s diurnal clocks get confused in 24 hour daylight in the Arctic.

After breakfast, we headed in to the town of Jokkmokk. It is a centre of Sami culture, with lots of craft shops, and a museum called Ajtte, celebrating the Sami culture. We spent a pleasant hour going round the museum, which unusually was free to enter. My favourite exhibit was a 3D multimedia 180 degree film, taking you soaring through the Lappland landscape. In this part of the world, the Sami population is still very much alive and kicking, but over the years, they have adapted to the modern world. Reindeer herding is still one of their prime activities, but these days, the reindeer are herded by Sami on snowmobiles, rather than on foot or with dog sleds. For most of the year, the Sami live in wooden houses like the rest of the population, but the herders still sleep in tents when they are away bringing in the reindeer from their summer pastures.

Museum done, we hit the road, heading south towards the Swedish coast.

The drive was incredibly monotonous – mile upon mile of beech and pine forests. After the spectacular scenery of Arctic Norway, in truth, it was a little underwhelming. Every so often we would see a road sign, advising of moose. However, despite all the warnings, we never spotted one. As we crossed the sign indicating that we were leaving the Arctic Circle, I couldn’t help but feel a little sad. 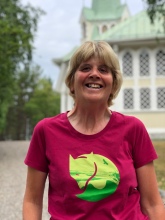 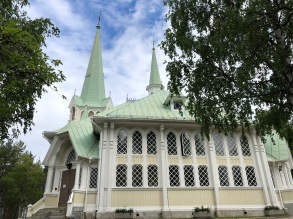 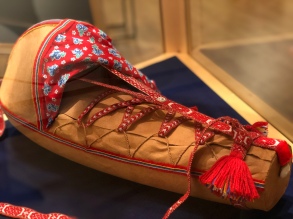 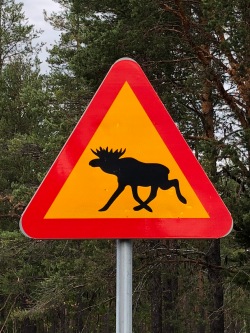 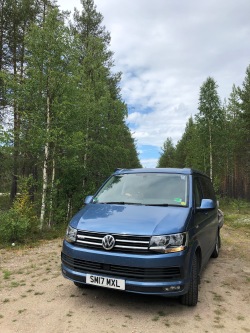 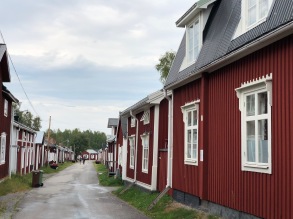 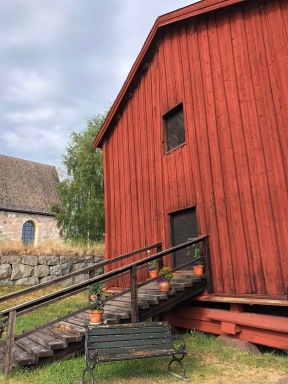 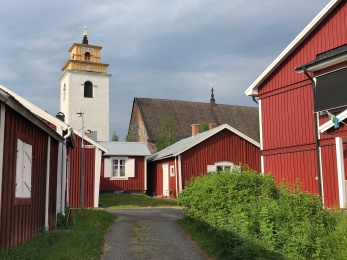 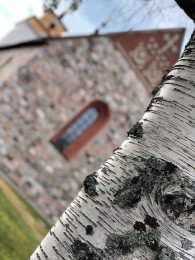 We arrived at Lulea mid afternoon. After grabbing a coffee, we headed off to a place called Gammelstad, a UNESCO World Heritage collection of little red Swedish cottages that used to be the centre of medieval centre of northern Sweden. The centre of activity centred around the stone church, built in 1492. Pilgrims would come at weekends to their church from all over northern Sweden, and the little red huts were used to accommodate them. Although very picturesque, I must say it felt a little like a ghost town. The place was virtually deserted, bar the lady in the visitor centre, and Howard and I did wonder if perhaps we had missed some cataclysmic event that no-one else had told us about! Clearly the little houses are no longer in regular use, although they had put up net curtains and filled the windows with plastic flowers to make it look like they were – all a bit staged.

We then headed the short distance to our campsite. A world of difference from last night’s melee! This is a quiet small campsite, and we were lucky to bag one of the last places. We really are going to have to start planning ahead! It is also uber organised – you have to book a slot to do your washing. Sadly, all there ones today were taken – so we have been given the 7.30 am slot. Oh the joys of communal living! Think of us tomorrow morning sorting out our ‘smalls’ at the crack of dawn, all ye with the luxury of your own washing machines!!