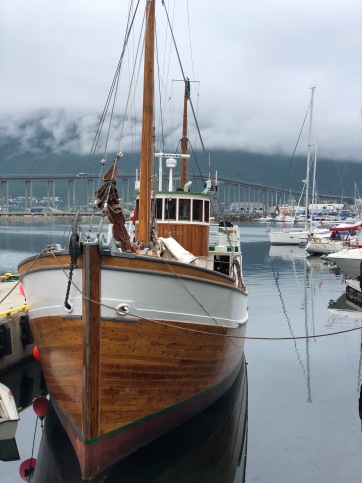 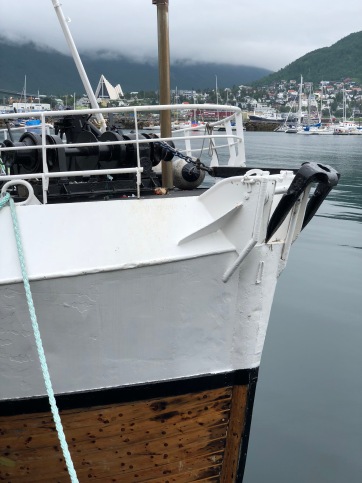 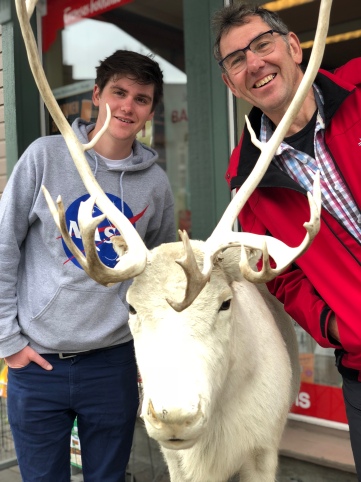 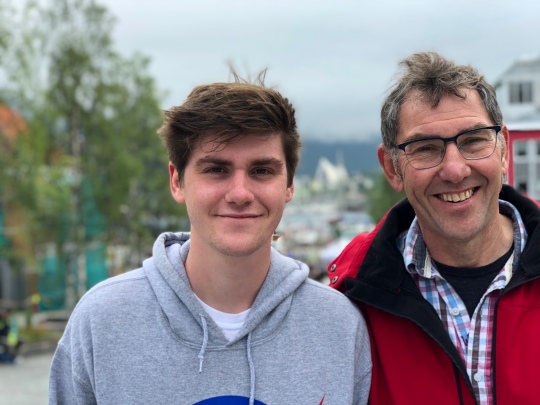 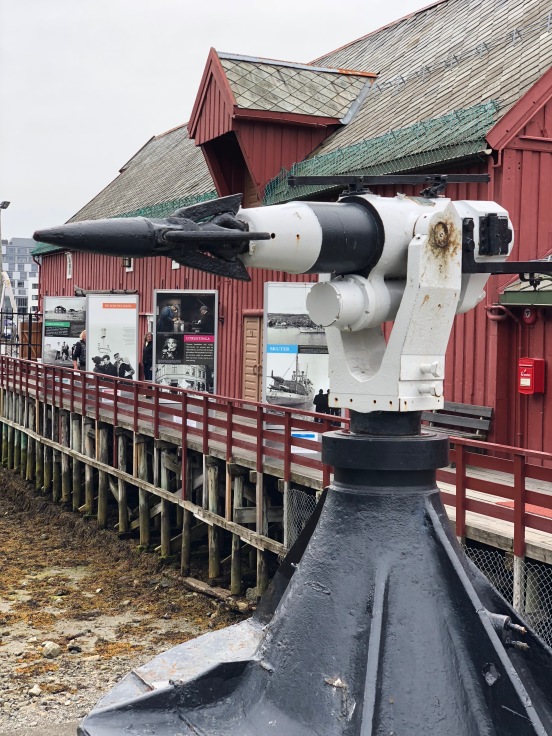 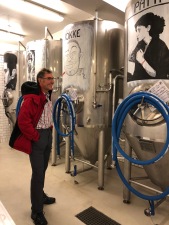 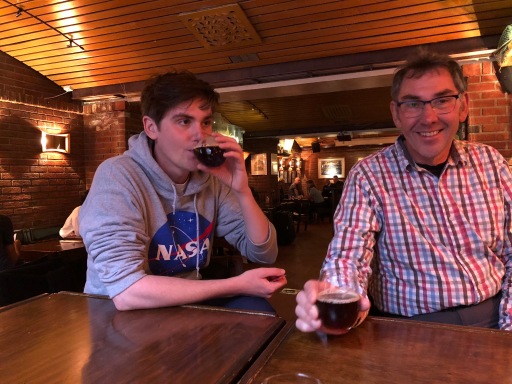 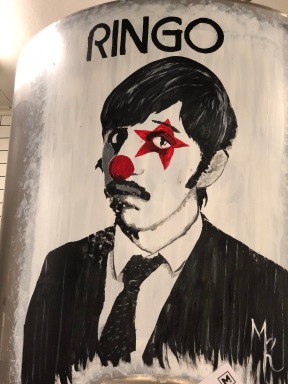 The ‘Midnight Sun’ concert last night in the Arctic Cathedral was absolutely brilliant, exceeding all our expectations. It turned out there were just three participants – a soprano singer, a female flautist / singer, and a male organist / pianist. The concert started with the organ playing and the female soprano singing a hauntingly beautiful Norwegian folk song from the back balcony. The acoustics were utterly wonderful, and her stunning voice just echoed around the cathedral. On the third number, the two musicians and the singer slowly walked up the aisle and came to the front of the cathedral. For the next hour we were utterly mesmerised by the music and singing. It was mainly traditional Scandinavian songs and music, with one piece by Debussy. The flautist was just amazing, and towards the end, she also sang a Sami lullaby, accompanied on the piano. The applause at the end of the concert was heartfelt. The performers then came back to do an encore. To our absolute delight, it was ‘Auld Land Syne’. The soprano sung it in the style of the folk version. If any of you have seen the ‘Sex and the City’ film, you may remember at the end that they played the Mairi Campbell version of this traditional song. She sung it absolutely beautifully, the only song not sung in Norwegian, and it really touched the three of us. Halfway through, Howard, Oliver and I crossed and linked arms, and very discreetly swayed to the music. Magic!

As we left the cathedral, the singer and musicians were at the door, saying goodbye. We explained that we were from Scotland, and had really appreciated the last number, and they seemed genuinely pleased with our appreciation.

We got a taxi back to our hotel. The taxi driver was a Somalian refugee, who had been in Tromso for four years. Back home, he had been a TV anchorman, but had brought his wife and three children to Europe for a better future, without the constant worry of war and corruption. We had a nice chat – he was clearly an intelligent man, and we joked about the difference in weather between Arctic Norway and sub-Saharan Africa. He clearly struggled in the cold dark winters, but was studying between work at the local TV station, and taxi driving in the evenings to subsidise his income. I’m sure he will make a great success of his life in Norway, and a prime example of how hard working many immigrants to Europe are prepared to be. It saddens me that some people are less than tolerant of these brave diverse individuals, who have given up everything in their home countries to do the best for their families in a new life abroad.

We all slept really well in our beds last night. After a leisurely start, we headed into Tromso for coffee and breakfast. Our original plan had been to catch the cable car up to the mountain overlooking the city, and take a walk. However, the weather was yet again against us. We couldn’t even see the mountain for the mist, and felt that there was no point just walking in cloud. So instead, we headed for the Polar Museum for an hour. Here they had displays of trapping and hunting in the Arctic, a section on whaling, and then a really interesting display about polar exploration. In particular, the sections on the polar explorers Amundsen and Nansen were intriguing.

We sourced a quaint little cafe for a bowl of soup for lunch, then had a look around the town. It is attractive enough, with a pleasant harbour, and streets extending up the hill of old clapboard houses. In it’s day, it had clearly been very prosperous, which is what had led to it being given the nickname ‘Paris of the North’. I probably wouldn’t go that far, but it certainly has an appeal. It is a university city, but clearly all the students are away on their summer vacation, leaving the place pretty quiet – a bit like St. Andrews when the students have all left, but the golfers not yet arrived.

There was some debate about what to do this afternoon, but in the end the ‘boys’ opted to do the Mack Brewery tour. Initially, I had thought I’d give it a miss, since I don’t drink beer, but am really pleased I opted to tag along. The Mack Brewery is the most northerly brewery in the world, and is the heart and soul of Tromso. It has been in the Mack family for generations, and a film about the brewery was just as much about social history, as about brewing. We were then shown around, and taken to the ‘Microbrewery’ that is on site, whereas the main brewing operation has moved to newer purpose built premises to the south of Tromso. The ‘Microbrewery’ was a hoot. The two young brewers apparently concoct their new brews to the sound of rock music. Each of the steel fermenters has paintings of famous musicians painted on the front, and they recommend that you drink each new ale, listening to the rock music that inspired it’s creation! I’m sure a bit of a gimic, but quite good fun, nevertheless. The programme inevitably ended with a tasting session – Howard and Oliver were mightily glad to get extra from myself, and all in all, it was a thoroughly enjoyable afternoon.

This evening, we had a final meal together, before Oliver leaves bright and early in the morning. It has been really lovely seeing him again, as I do miss then boys horribly. I am just praying that we manage to get him to the airport at the crack of dawn, since perhaps unwisely, I have yet again let the ‘boys’ out for one last farewell beer together. If it’s anything like last night, there’ll be a bit of ‘Dad dancing’ on the way home! Heaven forbid!!