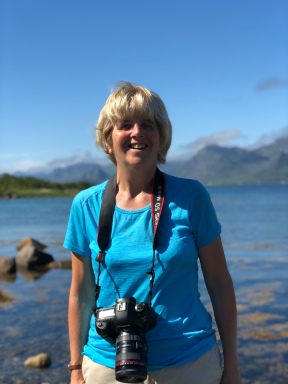 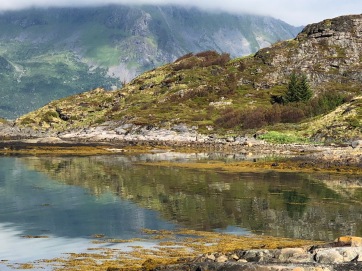 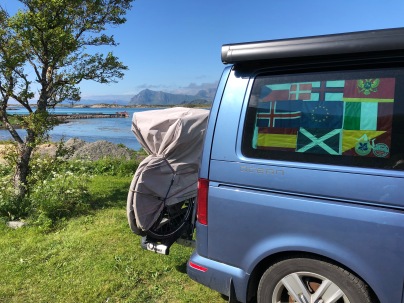 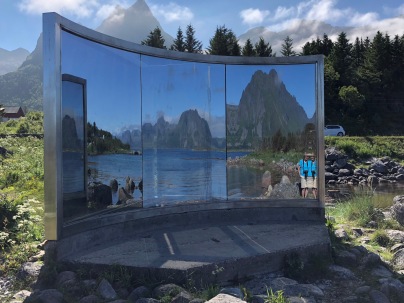 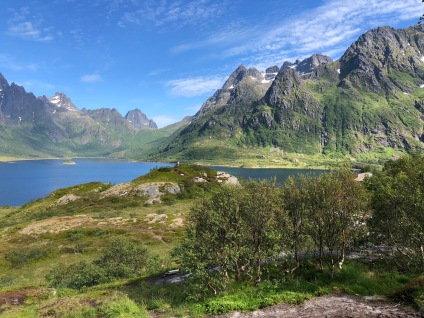 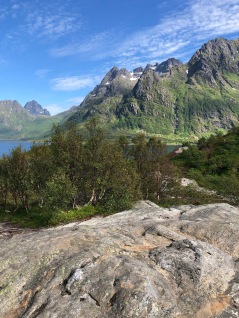 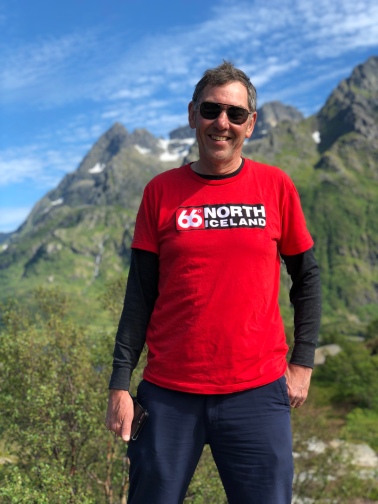 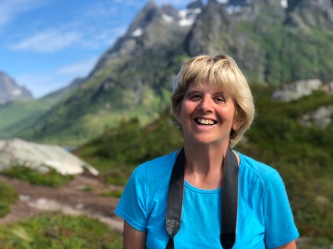 Yesterday evening, we were treated to glorious sunshine on our campsite. We sat eating our supper looking out over the water, slowly watching the sun go down. At 11.30 pm, we decided that we may as well stay up (along with most of the campsite), to see the midnight sun. So we stood on the pontoon projecting into the fjord, and watched the sun very slowly nudge it’s way to the horizon. Sunset was due at 12.35 am, and sunrise again at 1.26 am. We waited until ten minutes after midnight, as the sun slipped behind a low bank of cloud, and decided that since we had seen the sun after midnight, we would call it a night. Shortly after 1.30am as I lay in bed, I started to hear the dawn chorus start up.

This morning was beautiful. For the first time since our first morning in Lofoten, we awoke to sunshine, and the fjord view looked completely transformed from the dull vista we had viewed the day before. We ate our breakfast outside, pinching ourselves that we were at 68 degrees in the Arctic Circle. Yesterday had been quite a long day, with a lot of driving, so we opted to take our last day on Lofoten at a slower pace.

We first headed back the few hundred yards along the road to the fascinating mirror sculpture we had seen previously, hoping to capture it in the sunshine. When we arrived, there were two cyclists there, wearing bright orange lycra. I patiently waited until they had finished looking, then stepped forward with my camera. As I did so, a family of five Koreans threw themselves out of their car, and literally ran in front of me as I was taking my first photo. Once more, I stepped back and waited. And waited ….and waited. They seemed completely oblivious to the fact that I had been trying to take a photograph, and had stepped right in front of me, or possibly wondering why I didn’t just include them in it. In the end, I could bear it any longer, and we headed back to the van. Five minutes later, as we headed northwards, who should overtake us at breakneck speed, but the Korean family in their hire-car, no doubt en route to their next photo opportunity!

We headed for Svolvaer, the largest town in Lofoten. In all honesty, it was a bit of a culture shock for us both, to be back in ‘civilisation’ for the first time since leaving Trondheim. We had the half-hearted thought that we might catch an excursion boat to Trollsfjord, but when wet saw the boat coming in heaving with tourists, we were actually quite relieved that all the trips were fully booked for today. So we grabbed a quick coffee and skedaddled.

We headed northwards, stopping a couple of times at viewpoints, and then turned off the main road to our campsite on the northern coast of Austvagoya, the most northerly of the Lofoten Islands. We had read that the best spots on the campsite, by the side of the fjord, filled up early. Howard had also sourced that they had a restaurant / bar, which meant that they were also likely to have a TV, so there was a possibility he could watch the World Cup football.

We arrived mid afternoon, and did indeed manage to grab the last fjord-side pitch – just gorgeous. The lady at reception also told us that there were boats belonging to the campsite, down by the jetty, which we could could use free of charge. So we grabbed a late snack lunch, and headed off to investigate. We fitted ourselves out with lifejackets, and headed to the jetty. Disappointingly, the rowing boat had just been taken out by two young Eastern European girls. One was rowing, whilst the other was attempting to fish from the side of the boat. It was immediately apparent, that there was not a hope in hell of them catching anything. For one, they were making such a din, loud chatter interspersed with raucous laughter, that they would have frightened all the fish away. Secondly, the girl rowing was utterly inept, and was splashing her oars, like she was trying to bang a drum. A real fisherman appeared on the jetty, and looked exceedingly disapprovingly at the two girls – a little like the look that Colin Firth gives Hugh Grant in Bridget Jones’ Diary – you know the scene, where Bridget and Daniel Cleaver are splashing around in a rowing boat?!!

Eventually two Dutch girls came back with the pedalo, so we opted to have a go in this instead. The fjord looked sublime in the late afternoon sun, with the mountains as a backdrop. We were so relieved that the Trollsfjord trip was sold out! Secretly though, I would have loved to have had a row – I think my rowing muscles have atrophied on this trip – I will need to get back into training as soon as we get back. As we came into the jetty, the rowing boat girls had given up, but the fisherman was hauling in a fish, glinting in the sunlight.

On returning from our campsite, Howard was alarmed to see that the electricity was going to be off between six and eight – his football plan was looking dodgy. Fortunately though, the electricity came back on, just in time for the start of the England game. I am currently being treated to a meal in the restaurant, just so Howard can watch the football. We have been joined with two Dutch couples. I suspect that they were originally supporting Croatia, but they are being very diplomatic just now! It’s very tense in here – I can’t bear to watch!!  I think my pudding depends on a win!!