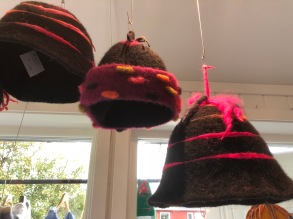 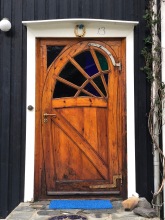 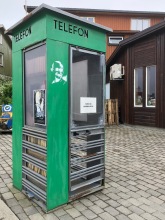 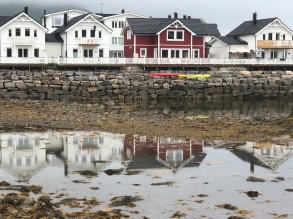 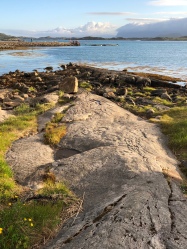 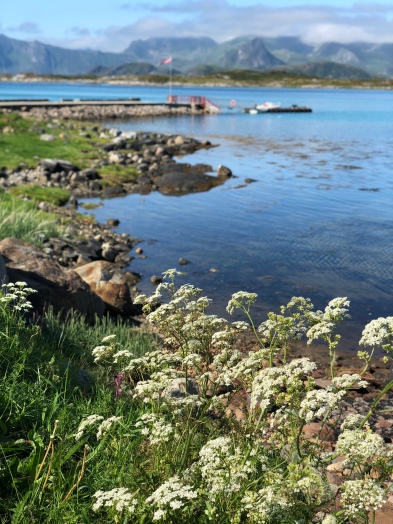 Our day today has been much quieter. The weather was still pretty cold and overcast this morning, so we made the most of our warm room, and spun out the lovely breakfast that was included in the price. I then made a valiant attempt to try to retrieve some of my photos off the cloud, using the hotel’s WiFi. I managed to get most of them, but the download speed was so slow, I started to lose enthusiasm. I did however manage to put a few photos on the blog in a somewhat haphazard fashion, conscious we were due to check out at any minute.

We opted on a walk around Henningvaer in the dull light. It was much quieter this morning, compared with last night, and we largely had the place to ourselves for the first hour. It is a very pleasant little community, with loads of cod drying racks all around the harbour, now empty. Just in the few days that we have been in Lofoten, we have witnessed the full scale harvesting of the dried fish and cod’s heads. The couple of days of dry weather led to a frantic picking of the fish, loaded first onto tractor trailers, and then taken straight away to be packed onto pallets for dispatch onto the ferries and away to the continent. It was a frenetic affair, the fishermen desperate to make good use of their weather window. It has left all the racks empty now, like huge skeletons. In a few weeks time, these racks will be dismantled, and the wooden rods stored until next winter.

As we were walking back, we came across a shop selling hats. Inside, the lady who made the hats was sitting at her machine, toiling away. The hats were all shapes and sizes, some knitted, some made of felt, and many with added tassels or adornments. Having just walked around in the freezing cold, I became tempted by a turquoise-blue one that matched my jacket. I tried it on, and it was a done deal. I wore it out of the shop, my ears already heaving a sigh of collective relief to be out of the biting wind.

We warmed ourselves up with a coffee, then headed out of Henningsvaer, and up the coast a little way to a place called Kabelvag. It was a quiet dreamy sort of place, quite atmospheric with the low mist hanging around the harbour. We came across an old telephone box, now converted into the town’s ‘library’. Essentially, it seemed to be running a sort of book swap service – people would bring books that they had read, and then help themselves to a book that took their fancy. Such a good idea for this little community. It made me wonder if perhaps there was merit in trying it out in our hamlet’s glorious bus shelter, which is already adorned with paintings, magazines, fresh flowers and curtains, as well as the almost non-existent bus timetable, and a phone number for the community pick-up bus.

We had a wander round the harbour, and came across another glass studio, with yet more glass hearts – it’s clearly a ‘thing’ in Lofoten. A sign on the local bar / restaurant reminded us that we were now over 68 degrees north, although depressingly, a sign we had seen in Henningsvaer informed us that we still had over a thousand kilometres to reach Nordcapp. We stopped to buy some bread in the baker’s. The baker himself served us. He apologised, as being Monday, he had sold out of bread by 8.30 am. He did still have some interesting sour bread baguettes, which he insisted we try, before buying.

We then took a quick look at the nearby Vagan Kirke, a large wooden church, known locally as the ‘Cathedral of Lofoten’, apparently able to seat over a thousand people in the congregation.

The weather was still cold and dull, so we opted to drive to our campsite for tonight. En route, we stopped at Lyngvaerstranda, and one of the ‘Skulpturlandskap’ sculptures. This glass fronted sculpture from one side looked just like a metal box, but when you walked around the other side, it’s polished metal concave surface reflected the local landscape. It was quite stunning, and a great improvement on the rather underwhelming sculpture that Howard had hunted out further south. I was trying to take photos of the reflections, when I became aware of a bright yellow thing in my camera lens. Turned out it was Howard wearing a sou’wester, doing a credible impersonation of Captain Bird’s Eye. Another couple who had stopped to look at the sculpture gave me a sympathetic glance. ‘It happens all the time,’ I responded, trying to explain away his strange behaviour.

We reached our campsite in good time to cook tea and put some washing on. When we parked up, we were the only camper van at this end of the site. However, as the evening has worn on, we have become surrounded by eight ‘Big Whites’. We have taken to singing the theme tune to ‘Jaws’, every time one turns in. We have maybe been on the road too long. Simple things like this now reduce us to hopeless laughter!