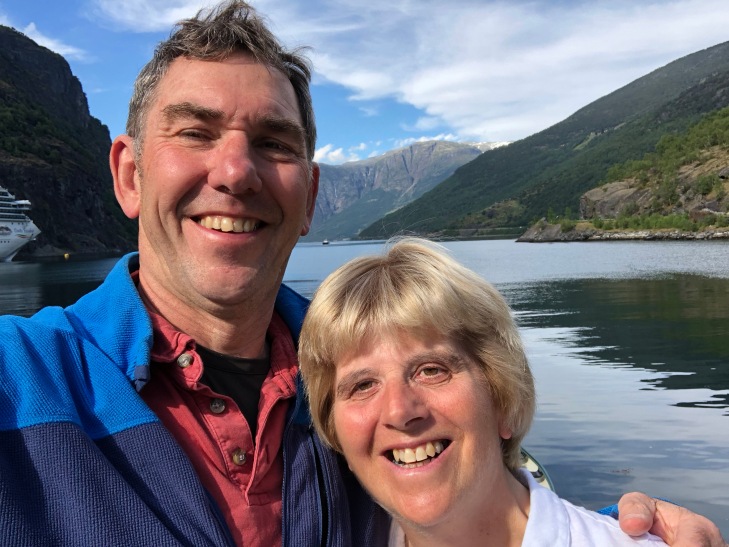 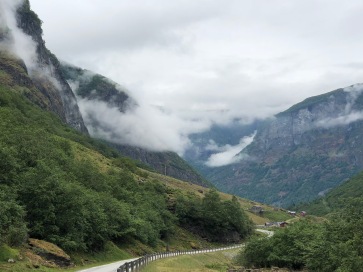 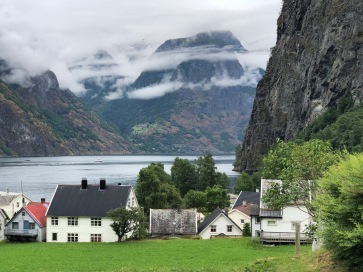 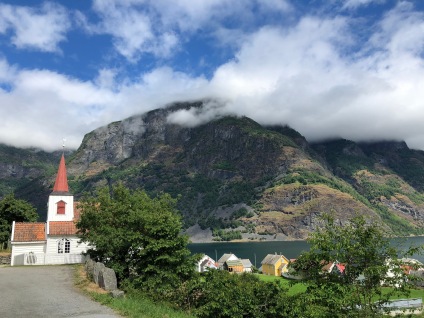 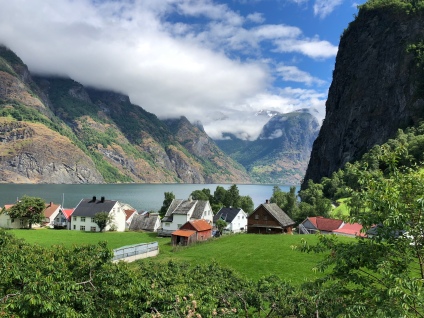 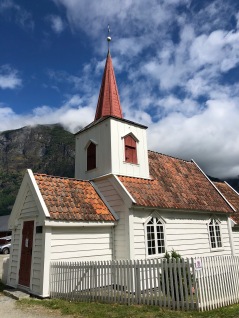 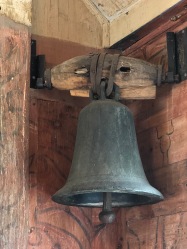 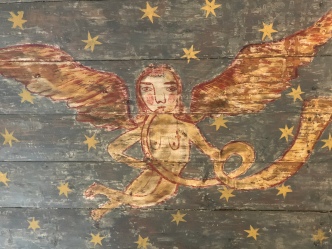 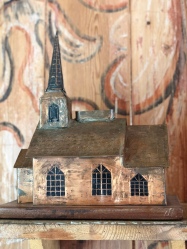 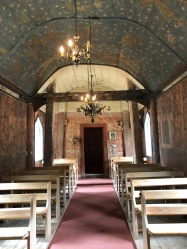 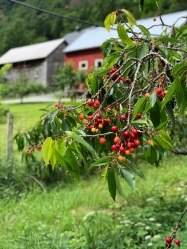 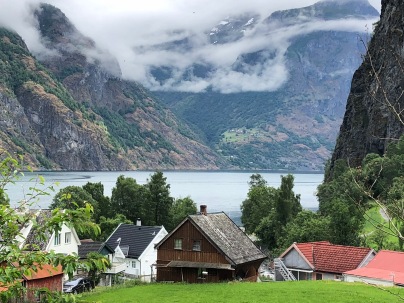 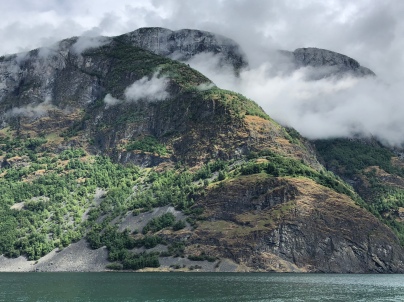 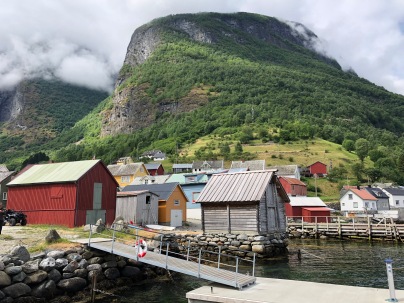 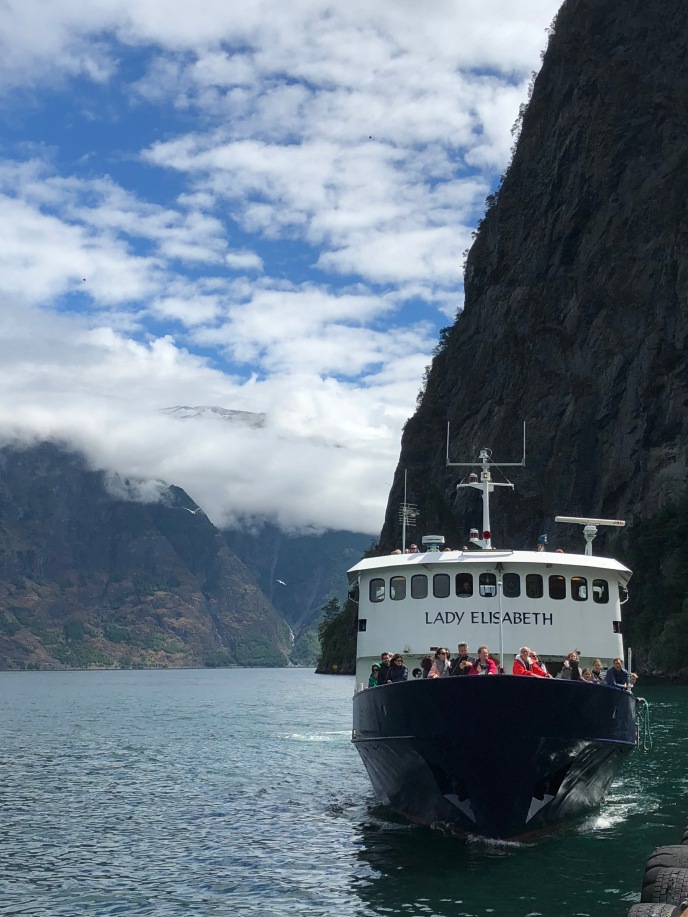 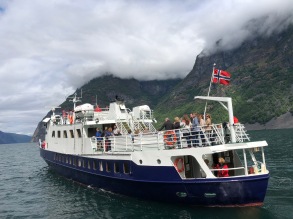 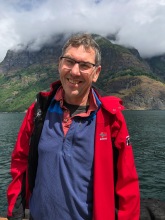 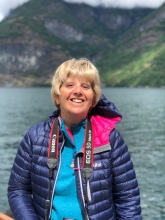 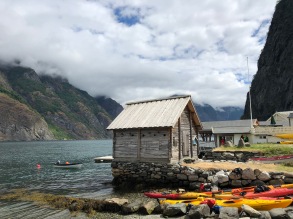 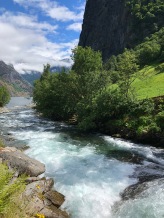 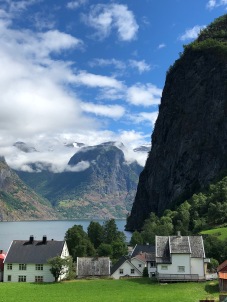 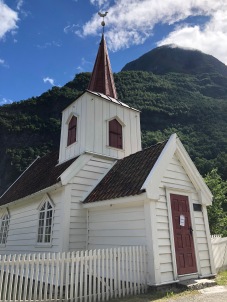 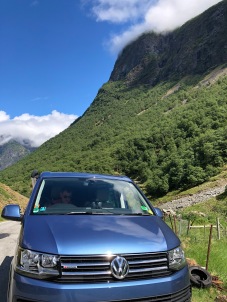 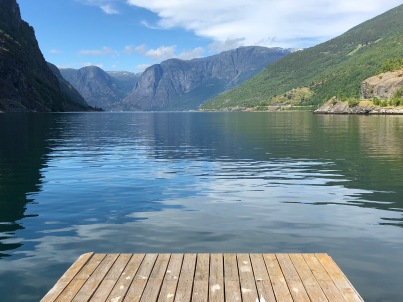 We were greeted by a cold and damp start to the day, with ominous low cloud hanging over the fjord, and the arrival of a huge cruise ship into the harbour. Our campsite had been virtually full by yesterday evening, and for the first time this trip I had to queue to get a shower. The prospect, though, of a night in a posh hotel was keeping me going.

After we had packed up Oscar, we decided on an outing this morning to one of the other tributaries of Sognefjorden, and to visit the village of Undredal.

Undredal sits besides Aurlandsfjorden, and is famous for the smallest ‘Stave’ church in Northern Europe, as well as it’s brown goat’s cheese. As we drove down the steep valley, with looming cliffs on either side, the cloud was so low we felt we could almost touch it. It formed receeding layers, leading down to the fjord.

Undredal turned out to be a stunningly beautiful village, and much quieter than touristy Flam. First we went to visit the church. It was indeed small, very much in the style of Flam church, which we had visited the day before. These Stave churches are unique to this part of Norway, built of wood, and very simply decorated inside. Like Flam, the walls were decorated with ‘naive style’ paintings. Very effective and better for it’s simplicity.

Next we walked down to the fjord side. We stopped at a lovely little cafe and had coffee and shared a piece of home made apple cake, whilst we watched the ferries come and go down the fjord. A group of canoeists were just into the water and receiving instruction, when the local ferry came tooting round the corner, and had them all paddling for their lives away from the dock. By now, the sun had started to burn through the cloud, and for what seemed the first time in days, we saw some blue sky.

We sat on the deck, savouring the warmth. I had been so cold first thing this morning, that Howard had put the heater on in the van. Suddenly now, we were peeling off layers in the heat.

After a wander round the rest of the village, we wound our way back to Flam. By chance, the hotel that we had booked some days ago turned out to pretty close to our campsite. We checked in and enjoyed a drink in the sunshine, feeling very decadent not to be brewing tea in Oscar.

We spent a leisurely afternoon taking a walk along the side of the fjord. As we returned, we watched the huge Costa cruise liner prepare to leave. The enormous ropes were pulled in by winches, whilst the tourists stood high up on deck watching. The liner was so big, that the people on deck looked like matchstick people. It is quite amazing how sleekly it manoeuvred it’s way up the narrow fjord – some rather expert navigating. But it did make us think of the other Costa cruiser that came aground off Italy, because it sailed too close to the shore.

Back at the hotel we are treating ourselves to dinner to celebrate our wedding anniversary. Tomorrow we start the long trek northwards. We had hoped to cadge a lift for part of the way on the Hurtigruten, but it turns out that it is booked up months in advance, so we will be driving the whole way. The guide book describes it as a ferry that is the lifeline for the remote communities along the Norwegian coastline, but it turns out this is not the case at all – maybe in the past it was, but now it has become yet another magnet for tourists, most doing the full cruise from Bergen to Kirkenes near the border with Russia, and back again.

I just heard on the radio that today was the hottest day of the year in the UK. I might have a tinge of envy, but at least we did see the sun today, so things are looking up at least. Long may it last!