Today has been quite spectacular. Words cannot describe the scenery east of Hofn, as we drove towards the East Fjords. We set off with myself driving, but the scenery was just so stunning, that it was really hard to make any real progress along the road. Every five minutes, I would screech to a halt beside the road to take a photo. The mountains looked dramatic in the subdued sunlight, which highlighted all the layers and different colours due to the growth of lichen. After an hour or so, Howard asked whether the photos might all look a little similar – ‘lots of rocks’ was I think his comment! This , of course, was code for ‘Stop taking all these photos, and just drive’. Eventually, he could take no more, and jumped in the driving seat, eager to reach our designated coffee stop before lunch time. We arrived at Djupivogur just after one. It was a pleasant fishing town, sitting at the entrance to Berufjordur, a long steep sided fjord. The town has a pretty harbour, and a museum, housed in a long red building overlooking the harbour. We sat at a table outside the Museum, and had our belated morning coffee in the sunshine. 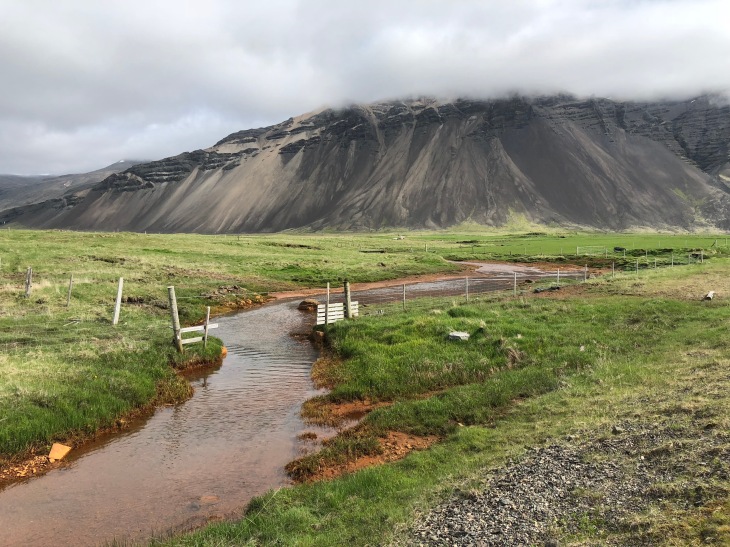 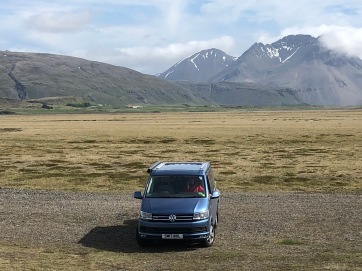 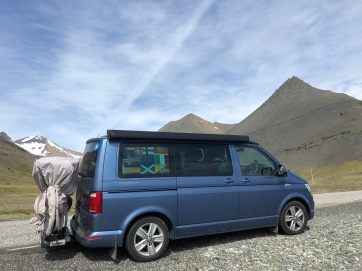 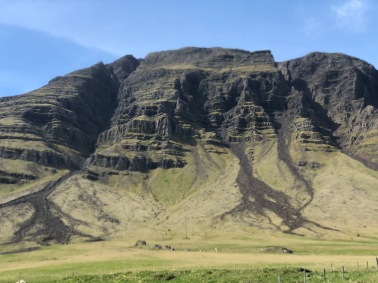 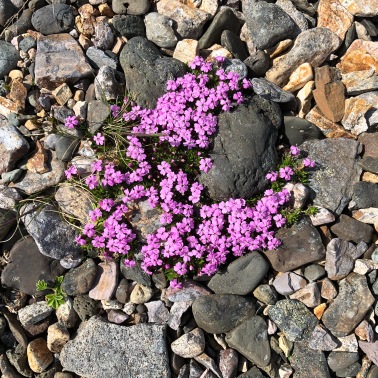 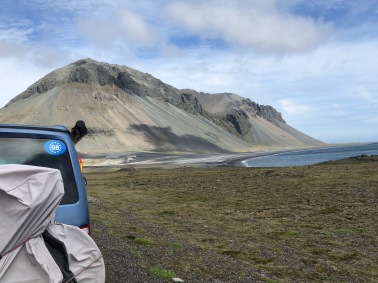 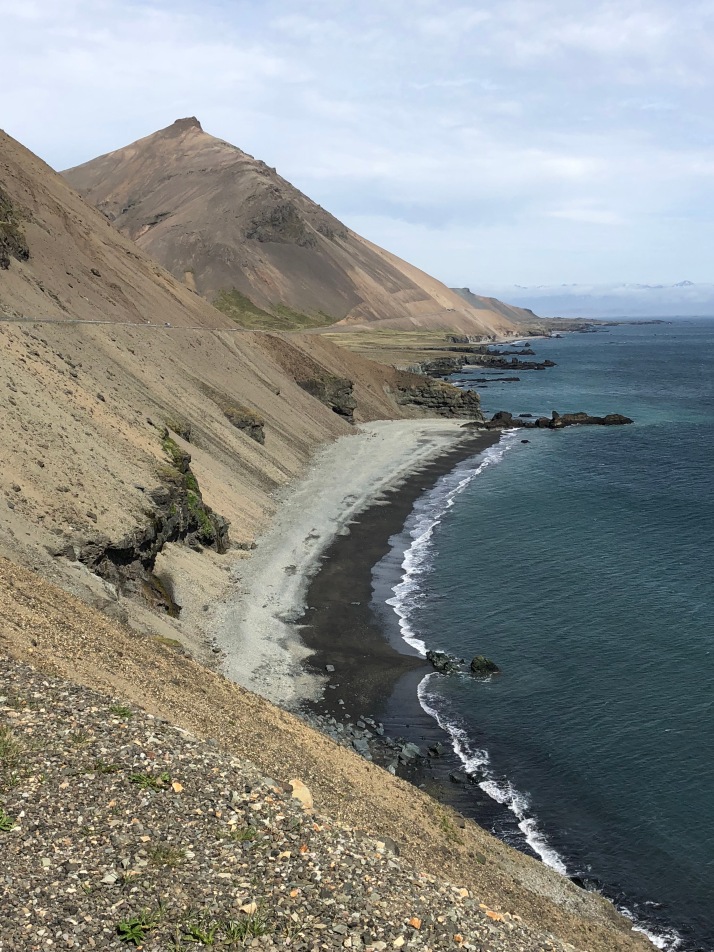 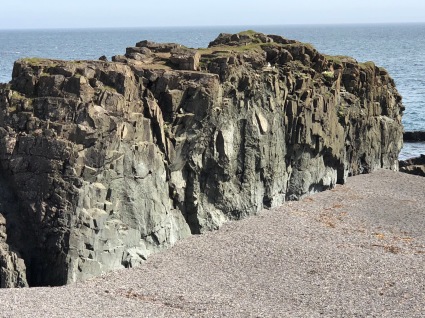 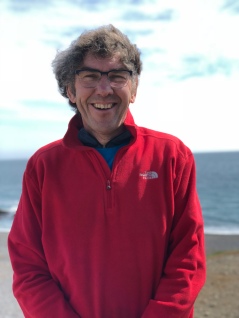 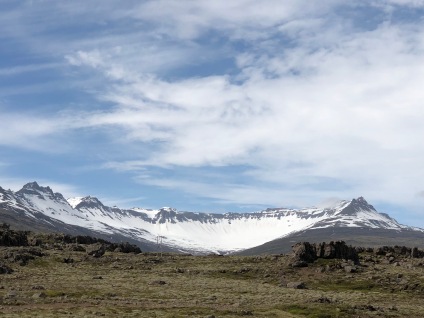 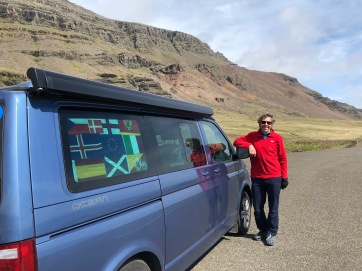 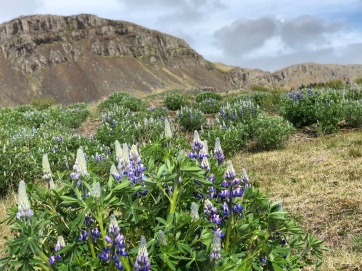 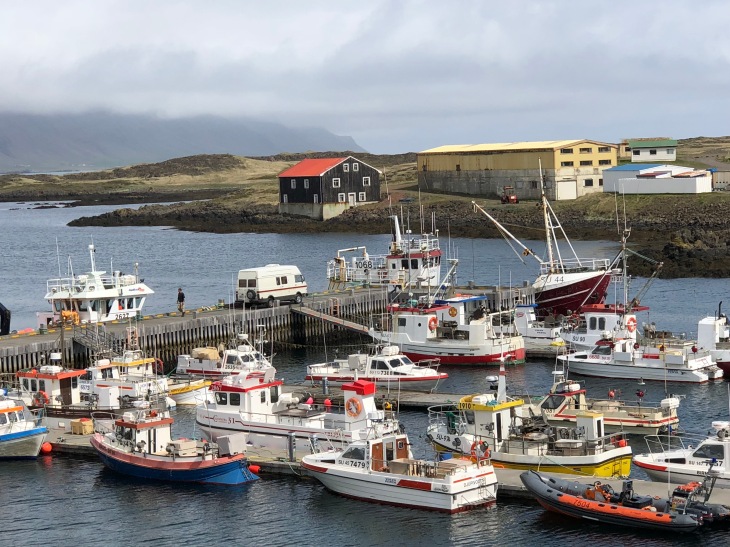 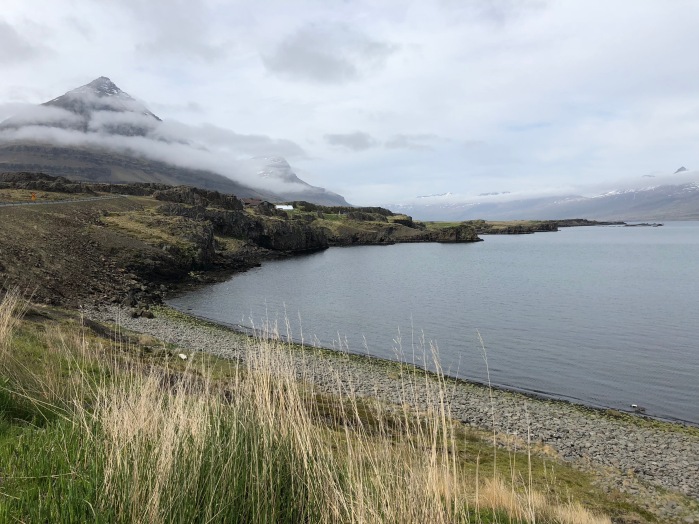 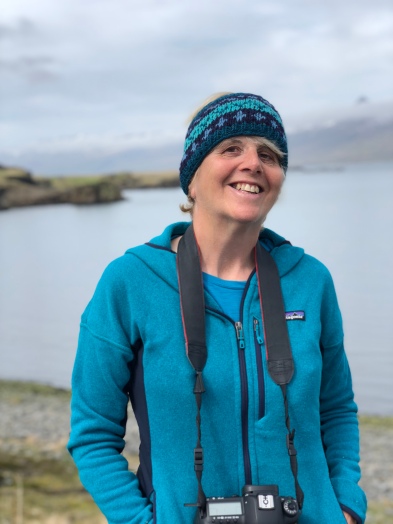 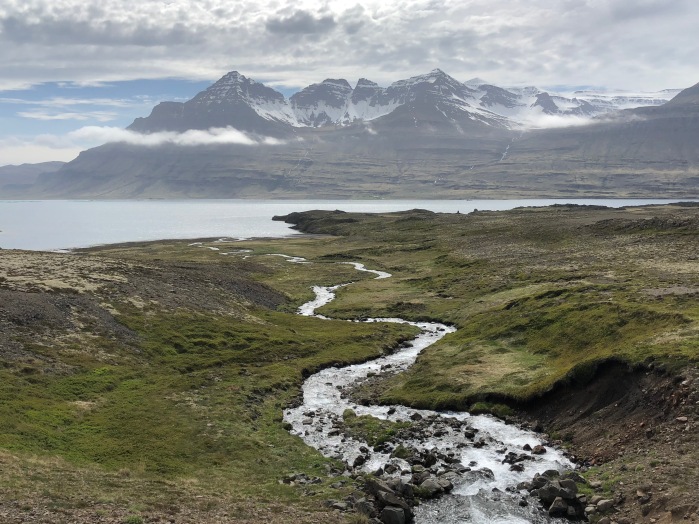 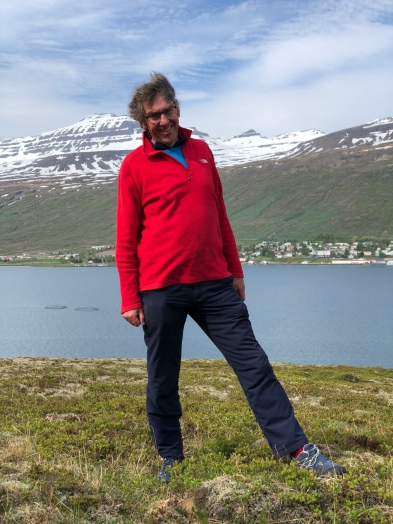 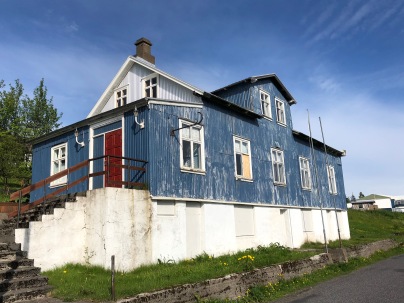 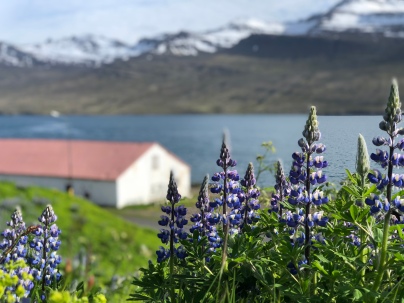 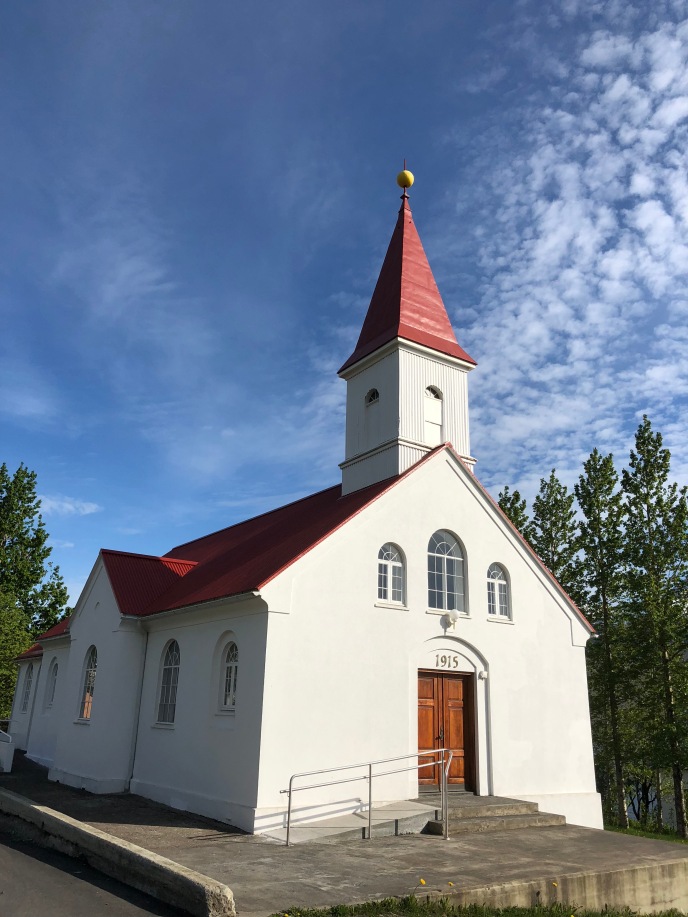 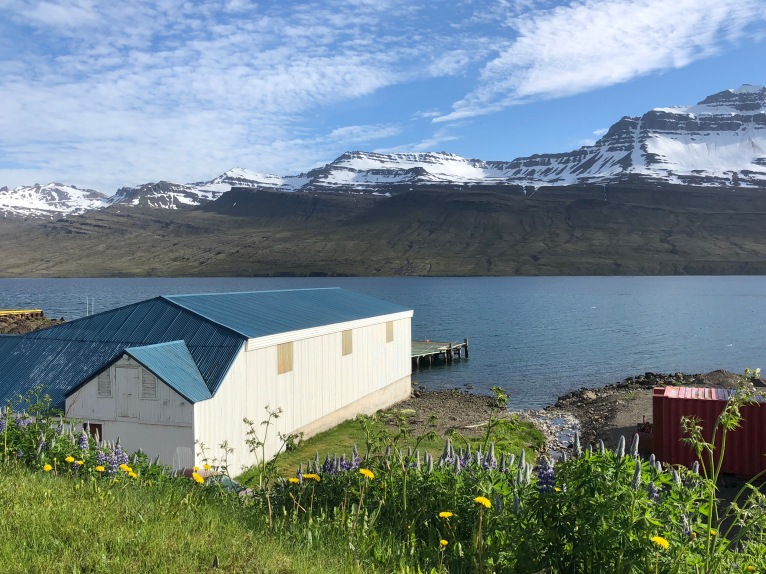 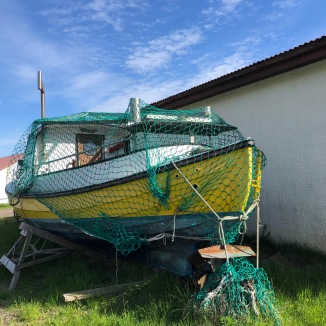 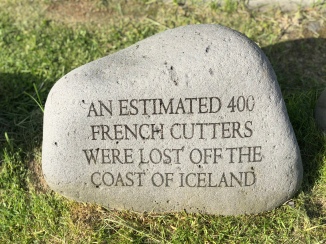 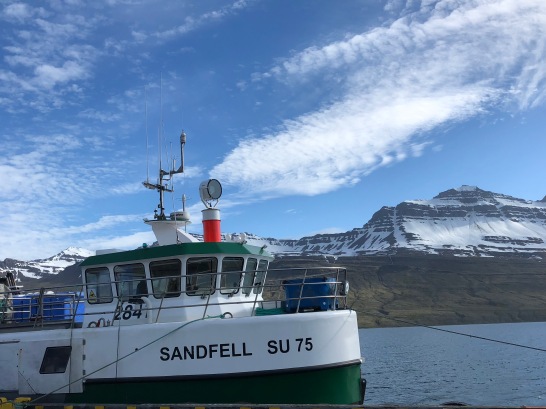 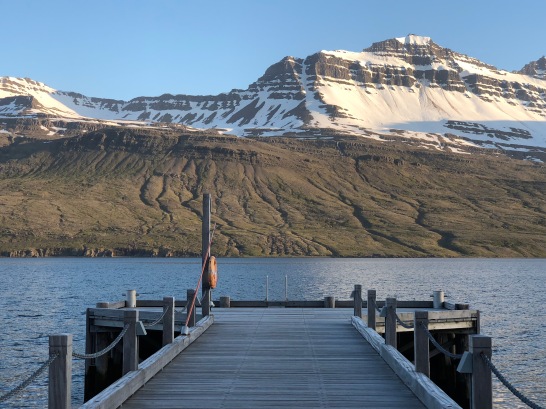 We then continued on, driving along Berufjordur. We had not anticipated the 8km stretch of gravel road that we then encountered. We were driving on Route 1, Iceland’s main ring road – but suddenly the tarmac stopped, and we were met with a very stoney pot-holed stretch of road. The extraordinary thing was that just after the gravel finished, and the tarmac re-started again, someone had been along with spray paint to mark out the slight irregularities in the tarmac road. This was within two yards of where the exceedingly uneven and bumpy gravel road had stopped. The mind boggled. So, you are going to repair these tiny little imperfections in the tarmac road, after making us drive for 8km along a frankly despicable piece of gravel track!

However, we survived our bone shaking experience, and continued on along the northern flank of Berufjordur, to a fishing village called Breidalsvik. Nothing much seemed to go on here apart from fishing, so we continued to wind our way northwards, following the undulations of the fingers of fjords. All along the route, we saw purple lupins blooming at he side of the road, growing like weeds. For a relatively short distance, as the crow flies, it took us most of the day to reach Faskrudsfjordur, our stop off for tonight.

This is idyllic settlement, set in the most glorious steep sided fjord, lined with snowy mountains. We have treated ourselves to a night in a hotel, and, it is to die for! It sits right by the side of the fjord, and our room looks across the fjord to the mountains beyond. The town of Faskrudsdfjorsdur has a huge French influence. From the 16th century until World war 1, this fjord was host to the French fishing fleet. Approximately three hundred French fishing vessels operated out of this fjord, catching predominantly cod. Around Iceland there were a thousand French fishing boats at their peak, and as a result, a French Hospital ship serviced the fleet. When this ship sank, a French Hospital was sited in this fjord to tend to the French fisherman, and was actually sited in the hotel where we are currently staying. The French influence in Faskrudsdjordur remain, with all street names being in both Icelandic and French.

The town of Faskrudsjrdur is divine. It’s setting is sublime, looking out over the fjord, and the buildings are simple, but traditionally Icelandic, with brightly coloured wrought iron roofs. It has been a lovely place to spend our penultimate evening in Iceland. We started off in the Eastern Fjords, and this is where we have returned to – with it’s natural beauty and lack of mass tourism. Tomorrow we make our way along to Seydisfordur, where we will catch our ferry back to Denmark.

It has been a very special experience spending time here in Iceland. Nothing I can say will convey the sheer beauty of this country. Despite it’s wind and rain, it is an extraordinary place to visit. It hasn’t been without it’s trials, but has undoubtedly been one of the highlights of our trip to date.