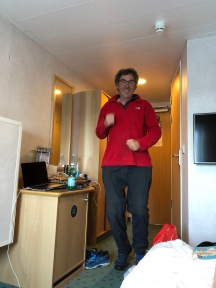 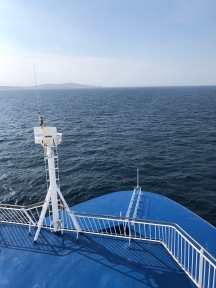 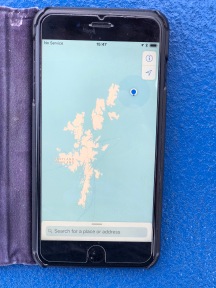 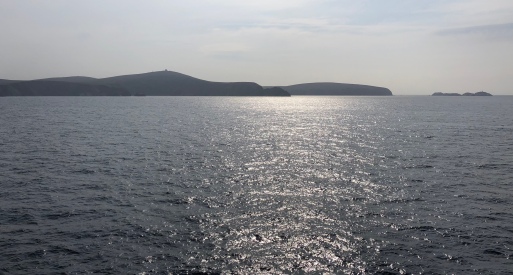 Last night I slept like a log, following my third dose of Stugeron. When I awoke in the middle of the night, it was already light – the days are clearly much longer now we have moved to a northerly latitude. This morning, Howard took himself off to the ‘gym’ in the bowels of the boat, and walked on the machine for half an hour up an imaginary hill.

After breakfast, we had a task. For those of you who know me, you may have noticed in the photos, that having lived outside for four months, the sun has bleached my hair to the blondest it has been since I was three years old. Before leaving Denmark, I had intended to visit a hairdresser to get the grey bits taken out of my roots, but the opportunity hadn’t arisen. On the recommendation of my hairdresser back home, I had squirrelled away in the van a packet of ‘Nice ’N Easy’ for such ‘emergency’ use. Having never used ‘home’ hair dye before, much against my better judgement, I enlisted Howard to help. Yes, you heard correctly, Howard!!

We decamped back to our tiny cabin, and read the instructions. Not sure about how much mess this would make, and for fear staining our clothes, we stripped to our underwear. I then watched as Howard tried desperately to prise on the plastic gloves that came with the pack, but were clearly designed to fit a woman with small hands.

I sat on the stool, and Howard mixed the two bottles as instructed, and then started squirting it on my head. I was a little taken aback when he asked me if I had any plans for the weekend! He then asked about my family – did I have any children? What were their names? What did they do? At this stage, I felt that he was taking this ‘being a hairdresser’ lark a bit too literally. Although it was pretty hard to take him seriously whilst applying the hair dye in his Y-fronts! After twenty minutes or so, I glanced in the mirror – and let out a primordial scream! It was dark brown – a completely different colour from what my hairdresser at home uses. Aarrgh!!! My immediate instinct was to wash it off, but Howard had already taken himself off to the shower, having spilt the stuff down his legs – and was screaming that his legs were on fire. OMG – if anyone had seen the pair of us!

As quickly and possible, I washed the stuff out, and tried to salvage what was left of my hair. Howard is trying to be supportive, saying things like, ‘Well it doesn’t look TOO bad’, and the such like – aka ‘Good heavens, it looks like a dog’s dinner, but I had better not tell her that!’

So that is how we occupied our morning. This afternoon, much to our surprise, we passed close by to the Shetland Islands – the closest we have been to home since the second week in January. It felt odd to have Vodaphone UK suddenly ping in. We saw gannets and fulmars pass by the boat, but sadly no cetaceans.

Howard is now absorbed in reading some scientific papers for someone, whilst I am listening to our ‘host’ read out the bingo numbers in Danish. This really is a new life experience! I’m not sure how much of this excitement I can take. Earlier, Howard had taken to running up and down our cabin, since he thought he was starting to irritate people on deck by constantly jogging up and down. Tonight, I have the live musician from last night to look forward to, so I am swotting up the lyrics of John Denver and Neil Diamond songs.

Tomorrow morning at 6am, we arrive at the Faroe Islands. Not a minute too soon!

5 thoughts on “Day 123 At sea on the North Atlantic, between Norway and the Faroe Islands.”