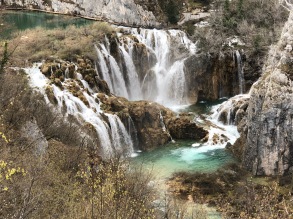 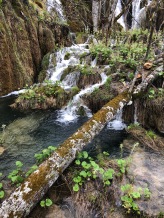 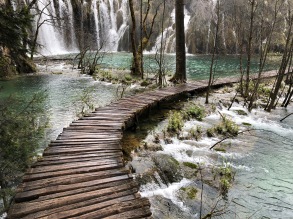 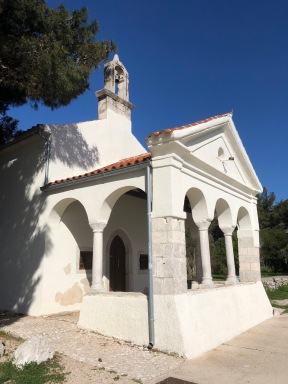 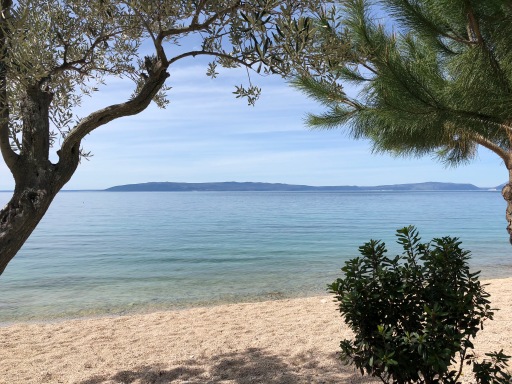 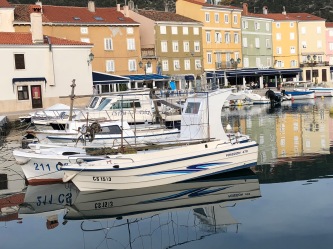 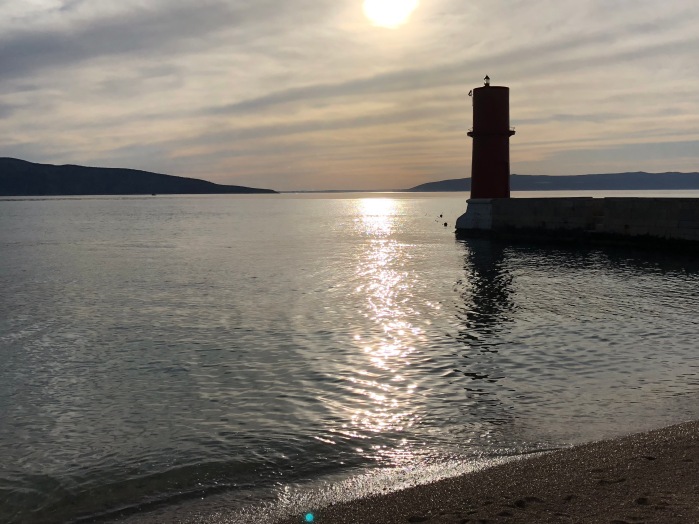 Today has been a very leisurely day today. We decided to make the most of the good weather, and stay put at this campsite for another day, especially since the weather is due to break again tomorrow.

It is a large campsite, but being early in the season, everyone is spread out and so you have plenty of space around you. The downside of being early in the season is that only sone of the wash blocks are open. We misunderstood the lady at reception when we checked in, thinking the shower block near our van was open, which in fact it isn’t. So consequently it is quite a walk to the facilities. I really don’t mind a bit of a walk, and Howard is positively delighted, since before breakfast he had clocked up over 10,000 steps just by doing his run, and being sent to the reception (twice!) for washing machine and dryer tokens. We had a delightful breakfast sat in the sun looking out over the water, and for once it was actually warm. As a result, history was made on day 94 – I got out my shorts, and Howard took off his long sleeves ice-breaker top, and put on a T-shirt!

After breakfast we became Mr. And Mrs. Wishy-Washy for a few hours. No-one else was using the wash room – so we went to town – sheets, towels, clothes, flannels, T-towels. Ah – it is so cathartic having everything clean again. Of course – I insisted Howard use a separate washing machine for his gym kit, and put in double the number of washing sachets, just to be on the safe side.

Having started the washing, we amused ourselves whilst waiting for the machines to finish, by heading off for a rather late morning coffee at the campsite cafe, situated on the point by the lighthouse. It is a sublime spot, and as we sat chatting to the owner, she was telling us about the dolphins. Around the two islands of Cres and Losinj there is a protected nature reserve for the resident dolphins. On queue, one of the locals shouted out ‘Dolphins!” – and there they were – a pod playing around in front of the cafe. What a delight! I really like this place – resident dolphins and an array of birds.

Despite only being here less than a day, I already have about twenty regular feathered friends, who keep hopping around me, tweeting to be fed – mostly chaffinches, blackbirds and a couple of goldfinches. One cheeky little chaffinch even hopped onto Howard’s sandals this morning at breakfast. They must know that I am known by my family as the mad ‘bird lady’. I even have the lodgers feeding my pheasants while we are away.

We plan a walk into town and maybe a cycle now our chores are done. It is already starting to cloud over, so I guess we have seen the best of the sunshine. But if anyone wants a recommendation for a campsite in Croatia, it is this one. Positively the nicest place we have stayed, to date.

Just before we left to walk down to the Old Town, Howard returned from the wash block and warned ‘Beware of the fat German with the fishing rod’. I thought no more about it, but decided to pay a visit to the facilities before departure. As I approached the wash block, I suddenly realised what Howard had been on about. As bold as brass, adjacent to the path to the washrooms, standing on the jetty was indeed a German with a very fat paunch, wearing a hat, a skimpy T-shirt, and absolutely nothing else! His ‘tackle’ was there for all to see. I had a momentary flashback to the times when I used to be called to casualty to remove fish-hooks from fisherman’s hands, arms and other parts of their anatomy, when their casting had gone array. I just hope the fat German was skilled at casting his line, because there was certainly a lot there to snag the hook on! Just a thought! In future, I have decided to use the washrooms in the other direction. But it just goes to show – there’s none as queer as folks!

I’m posting a few more of the photos of Plitvice Lakes at the top, which for some reason have only just downloaded today. The mysteries of the ‘cloud’!